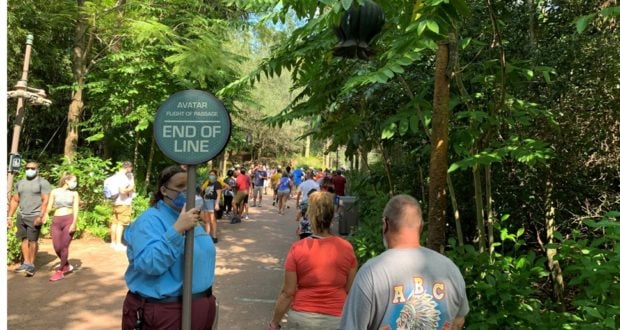 Crowd levels have been rising at Walt Disney World over the past few weeks. Walt Disney Company CEO Bob Chapek has stated that the parks are allowing 25% capacity, and that capacity will not be increased until the CDC guidelines are changed. The problem is, people are comparing the currents levels with what things looked like in the middle of July. More people are visiting Walt Disney World, which means that there are more people in the parks. It does not mean that they have increased capacity, it just means that more people are taking advantage of the ability to go.

I have been to all four theme parks countless times since they reopened. I’m a local Annual Passholder, and I’ve been fairly successful at getting Disney Park Pass reservations, even when it looked like there were none available. I’ve been going mostly on weekdays because the crowds are lighter. On Saturday, October 18, my daughter and I decided to go to Disney’s Animal Kingdom, even though we knew that the crowd level would be heavier.

We skipped rope drop, and instead arrived around noon. It was the most crowded that I’ve seen any of the parks since they reopened. Most of the crowds were centered around the rides. The Wait Times were high. Flight of Passage, for example, hovered around 105 minutes the whole time that we were there. That’s still better than three hours like before the closure, but things are not walk on right now.

Disney is keeping the lines outside as long as possible. The indoor queues are not being utilized, you will mostly walk through that part. Because of this, the lines were all incredibly long. Pandora was the worst. The line for Na’vi River Journey wound past the Discovery Island entrance to the land. The line for Flight of Passage went all the way into Africa! Some of the areas of Pandora were marked one-way, with Cast Members with ropes only allowing people in if they met certain conditions.

Part of the problem was also that Expedition Everest was not running. That meant that there were only seven attractions. The only one that we visited was It’s Tough to Be a Bug. The posted wait was 40 minutes, and we were seated 39 minutes after we got in line. In my experience lately, the Wait Times are starting to be more accurate.

Often when Disney’s Animal Kingdom is crowded, I’ll spend some time on the trails. We did just that, and it was a good idea. The trails weren’t crowded, and I like that I can go at my own pace. I could watch the meerkats all day.

We ordered food twice. We first stopped by Tamu Tamu Refreshments for the Simba Sunset. Mobile Ordering is not available there, and there was a bit of a line. It did move quickly. The woman at the window was incredible, she was friendly and I’m sure that she had a smile under her mask. She kept the line moving, and she wasn’t frustrated that things were so busy. If you’re a fan of Dole Whip, you’ll want to try the Simba Sunset. It’s pineapple Dole Whip, but it also has watermelon, strawberry, and pineapple syrup. Like regular Dole Whip, it’s plant-based. You might want to consider mixing the syrup in when you get to the bottom because it’s very, very sweet.

The second time we ordered food it was from Satu’li Canteen. This has become my favorite quick-service restaurant at Walt Disney World. I’m vegetarian, and it’s nice to have a quick option that is as creative as it is delicious. Another thing that I like about Satu’li Canteen is the speed. Mobile Ordering has been slow in a lot of places, but not here. Our food was ready five minutes after I hit the “I’m here, prepare my order” button on the My Disney Experience App.

People were mostly social distancing while I was at Disney’s Animal Kingdom. The exception to this for us was Winged Encounters – The Kingdom Takes Flight. This is the bird show in the front of the park, and it is a wonder to watch! People seemed to stand too close to each other when they realized what was going on. It’s outdoors, so that should help, but not all guests were aware of how close they were to other parties.

Even with longer waits, it’s still possible to do everything at Disney’s Animal Kingdom, with time to spare. It looks like the days of heading directly to Flight of Passage at rope drop have returned. From there, start to make your way around the park. The two longest lines for the most part have been for Flight of Passage and Na’vi River Journey. If you get those out of the way, you’ll then feel like the rest of the lines are shorter. If you plan to spend the full day at Disney’s Animal Kingdom, you might have time to ride something twice; even on a Saturday.