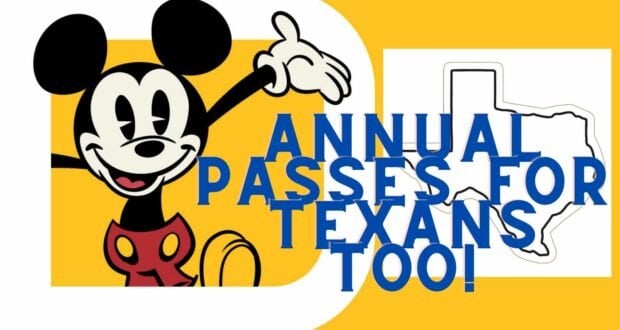 Columnist wants Disney fans in Texas to know they can get Annual Passes too!

A contributor for the Click2Houston website at KPRC News took time from her busy schedule to pen a post, assuring any Disney World fans living in the Lone Star State that Disney hasn’t left them out of the new Annual Pass program the park unveiled in late August. 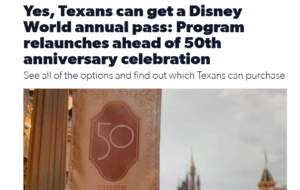 Briana Edwards, the author of the post, was careful to outline all four passes now offered at Disney World as part of the revamped Annual Passholder program.

Passes were first made available for purchase yesterday, and the internet was abuzz with Guests who were excited to finally have one in their hands, like this man, who knows exactly how he’ll be spending his time now that he has his pass.

Now that I have a #DisneyWorld annual pass, this will be my permanent state pic.twitter.com/zeeZoxfnHI

Some fans had plans for immediate use of their new-found treasure. @NekuraTargaryen says he’s going to be doing a lot more vlogging, thanks to the annual pass he just scored.

And just like that, ya boy is a #DisneyWorld Annual Pass holder! Celebrating by hitting up #Epcot Food & Wine tonight! Also gonna be able to make more Disney vlogs with the pass, look forward to them! pic.twitter.com/M2VSHE5TE5

Another Disney fan, who says a man just bought an annual pass one for her, isn’t complaining.

This fan was lucky enough to buy an annual pass for her husband that’s also good for 78 years! Oh, technology, how we love thy glitches!

Just got my husband his Annual Pass and to my surprise is says it’s good for till he’s dead apparently 😅 Umm Disney . #Disney #Disneyannualpass #Disneyworld pic.twitter.com/hchoW9BYM3

And for everything that could be said in a tweet, this user’s words are more of what we need to be hearing today. She doesn’t care for Mr. Chapek, mind you, but she’s ecstatic for those who got their passes. Thanks, @DisKneeNerd!

Do I despise Bob Chapek with every bone in my body? Absolutely. Am I still going to support and be happy for those who get an Annual Pass today? You bet. Each and every one of you deserve happiness after everything we’ve gone through. Happy Passholder day everyone #DisneyWorld

Who would have thought a Houston, Texas-based news channel would report on the Disney World Annual Pass Program? You might be surprised to know how many Texans (and other out-of-towners) make the trip to the parks, many who–believe it or not–are not always aware that an annual pass is available to them.

After all, who’s going to use an annual pass when they live so far away?

Some of us come 900 miles to see Mickey, and others come more than 1700 miles–and every distance in between. 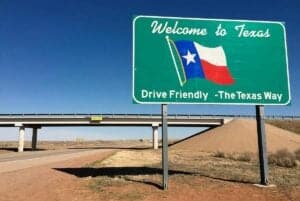 Yes, you can start out in Texas, drive 800 miles and still be in Texas in some spots. It’s a big place out here.

If you, like we Texans, don’t live in the Sunshine State, Disney’s new Incredi-Pass is for you. It’s the only one offered to non-Florida residents, and it functions a lot like the Platinum Pass in the old annual pass program. The difference is in the price and in the fact that PhotoPass is not part of the pass.

Do you have your annual pass yet? Are you planning to get one, or have you decided to skip yours this time? We’d love to hear from you!