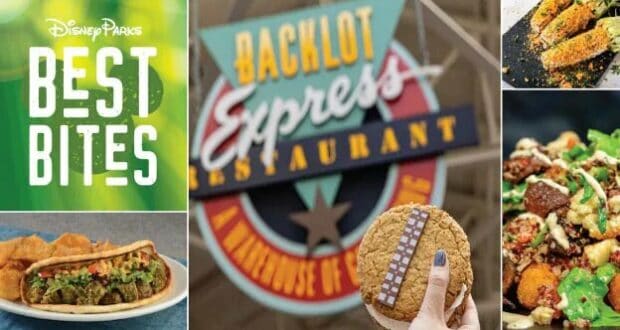 These new bites for Spring 2022 are sure to thrill Guests with plenty of fresh ingredients and bold flavors! Let’s check out all the Disney food goodness coming soon to these dining locations in the Disney Parks and Disney Resorts that Guests can enjoy on any Disney vacation! 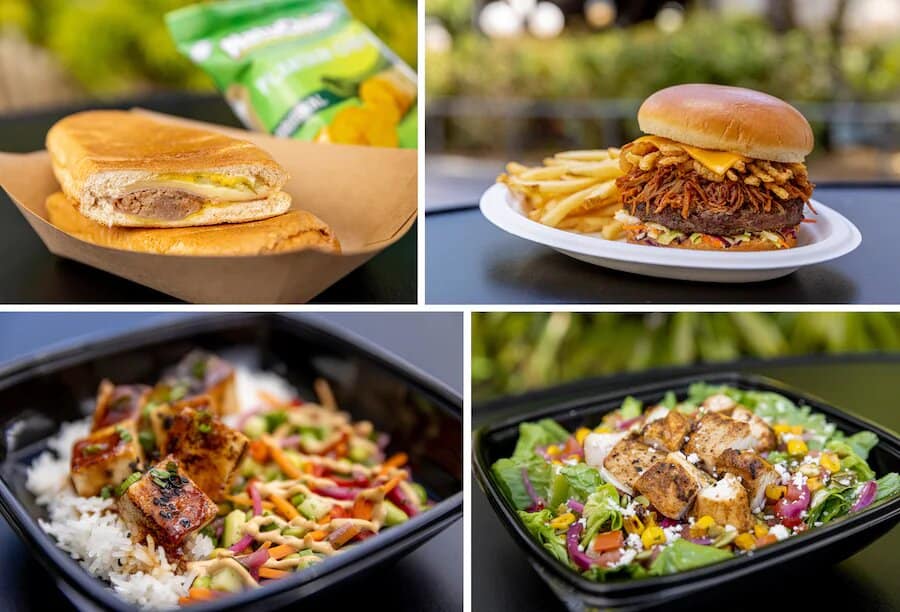 Backlot Express in the Echo Lake area of Disney’s Hollywood Studios is a quick-service location open daily for lunch and dinner that is getting an entirely revamped menu starting on March 29th. Delicious entrée options that will soon be available will include a Cuban Sandwich, Smoked BBQ Pulled Pork Burger, Teriyaki Tofu Bowl, and Chicken Southwest Salad. The popular Wookie Cookie will also be available for Guests to enjoy while paying tribute to Chewbacca from Star Wars!

Jumping over to the Africa section of Disney’s Animal Kingdom, Kusafiri Coffee Shop & Bakery is getting a duo of new savory options to enjoy during the lunch and dinner periods each day. Soon Guests will be able to enjoy a Marinated Pork Flatbread Sandwich featuring marinated pork, cucumber-tomato salad, harissa aioli, and greens paired with house-made chips and Spiced Potato Hand Pies stuffed with seasonal vegetables and potatoes and perfectly fried. 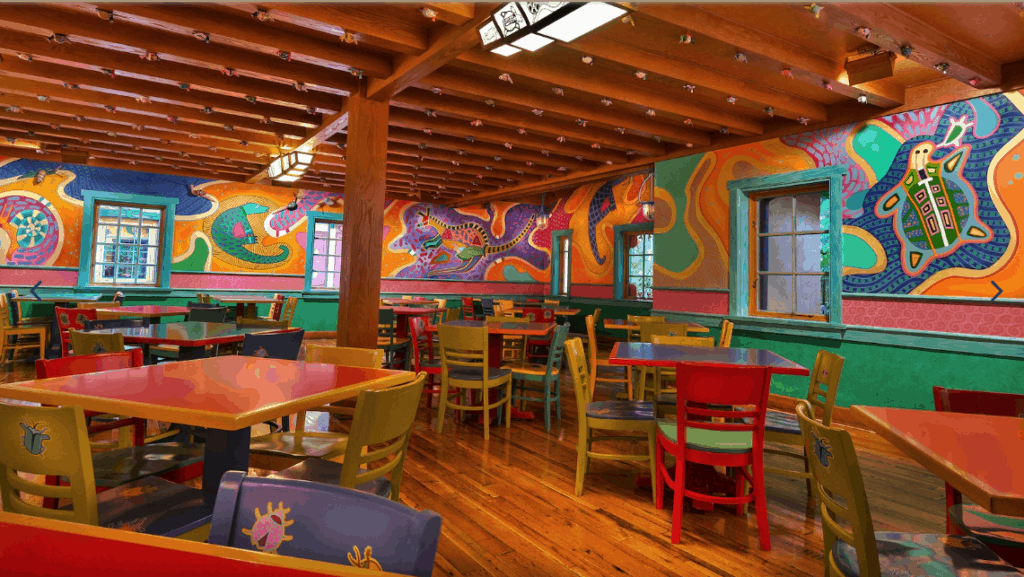 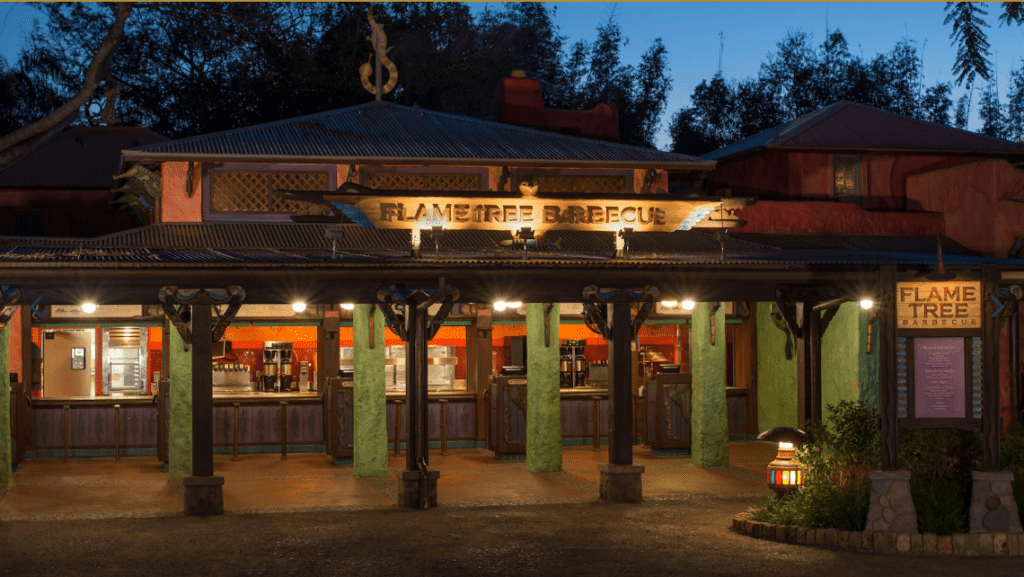 The second Wilderness Explorer Cupcake coming to Disney’s Animal Kingdom can be found at Flame Tree Barbecue, a popular quick service location on Discovery Island that is well-known for its savory barbecue options. The Dragonfly Badge Cupcake will feature a pink lemonade flavor with strawberry compote filling, lemon frosting, and a dragonfly medallion on top. 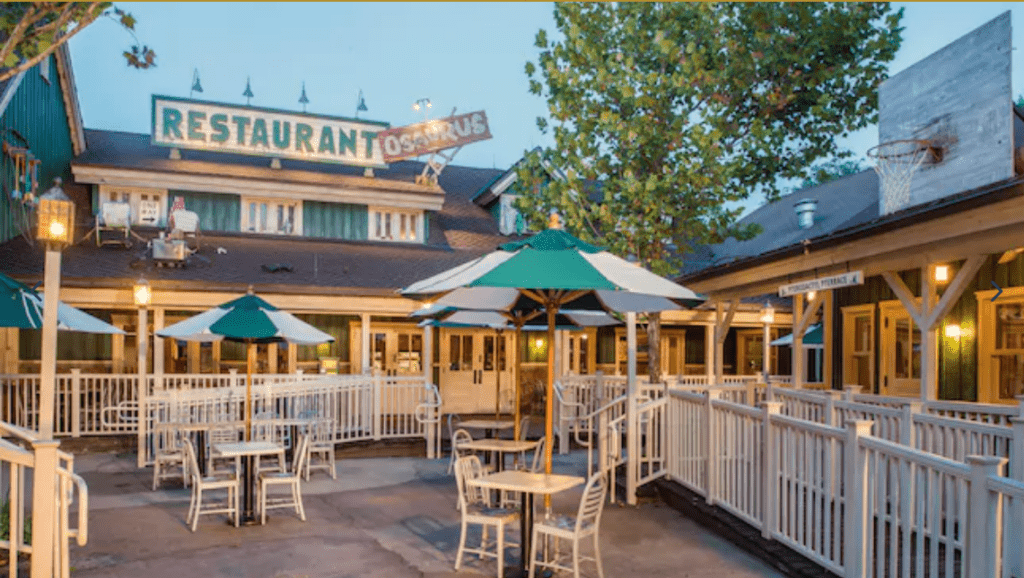 The final Wilderness Explorer Cupcake to be found in Disney’s Animal Kingdom will be served at Restaurantosaurus in the Dinoland area of the Disney Park. While enjoying the quirky atmosphere of the quick service location, Guests will be able to order the Dinosaur Badge Cupcake which will feature a chocolate cake with a cookie cheesecake filling, chocolate frosting, and white chocolate dinosaur badge. 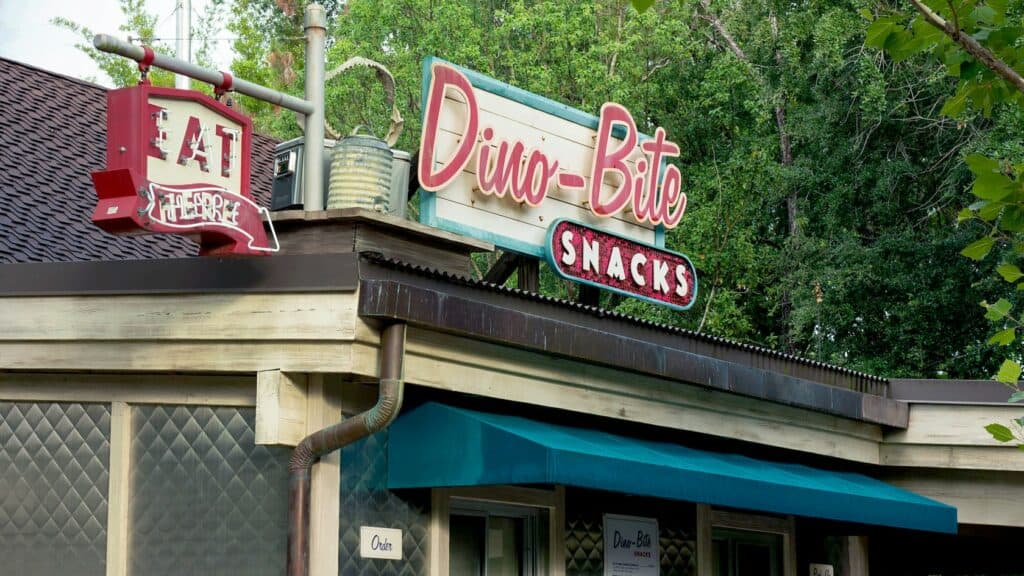 Also found in Dinoland at Disney’s Animal Kingdom is Dino-Bite Snacks, a quick-service counter that serves up some tasty treats throughout each day. Soon Guests will be able to order Cold Brew Iced Coffee for a pick me up or the even more indulgent Cold Brew Coffee Ice Cream Float. 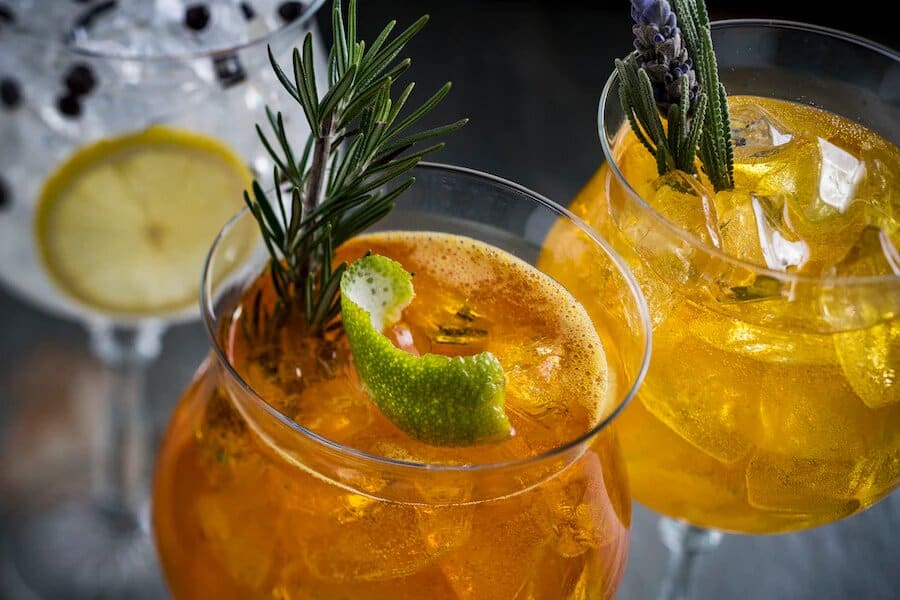 Moving over to the Disney Resorts, several locations will be gaining some exciting new menu options starting with the Barcelona Lounge at Disney’s Coronado Springs Resort. Guests will be able to enjoy live music on Wednesday and Thursday evenings as well as a Build-Your-Own Gin and Tonic experience where they can craft their perfect cocktail to sip while listening to the live entertainment.

Disney’s Port Orleans Resort – French Quarter will be getting several exciting new menu options at Scat Cat’s Club Lounge where live music and jazz can be heard on most nights. Soon Guests will be able to enjoy a trio of powdered sugar-covered Mickey Beignets served with red pepper jelly, pimento cheese, and green goddess dressing. Also on the menu will be an Oyster Beignet Po’Boy with fried oysters, lettuce, tomato, Cajun remoulade, and house-made pickled sandwiched between two Mickey Beignets and served with a side of potato chips. 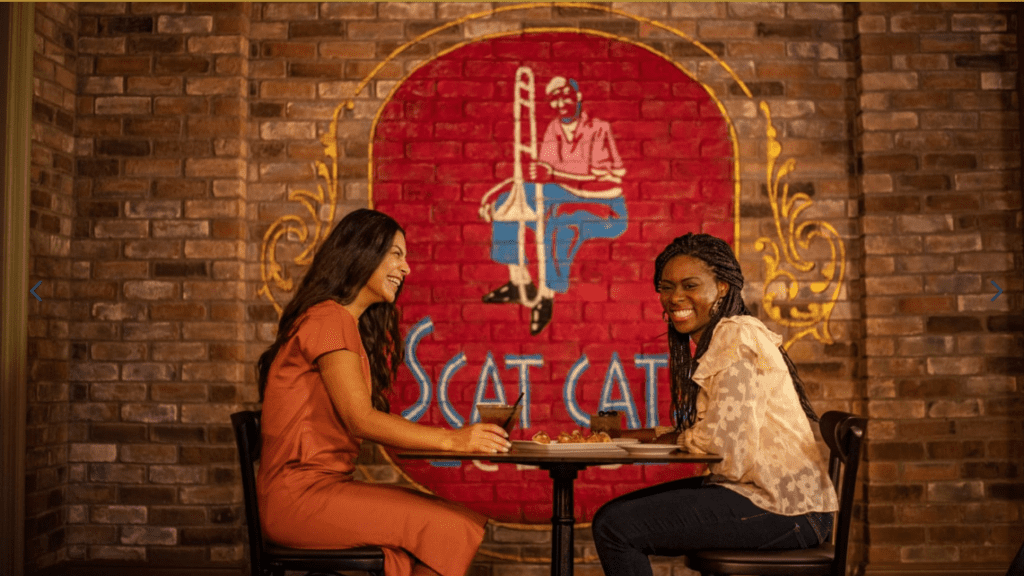 Scat Cat’s Club – Lounge will also be getting some new specialty beverages for Guests to sip on including the Bebop Bloody Mary which will top vodka and a spicy bloody Mary mix with shrimp, Andouille sausage, and celery. The Syncopation Shift will feature vodka, rum, mango rum, melon liqueur, pineapple juice, and a glow cube for a festive option or Guests can opt for the Bonfamilles Bourbon Peach Iced Tea featuring a blend of bourbon, peach schnapps, and fresh-brewed sweet tea. 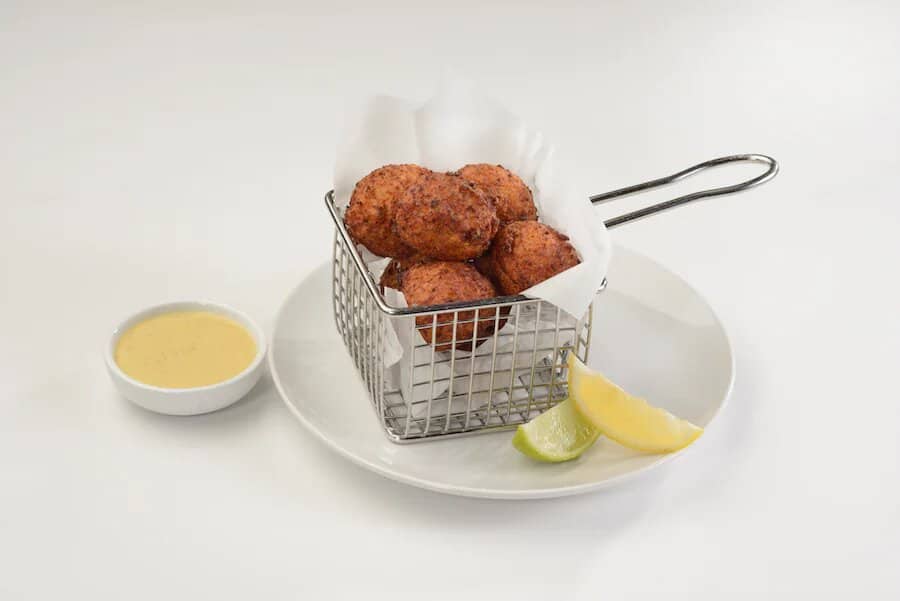 Both Olivia’s Café and Gurgling Suitcase Libations & Spirits at Disney’s Old Key West Resort will be gaining a new menu item that was designed to support sustainable seafood initiatives while bringing some serious flavor. The Shrimp Fritters will be perfectly fried and served with citrus wedges and a dipping sauce. 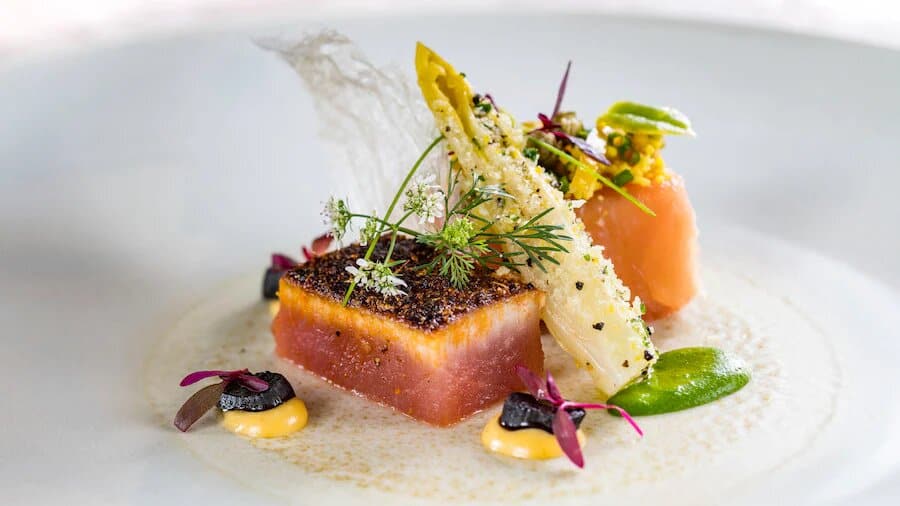 One of the most exciting foodie announcements for 2022 is the return of Victoria & Albert’s at Disney’s Grand Floridian Resort & Spa! While the signature dining restaurant famous for its tasting menus and opulent charm won’t be returning until later this year, we can’t wait for its wonderful reopening! 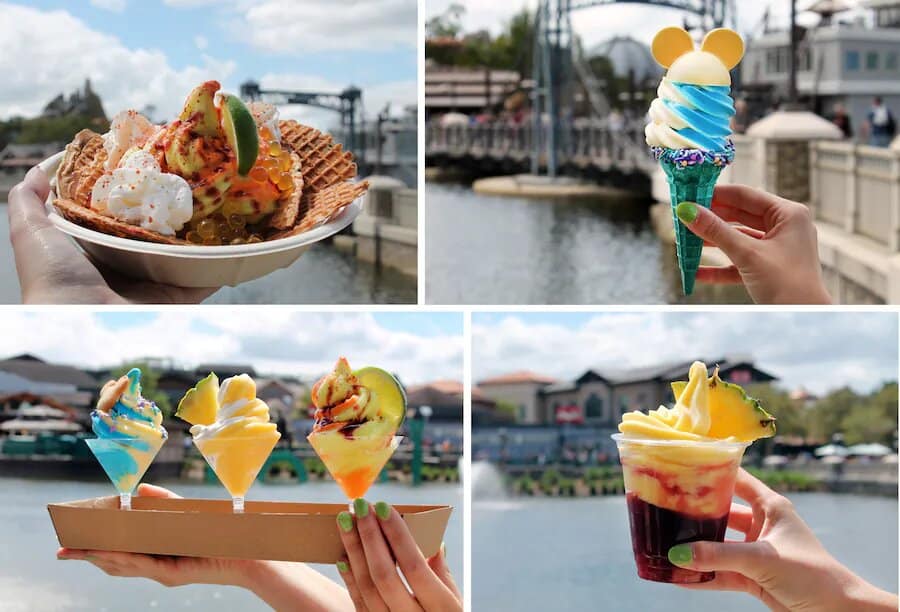 Swirls on the Water – Disney Springs

Disney Springs will also be getting some exciting new foodie options including the Swirls on the Water kiosk. Starting March 15th Guests will be able to enjoy an array of inventive cold treats like their signature DOLE Whip Lime & Habanero Soft-serve Nachos with a bed of waffle cone chips topped with Dole Whip lime and habanero soft serve, mango boba pearls, Tajin spice, raspberry sauce, and whipped cream. Also available will be the 50th Celebration Cone with a swirl of DOLE Whip lemon and cookie dough soft serve, the Dole Whip Flight with six featured flavors, and the Sangria Float with a blend of DOLE Whip and red wine sangria.

RELATED: Here’s What We Love About Disney Springs Food Trucks

The Disneyland Resort is also getting some exciting new food options as the Red Rose Taverne in Disneyland Park resumes serving breakfast! Guests can dig into the Beast Breakfast Burger which tops a toasted bun with Angus patty, bacon-orange marmalade, egg, and arugula with a side of potato bites as well as the Vegetable Quinoa Breakfast Bowl with quinoa, roasted mushrooms, cauliflower, arugula, tomato, potato bites, and spicy lime aioli.