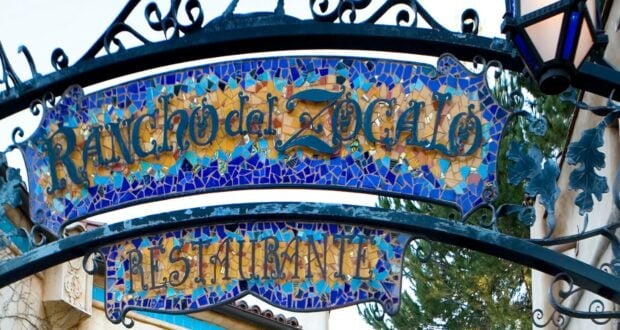 If you are someone who has certain restrictions on the food you eat – be it keto, gluten-free, vegan, or maybe you have specific food allergies – it can be difficult to find restaurants that are able to meet your specific needs. Luckily, the Disneyland Resort is wonderful at accommodating Guests will all types of dietary needs, and they don’t sacrifice one bit of flavor. 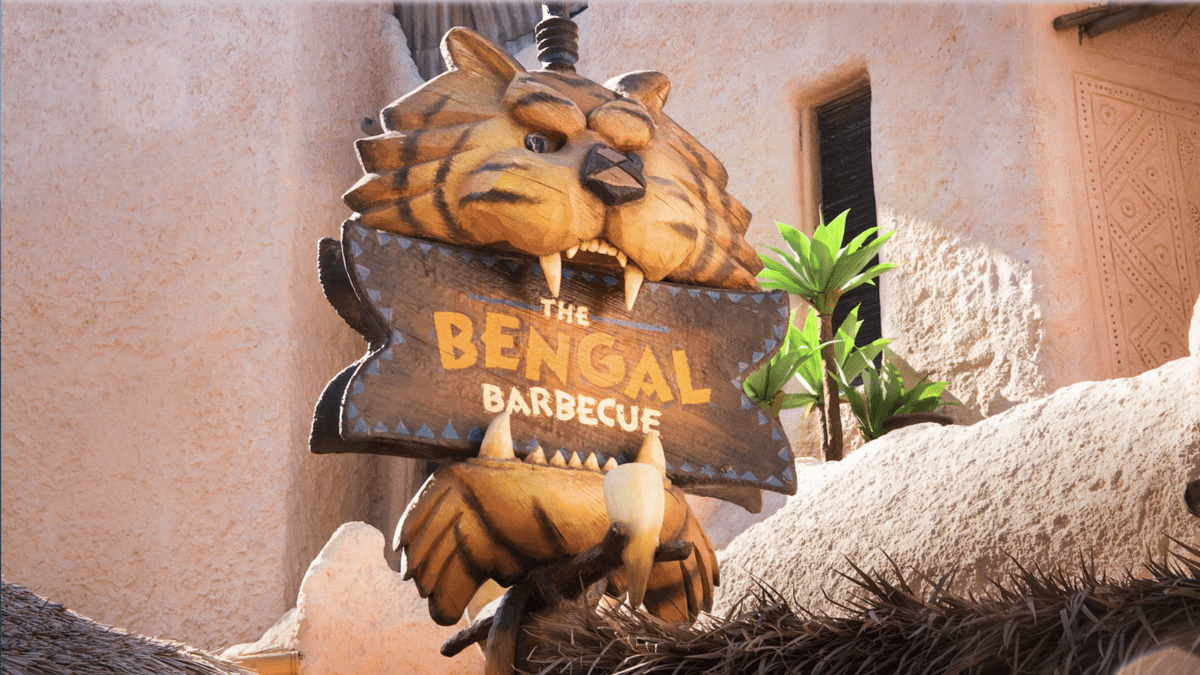 Let’s take a look at some of the best vegan quick-service dishes you can find at Disneyland Park.

Bengal BBQ is an extremely popular quick-service location that can be found across from Indiana Jones Adventure and The Jungle Cruise in Adventureland. Bengal BBQ has two delicious options that are perfect for those who are eating vegan. 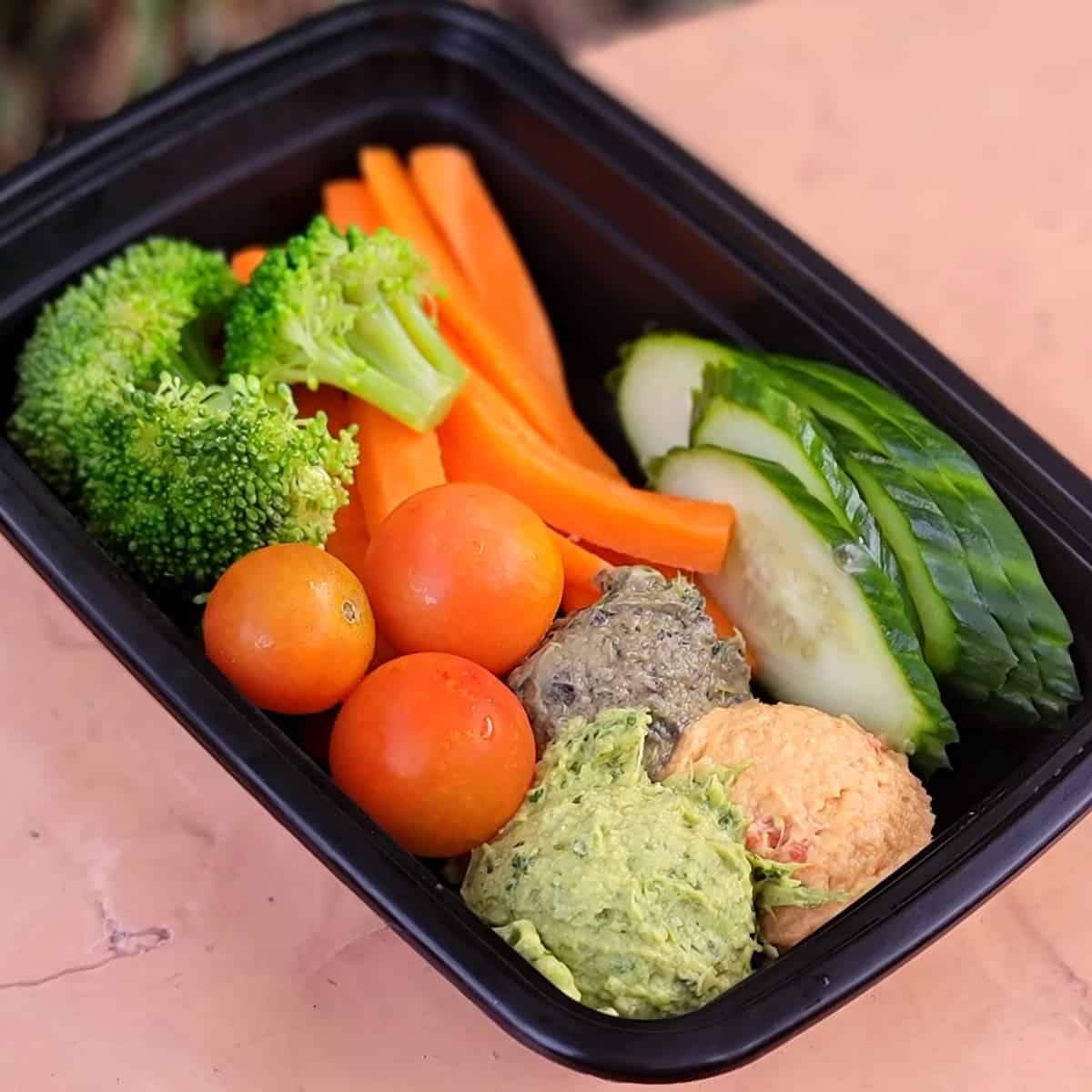 The second option is the hummus plate. The plate comes with three different types of hummus – all of which are vegan – and are served with fresh vegetables. According to the menu, the hummus offerings are seasonal, so there will usually always be a traditional hummus, but the others that it is paired with may differ.

If you would like something a little smaller, or maybe something to cool you down on a hot day, Bengal BBQ also offers ready-to-go pineapple spears and house-made dill pickles that come in original or spicy. Both the pickles and the pineapple spears can be found throughout Disneyland.

Docking Bay 7 is one of the newest quick-service locations at Disneyland Park. The new dining spot opened in 2019 when Star Wars: Galaxy’s Edge opened to the public. While most of the meals contain some sort of meat or dairy, there is one dish that is sure to please vegan and non-vegan diners alike.

The Felucian Kefta & Hummus Garden Spread is made with Impossible meatballs and served with an herb hummus, tomato-cucumber relish, and pitas that are perfect for dipping. 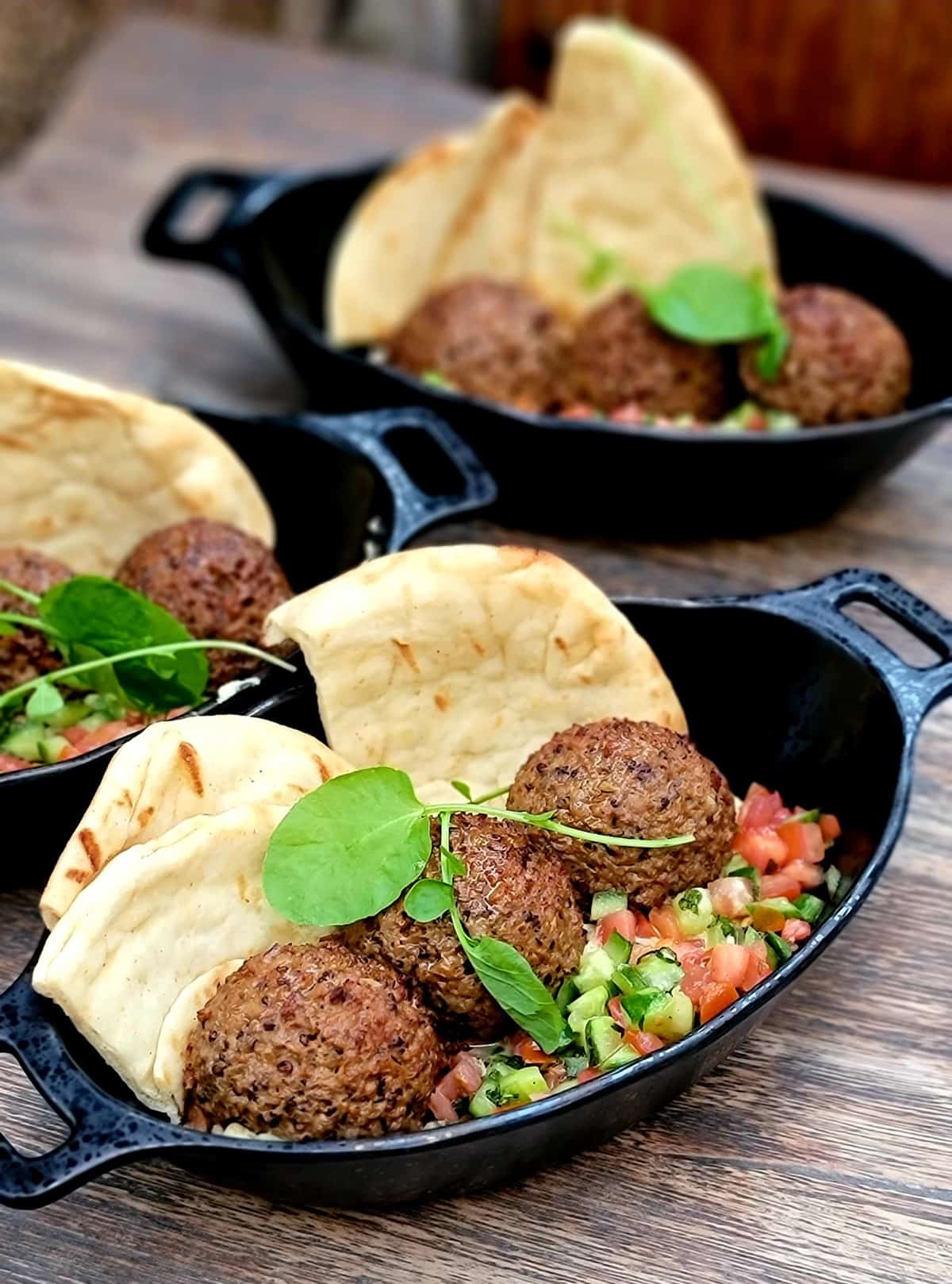 This may be one of my favorite vegan dishes in all of Disneyland Resort. We ordered both the original Ronto and the Ronto-less Garden Wrap, and I actually preferred the vegan option, which I thought tasted like the inside of a pot sticker.

The Ronto-less Garden Wrap is made with a plant-based sausage, spicy Kimchi slaw, sweet pickled cucumber, plant-based Gochujang spread and wrapped in a pita. 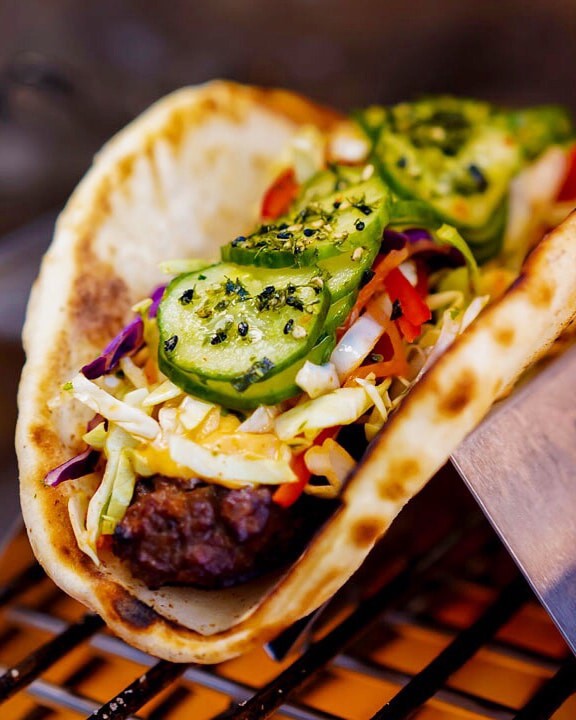 The French Market and Royal Street Veranda are located in New Orleans Square and are both popular places to eat for those who are craving some southern food. The quick-service spots are known for their gumbo, and you can even get a vegan version!

While it has been said that you can order the vegan option through mobile order, multiple Guests have said that the option to customize your order is not always available. However, walk-up ordering is still available, so Guests can go to the eatery and ask the Cast Members to make their gumbo vegan. 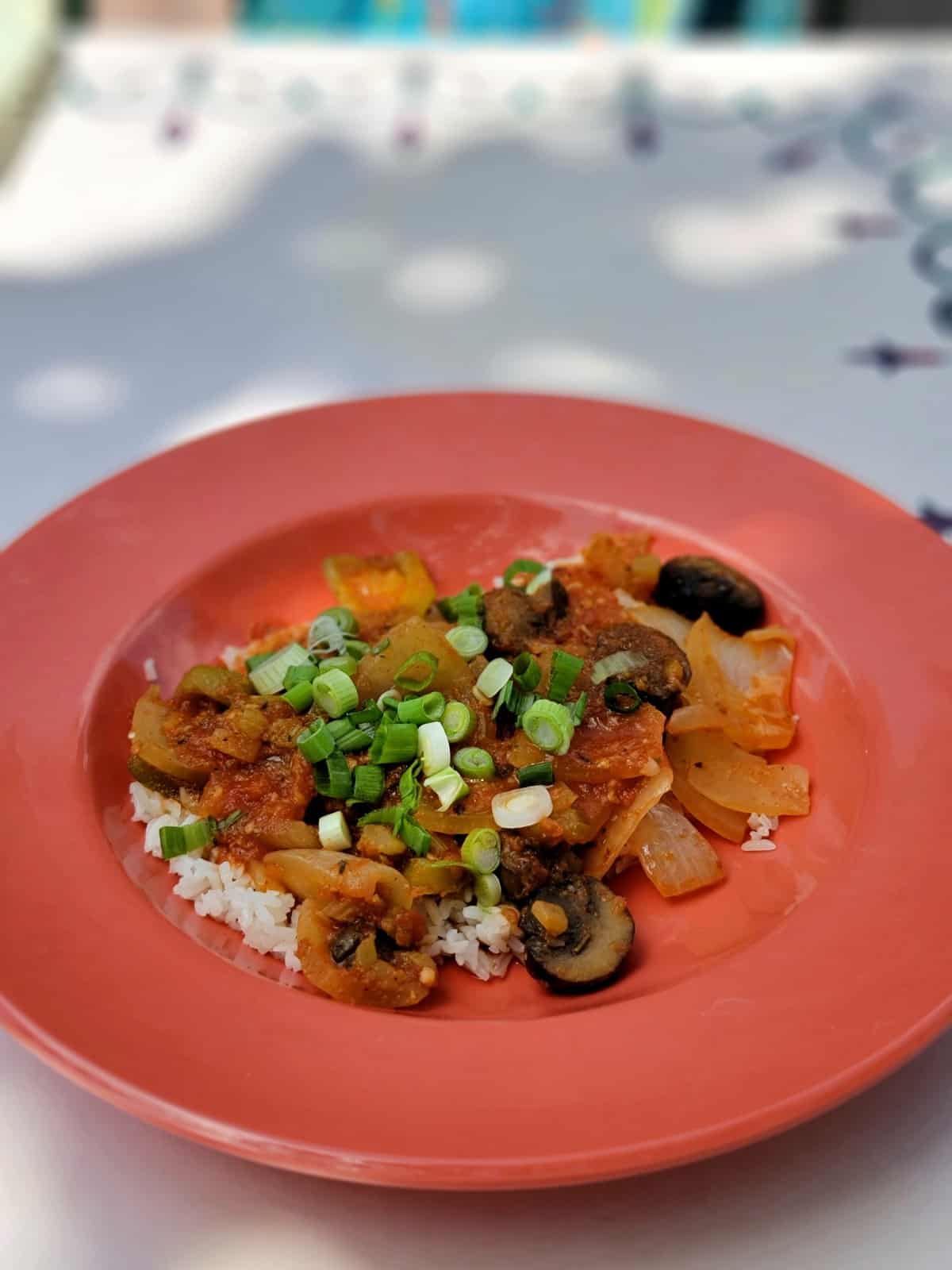 The veggie wrap from Galactic Grill in Tomorrowland is a great way to fill up your belly while still getting something full of flavor. The veggie wrap is made primarily of black beans and fire-roasted corn. The is also stuffed with mixed greens, dairy-free cheese, and a sun-dried tomato spread. The wrap is served with either a side of fruit or French fries.

Sometimes there is nothing more satisfying than biting into a big, juicy cheeseburger and, if you are vegan, you can get your own version of the American classic at the Hungry Bear Restaurant in Critter Country (right by Splash Mountain). 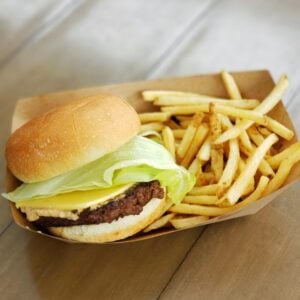 Credit: The Happiest Vegan on Earth

The Classic Impossible Cheeseburger is made with Impossible meat and dairy-free cheese. Lettuce and a vegan house-made sauce also come on the burger. For a side, you can select either mandarin oranges or French fries.

If you are craving some delicious Mexican vegan food, look no further than Rancho del Zocalo in Frontierland. The popular restaurant features delicious fare like burritos and tacos – and almost everything can be made vegan, like the cauliflower tacos. The tacos are topped with cabbage slaw and served with a side of Mexican rice and refried beans, both of which are also vegan. 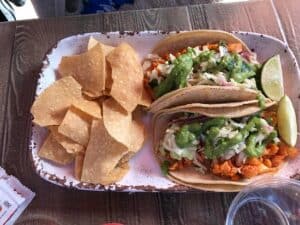 Guests eating at Rancho del Zocalo can also purchase two types of chips – one sweet and one more savory. The savory chips are crispy chips with lime, and the sweet chips are rolled in cinnamon sugar. They come in to-go bags, so you can easily pull them out for a snack later.

Rancho del Zocalo also allows Guests to customize their orders, meaning that you can create your own vegan tostada or burrito! All you have to do is ask for the marinated cauliflower with all of the veggies you like in it. Just be sure to specify that you do not want any dairy like cheese or sour cream.

Cauliflower is an incredibly popular option for vegans. They are hearty and filling and pair with so many bold flavors. Guests who would like some cauliflower in the form of a burger can head over to Red Rose Taverne in Fantasyland. The Enchanted Cauli-Flower Burger is served with vegan spicy lime aioli, lettuce, and stewed tomatoes. It is served on vegan bread and comes with either a mandarin orange or French fries. 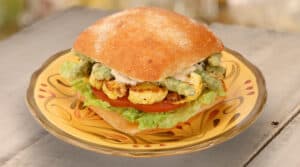 Disney truly works hard to make sure that Guests are able to find something to enjoy, no matter what their diet is. We hope that you find this list of Disneyland quick-service meals helpful on your next trip to the Happiest Place on Earth.