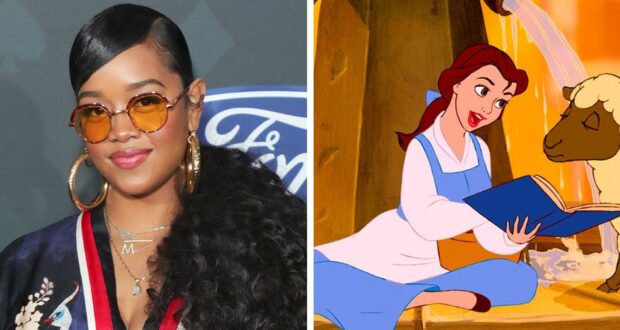 ABC’s Live-Action ‘Beauty and the Beast’ Special Has Cast Its Belle!

It seems nearly impossible to believe, but this year, Disney is celebrating the 30th anniversary of its classic film, Beauty and the Beast. That’s right, 30 years ago, audiences were introduced to Belle, the Beast, Lumiere, Mrs. Potts, Cogsworth, Gaston, and more. Disney wants to celebrate the special anniversary of its Oscar-winning movie and, on December 15, Disney and ABC will air a special live-action/animated version of the film. We already knew that the special will be directed by Jon M. Chu — who also directed Crazy Rich Asians — and now Disney has revealed that they have cast Belle! Disney has revealed that the role of Belle will be played by Grammy-winning artist H.E.R. After the news was shared, H.E.R. — born Gabriella Wilson — released a statement, saying she was incredibly excited to play one of Disney’s most famous princesses. The statement, shared by The Hollywood Reporter, read:

“I can’t believe I get to be a part of the Beauty and the Beast legacy. The world will see a Black and Filipino Belle! I have always wanted to be a Disney princess, and I get to work with two wonderful directors Hamish Hamilton and my favorite, Jon M. Chu. It is very surreal and I couldn’t be more grateful.”

Jon M. Chu also released a statement and said that he was very excited to work with H.E.R. on such a special event.

“With her obvious extraordinary talent and stage presence, H.E.R. is the perfect embodiment of our Belle, and we are thrilled for audiences to see her in this celebration of creativity. We were both influenced as storytellers by the original animated movie, so it’s very exciting to collaborate together to honor the artistry of that timeless classic while also inspiring a whole new generation of creators.” The Hollywood Reporter was the first to report on the special anniversary show, revealing the following:

The Disney-backed broadcast network is making a two-hour, live-action/animated special that will feature a new cast and air Dec. 15 on the broadcast network. Jon M. Chu (In the Heights, Wicked) is on board to executive produce the project, which will be directed by Hamish Hamilton. The latter is best known for helming awards shows including the Emmys and Grammys, as well as the Super Bowl halftime show, ABC’s The Little Mermaid Live and a pair of Disney’s quarantine-era singalongs. Disney’s live-action/animated Beauty and the Beast special will air on ABC on December 15 and will then be made available on December 16 to all Disney+ subscribers. The special is exciting news to all Beauty and the Beast fans, especially since Disney broke the news that it was indefinitely delaying — most likely canceling — the spinoff series, Little Town. The show was set to star Josh Gad and Luke Evans as LeFou and Gaston and tell their story before they ended up in Belle’s provincial town.