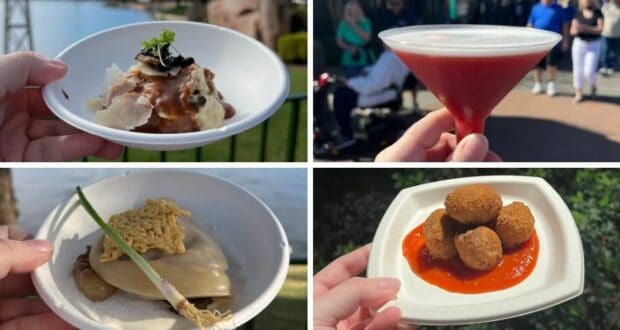 A Foodie Review of EPCOT Festival of the Arts

If there is one thing that EPCOT is known for, it is the number of incredible festivals that they host every year, including the International Food and Wine Festival, the Flower and Garden Festival, and the International Festival of the Arts. Right now, we are deep into Festival of the Arts, which honors all types of art, from visual to performance and culinary. What better way to spend the day than eating delicious food while watching amazing performances and purchasing beautiful paintings?

I recently visited the Most Magical Place on Earth and spent a lot of time eating my way around the world. There were so many delicious, beautiful, and intriguing dishes, it was impossible to try them all, but I did get to sample a number of them, and boy was it worth it.

This booth’s name is one hundred percent indicative of what they sell — deconstructed versions of popular food items. At this year’s Festival, there were three food options to choose from, and we tried one of each.

The deconstructed BLT consisted of crispy pork belly, brioche bread, tomato jam, and a soft-poached egg, all of which are served with a watercress espuma (the Spanish term for foam). Now, I love a BLT, but this was definitely outside the box. The pork belly was a little overcooked, and you needed a knife to cut it, while the brioche was a little dry. However, the tomato jam was absolutely delicious and the soft-poached egg was the addition we never knew we needed. Taking one bite of all the ingredients together resulted in something really yummy. 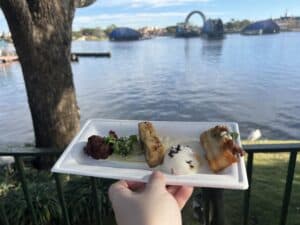 French Onion Soup is my absolute favorite soup, so I was very intrigued when I saw a deconstructed one on the menu. The Deconstructed French Onion Soup was made with beef broth ravioli, Gruyère espuma, onion bread pudding, and onion textures. Much like the deconstructed BLT, the French onion soup was better when you combined everything into one bite. However, I was quite impressed with the ravioli filled with beef broth. The onion textures were a little odd, but the scallion on top was a nice addition to give that extra onion hit. 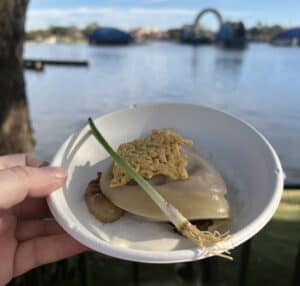 Again, Disney decided to deconstruct one of my favorite desserts, so I knew it was a must-try. The deconstructed Key Lime Pie was made with a flexible key lime curd, a key lime mousse, graham cracker cakes, and meringues. For me, the best part of the dessert was the flexible key lime curd and the meringues — I could have had a dozen of the light and crunchy treats. The raspberry was also a very nice touch, adding the right amount of tart to the sweet plate. 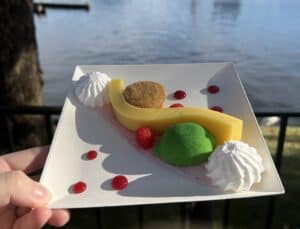 Located near the Germany pavilion, this booth offered some delicious dishes, including one that many Americans may not be familiar with. I tried all the dishes at this booth as well, and they were all good, and one was considered one of the top dishes of the festival.

Who doesn’t love a perfectly tender and juicy short rib? This was the dish that we thought came out on top for this booth. Served alongside the short rib was a parsnip purée, broccolini, baby tomatoes, and aged balsamic.  The parsnip purée looked like mashed potatoes, which made me want them, but the broccolini was cooked perfectly, and the short rib was fall-apart tender. A must-get for any short-rib fan. 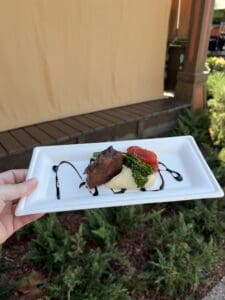 Now, I have to admit, this one I was a little apprehensive about, but I wanted to be a little more daring and try to expand my palate. And boy, am I glad I did. Boar has a very mild flavor and is very lean, so the boar sausage, was a little dry by itself, but when eaten with the beans and sauce, it was completely delicious. This was my favorite dish of the booth, and I wouldn’t be mad if they brought it back for next year’s festival. 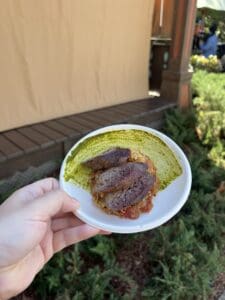 Reminiscent of the popular dessert Tiramisu, this was one rich dish. The cake was moist and the coffee in the buttercream was not too strong, with the sugar really balancing it out. The cake also had a deep chocolate ganache, which put it over the top. It was a delicious dish, but we couldn’t quite finish it all. If you are a chocolate and coffee lover, this dish is perfect for you! 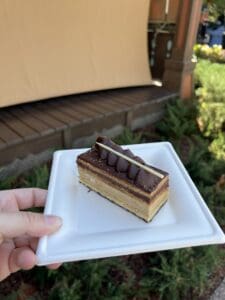 Disney’s Encanto was only released a few months ago, but it has taken the world by storm, so Disney decided to honor the Colombia-based film with its very own food booth. This food booth serves a potato and chorizo empanada, a spicy Ajiaco soup, and a Passion Fruit mousse with Dragon Fruit jam. My palate cannot handle spicy food all that well, but I am never one to turn down a delicious Empanada. 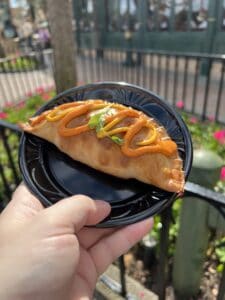 The house-made chorizo and potato empanada is served with a turmeric aioli and annatto aioli, which are the perfect compliments. I paired the empanada with their frozen piña colada (which wasn’t all that frozen) and it was incredible. The empanada is a little difficult to eat on the go, so I would recommend grabbing a fork when you pick it up. This is just one more delicious dish that Disney brought to the festival this year. 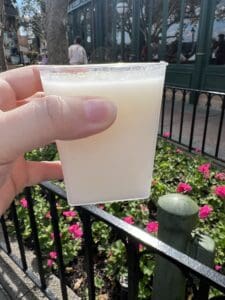 Located near the Canada pavilion, Gourmet Landscapes may have one of the most divisive dishes of the Festival — Bone Marrow. Well, I have never had bone marrow, so I figured what better time to try it. The Bone Marrow was served with onion marmalade, pickled mushroom, mache lettuce, and bone marrow snow. To be honest, there wasn’t a ton of bone marrow in the piece that we received, so those who love bone marrow may be a little disappointed, but overall, I was quite impressed with the dish and would absolutely order it again in a restaurant. 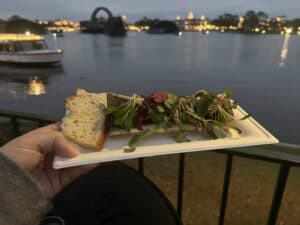 This was my favorite dish of the festival, so I had it more than once. Risotto can be tough to cook for a large crowd since it requires so much constant attention, but Disney just nailed it. The rice was perfectly cooked, rich and creamy, and served aged Parmesan, shaved Truffle, and a zinfandel reduction. The zinfandel reduction was the perfect addition to this dish and gave it such wonderful depth of flavor. If you are only at EPCOT for one day and are limited in the number of dishes you can try, this dish would be my number one recommendation. 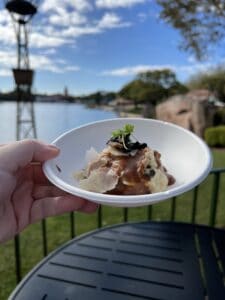 Chefs do France is my favorite restaurant to eat at when visiting EPCOT, so I was excited to try the country’s festival food booth.

This warm, creamy Brie was like a soup and served in a small bread bowl, but I wish it had been served in a regular bowl with a healthy serving of bread on the side. The creamy Brie was perfect for dipping, but it did require a spoon once the top of the bread bowl was eaten. If you didn’t eat a little of the Brie with a spoon, it may have gone everywhere and that would have been a waste! However, it was delicious, and any cheese lover is sure to enjoy it. 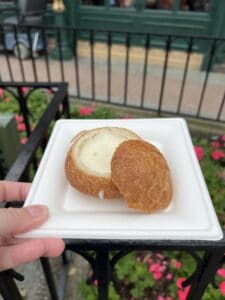 I cannot say enough good things about this absolutely delicious drink. The temperatures were low, and it rained some of the time we were at the Park, but that didn’t stop me from getting this more than once. While similar to the drink offered in Chefs De France, the Frozen French Martini is made with Grey Goose Vodka, Chambord Liqueur (blackberry liqueur), pineapple juice, grape juice, and orange juice. Those are blended with ice and served with a lemon-lime foam, which is just the icing on top of the cake. My favorite drink I have ever had at EPCOT (including the Grand Marnier slush). 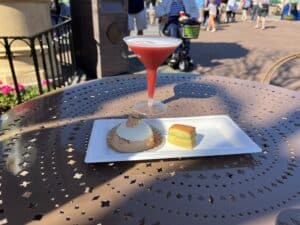 Let me say right upfront, I am not a seafood fan, so the other person in my group had this one all to herself. There were big chunks of lobster in the mousse and the presentation was as beautiful as the flavor. I did try the dill brioche that it was served with and I must say, it tasted like only brioche and the dill flavor was almost non-existent. I was told that lobster lovers will really enjoy this dish.

Italian is one of my favorite types of food, so I was excited to see some classic Italian dishes on this menu. Just like the deconstructed booth, we got one of each of these dishes and could have gotten one hundred more. Everything was just on point.

Arancini is one of my all-time favorite Italian dishes, so this was a must-try, and they were just little bites of heaven. The risotto balls were perfectly fried and stuffed with braised beef (but not a lot). It was served over a Pomodoro sauce that was the perfect compliment. There were 5 risotto balls in the serving, so it is great for sharing — although you may not want to (no judgment here)! 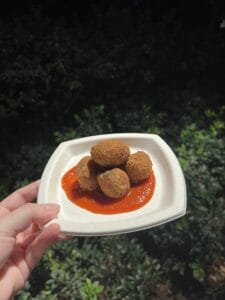 This was a sweet sausage ravioli that was served with mushrooms and onions in a creamy Parmesan sauce and the serving size was the ultimate bargain. Just a couple more ravioli and it would have been a full restaurant-sized serving. The ravioli were perfectly cooked and the seasoning was delicious — though if I were to have one criticism, it would be that it would have been nicer to have the mushrooms sliced instead of served whole. The Parmesan sauce was addictive and there was not a scrap leftover. 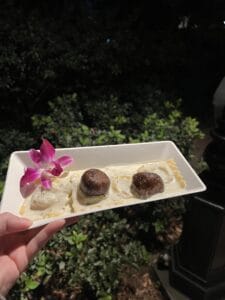 Bomboloni are adorable little fried Italian donuts that you could eat one or one hundred of. The description said that there was supposed to be a Nutella filling, but ours were served with regular cream, which did not make them any less scrumptious. They were also served with a green-colored powdered sugar, which was nice and not overwhelming. It was also served with a coffee dipping sauce, which was a really nice addition to the donuts. This booth just absolutely nailed it with everything they served. 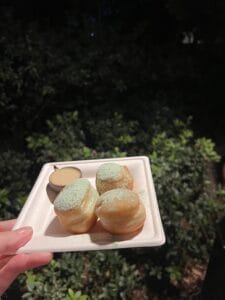 EPCOT International Festival of the Arts just really made incredible dishes, many of which I would have regularly when visiting if they were offered. If you have a chance to make it down to EPCOT during this year’s festival, be sure to bring your appetite!

Have you gone to the Festival of the Arts yet? What was your favorite dish?