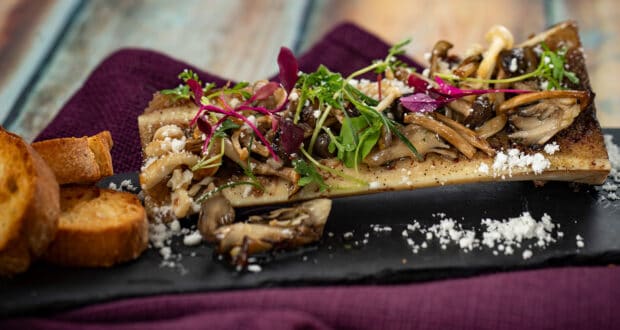 You read that correctly! You can order bone marrow as a dish at this year’s International Festival of the Arts at EPCOT. 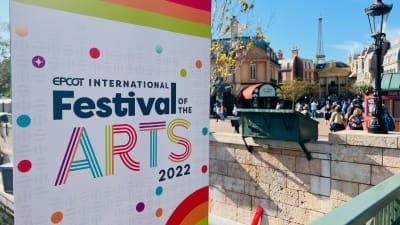 The 2022 version of EPCOT’s youngest festival has delivered big on surprises for Guests and Cast Members alike. We loved the surprise of a new Figment popcorn bucket only a few days before the festival opened, but the bigger surprise came on Opening Day of the festival. Who would have guessed that a popcorn bucket in the likeness of Figment with colorful rainbow popcorn inside would have Guests trading valuable park time for a spot in a 5- to 6-hour line just for the chance to purchase one of the lavender-colored containers?

Some new offerings and food booths are available this year, as well as returning participants in EPCOT’s annual festival that pays homage to the arts–musical arts, fine arts, and culinary arts.

There are 15 food booths at this year’s International Festival of the Arts, each one with its own signature dishes and beverages (and some with nothing but sweets). One booth, Vibrante & Vivido: Encanto Cocina, is inspired by Disney’s newest animated film, Encanto, and features cuisine and flavors inspired by the landscape and culture of Colombia. Its most popular food offering so far is the House-Made Chorizo and Potato Empanada with Turmeric Aïoli and Annatto Aïoli, which doubles as a Color Stroll Item on the festival’s Wonderful Walk of Colorful Cuisine! (Read more about the walk here.) 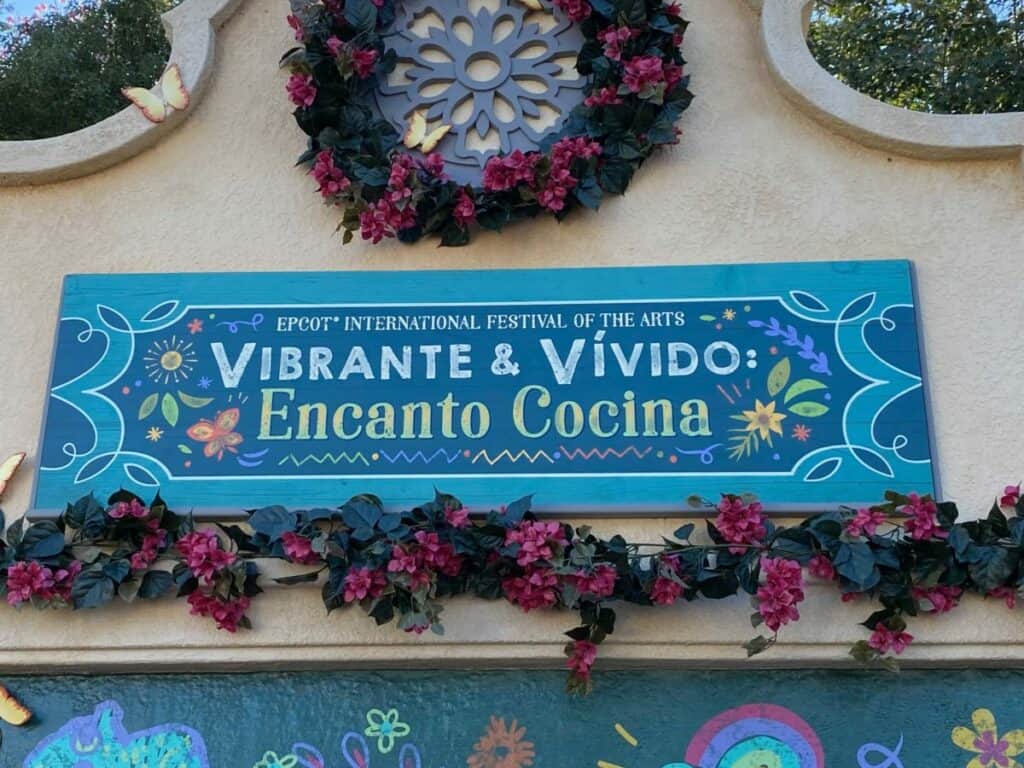 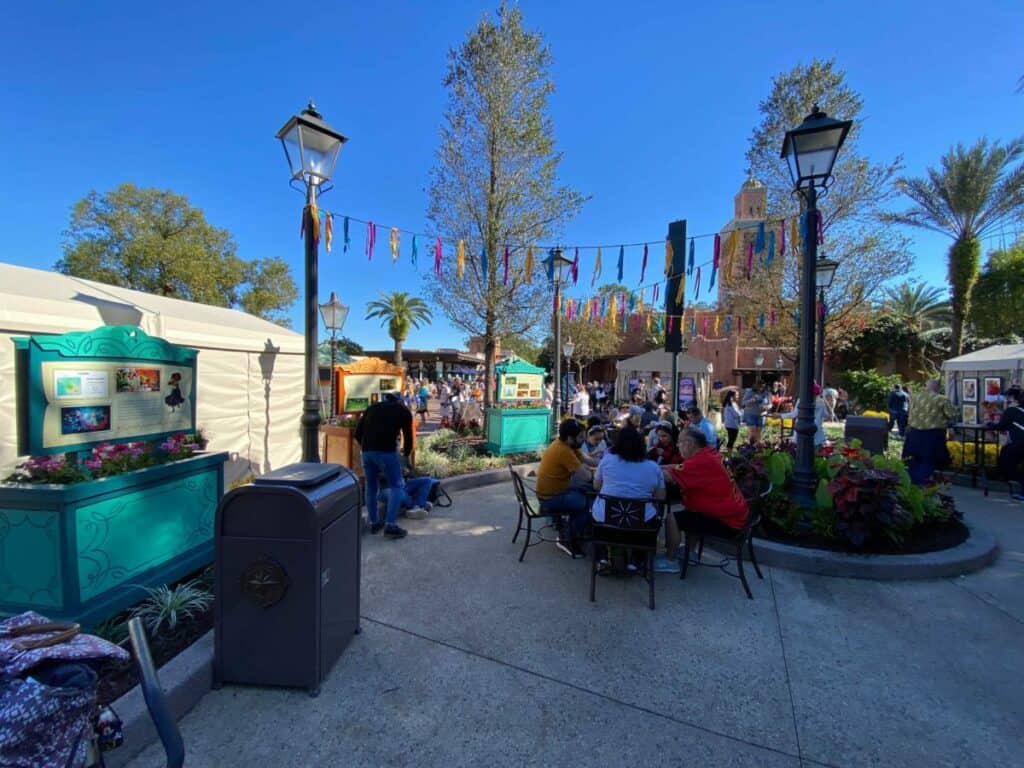 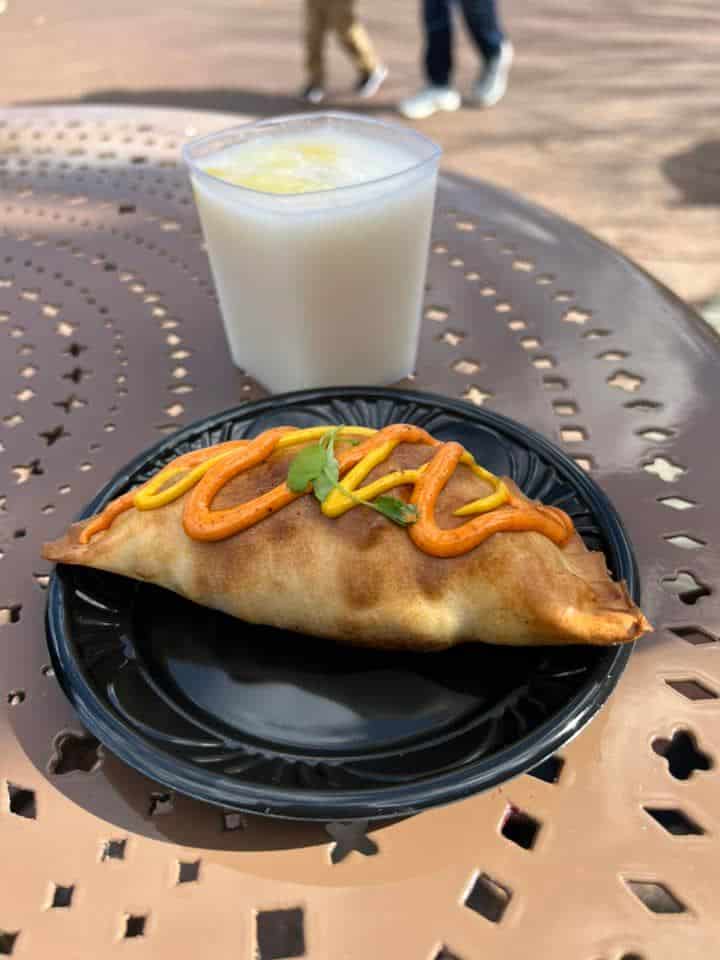 But another food item at this year’s festival has some of us scratching our heads and some of us singing its praises (and a couple of us feeling a lit uneasy), though it’s very popular among Guests who love this unique offering–some of whom have enjoyed it at a Walt Disney World restaurant. 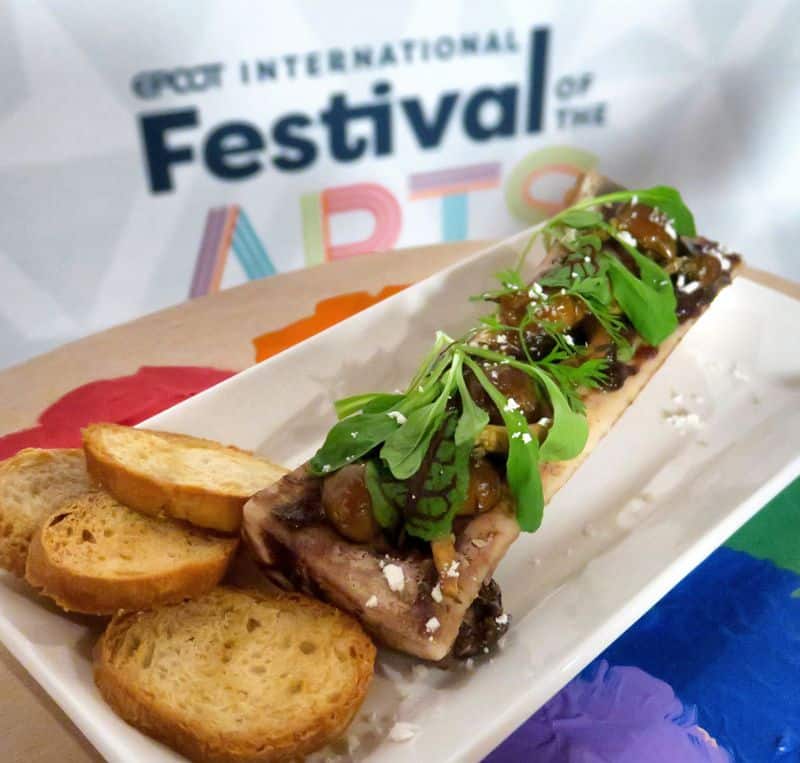 This dish is the Roasted Bone Marrow with Onion Marmalade, Pickled Mushrooms, Mache Lettuce, and Bone Marrow Snow available at Gourmet Landscapes at the Canada pavilion. The food booth prides itself on food items that are “stunning dishes artfully composed with the finest ingredients farmed and foraged from the land,” per Disney’s website.

Festival Chef Kevin Downing is excited about this year’s festival and about how the festival and its offerings have evolved.

“We’ve tried to elevate the offerings, push the boundaries a little,” Downing explained. “Give this event its own identity and figure out the culinary story we’re trying to tell.”

Each offering at the 15 food booths at this year’s International Festival of the Arts is offered with reason and purpose in mind. Not one offering is on the menu by happenstance. As if reflecting a part of the sentiment and theme of EPCOT’s World Showcase, the annual festival celebrates the arts, which means it celebrates the culture, traditions, and colorful cuisine that inspires art, and that is inspired by art. “The food in this case [in the Roasted Bone Marrow dish] is something you can consider part of the landscape,” says Downing. “Truffles and mushrooms and things you’d consider foraged, that have the look of coming right out of the forest ground.”

Chef Downing appreciates the opportunity to present foods at the festival that some Cast Members have never seen or worked with in the past, and that includes the Roasted Bone Marrow.

“I’d never have thought we’d see something like bone marrow on a festival menu out of a food studio,” he marvels. “That’s an item you’d find at a Disney signature restaurant.” 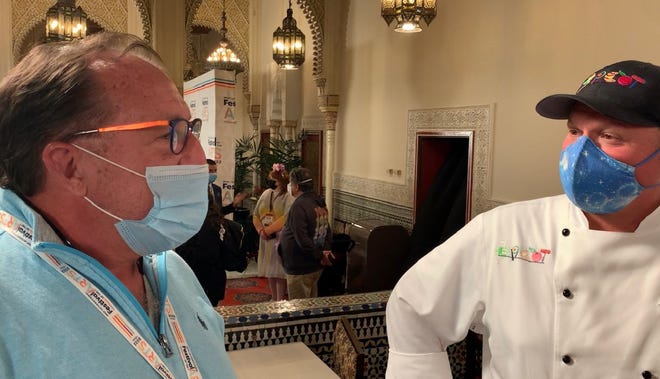 The Roasted Bone Marrow is one part of a trio of food items offered at Gourmet Landscapes. Guests can also sample the plant-based Blood Orange-Braised Beet Carpaccio with Mustard Vinaigrette, Pickled Clamshell Mushrooms, Golden Beets, and Crostini and the Wild Mushroom Risotto with Aged Parmesan, Truffle Shavings and Zinfandel Reduction.

Have you been to the Festival of the Arts this year to try the Roasted Bone Marrow? If so, give us your review of this savory selection!

2022-01-26
+Becky Burkett
Previous: How to Get the Disney World Dining Reservations You Want
Next: Lots of Disney World Guests are falling victim to this medical condition at the parks. Have you been a victim too?