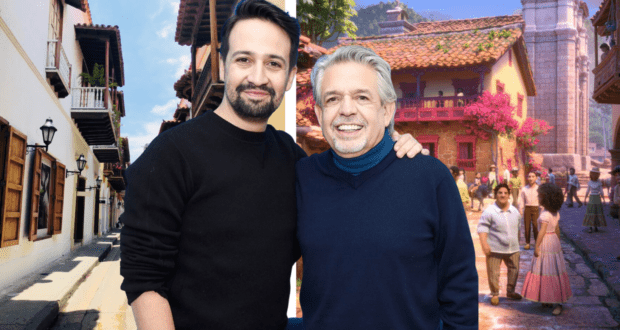 Maybe there’s a little enchantment in the number 60.

Disney’s Encanto is sweeping the nation. Walt Disney Animation‘s 60th animated film hit every mark with critics and Disney fans alike. The music from Encanto has the sure feel of Colombia, features styles like bambero, mapale, cumbia and joropo, and includes the sounds of unique instruments like the tiple, the tambora, the gaita, the arpa llerna, and the marimba de chorta, in addition to the staple of some Colombian music, the accordion.

(And the best part is you don’t have to know how to pronounce a single one of them to be able to get lost in the Colombian groove of “We Don’t Talk About Bruno.”)

On the surface, the story of Encanto from Walt Disney Animation Studios sounds a bit “Disney-fied” and thus, also a little hard to believe in, especially if you’re over the age of 7 or 8: a magical house, an extended family that lives together in said magical house, each one with a special magical gift that is used to help others (except, of course, for the only unspecial Madrigal, Mirabel, who never received a gift from a magic candle). Oh, yes, I almost forgot the magic candle. Unbelievable for sure.

But when you sit back and truly experience Disney’s newest animated film that has its roots firmly grounded in Colombian flavors and history, the magic of the culture, the traditions, the music, and even the amazing Madrigals are completely believable. And the truth about what actually makes the Madrigals amazing is not only believable but also a truth many want for their own families.

RELATED: Here’s how Disney’s “Encanto” breaks every Disney mold for storytelling so far

A film of this magnitude, however–this far-reaching, so full of a universal message that feels uber-personalized for each individual person right where they are in the theater or on their living room sofas–doesn’t just spring forth in its completed form from someone’s mind’s eye.

It starts with an idea that–just like the magic of casita and the special Encanto, or “place of enchantment” in the film–grows and grows into something more beautiful every day. And that growth was nurtured by the experiences gained and lessons learned by Encanto directors Byron Howard and Jared Bush, and Lin Manuel Miranda and his father Luis, when the quartet made the journey to Colombia in 2018 to gain inspiration and perspective for the animated film.

Lin Manuel Miranda was raised in New York City and says that having his father Luis, a native of Puerto Rico, along for the trip to Colombia was an invaluable experience.

RELATED: Artwork from Disney’s “Encanto” takes to the skies!

“I don’t know if my dad was invited by Disney or just sort of showed up on the trip; it still remains a mystery,” Miranda said of his father accompanying him on the trip with Byron Howard and Jared Bush. “But [my father’s] experience and what he brought to the table actually ended up being invaluable,” Miranda continued.

Miranda says that his father’s storytelling during the trip served as part of the inspiration for the character of Abuela Alma, the matriarch of the Madrigal family in Disney’s Encanto. 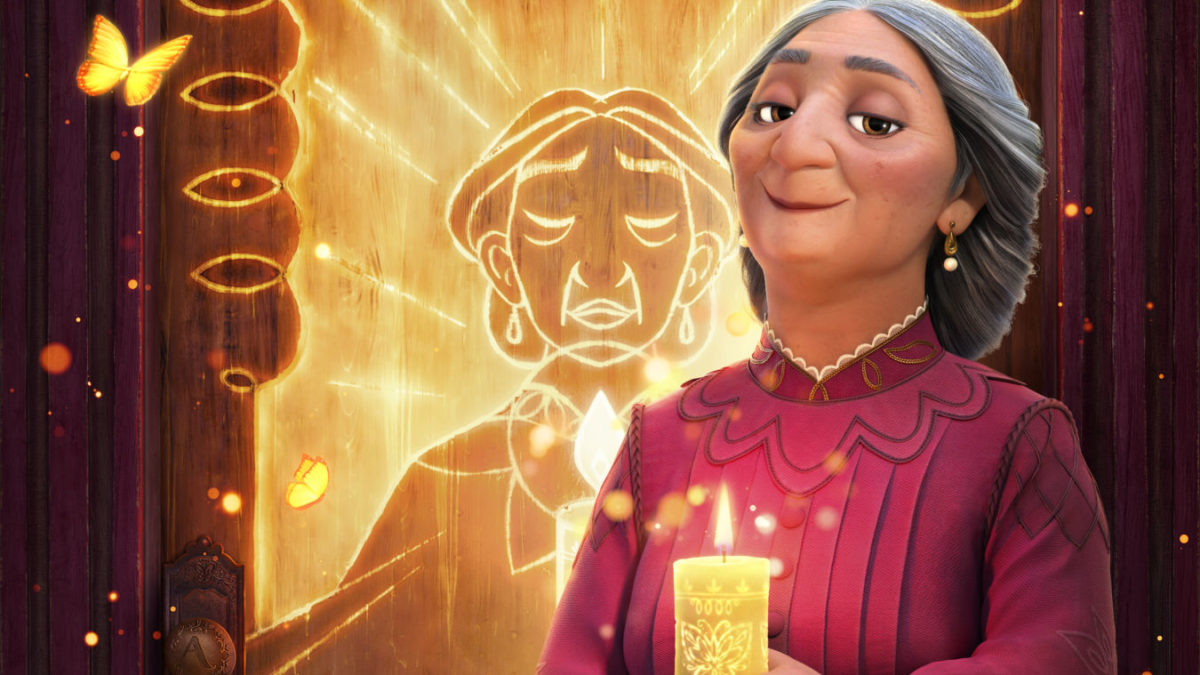 “I remember [my father Luis] telling us a story about his grandmother in Puerto Rico,” Miranda recalls. “She had lots of kids, and those kids married, and they all stayed under the same roof.”

Miranda says his father talked about his great-grandmother, describing her as one who “ruled with such certainty” that family members would hand over their paychecks to her. Then, he says, she would “reallocate the wealth amongst the kids and the married couples,” as well as amongst her children and grandchildren. 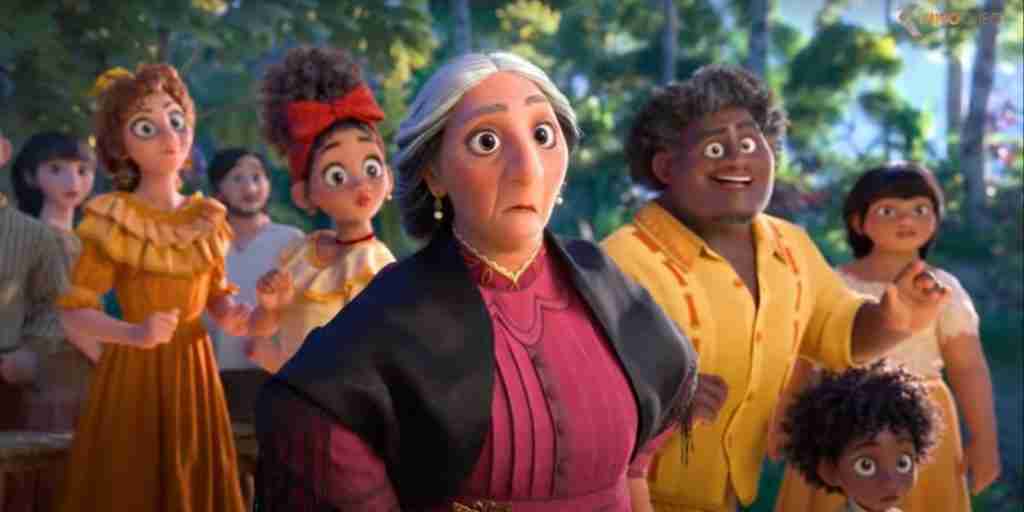 Conducting the research necessary for creating the story of Encanto, which involved celebrating the beauty, culture, and traditions of the Colombian people, as well as honoring their past, their struggles as a nation, and their progress, meant that a trip to the country was imperative.

According to Miranda and directors Byron Howard and Jared Bush, their visit to Columbia (along with Miranda’s father) allowed them to explore the country, to talk with many of the country’s residents, and to truly get a genuine feel and appreciation for the Latin American country that would serve as the setting and backdrop for Disney’s 60th animated film.

The trip would prove invaluable to the team of filmmakers who wanted desperately for Encanto to present Colombia truthfully and authentically in all aspects. Director Byron Howard said the entire trip was vitally important in helping them to make the film, and he says that having Miranda’s father on the trip was a great thing for them.

RELATED: Disney’s “Encanto” is on track to become the highest-grossing animated film of the year!

“It was incredible,” Howard said, “and I have to say, Lin has been with us on this journey from the very beginning, which is so rare to have your songwriter with you for this experience.”

“So, when we went to Colombia with Lin and his dad, Luis, who we love; [it] was an amazing experience,” he explained. “I think we were just blown away.”

Howard continued by explaining the ways in which the filmmaking team learned about the country of Colombia. 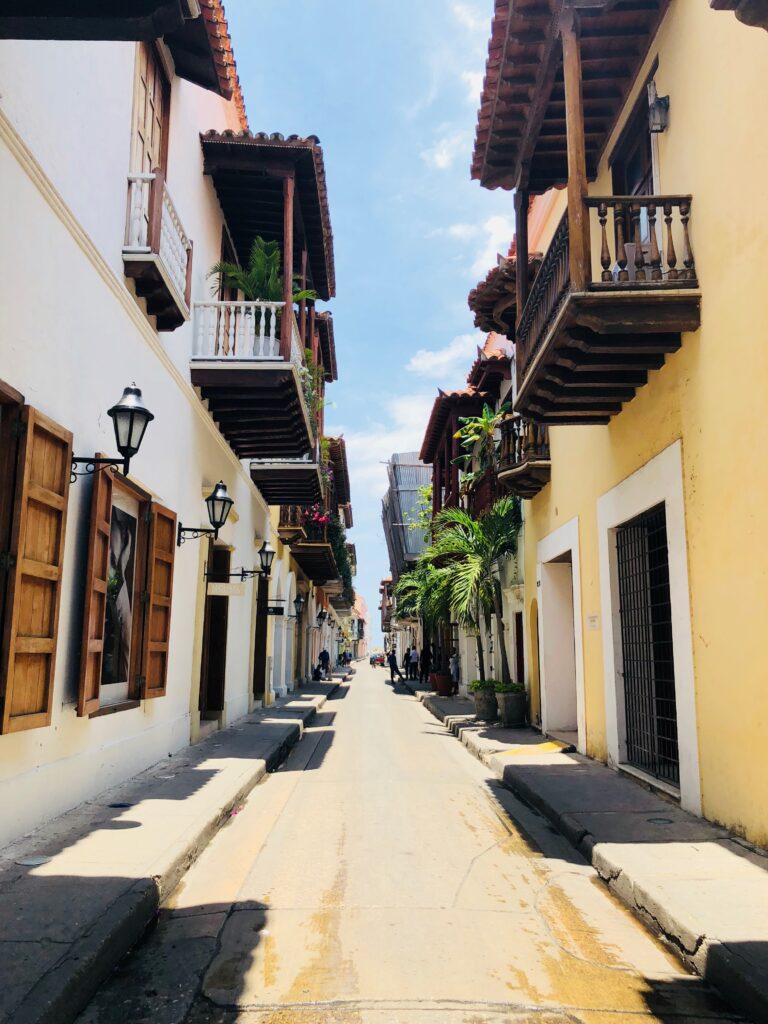 A photo from the trip of a street and housing in Columbia used in creating the locations in Encanto/Credit: Jared Bush and Disney Animation Studios

“I think we were learning about Colombia from people who we love, people who are of Colombian heritage, and were sharing their families, and that warmth, and just the diversity of families and music,” he explained. “And Columbia being this crossroads of culture, of dance, of food, of tradition, it just was an incredible moment for us. We were all over the place.”

Byron Howard says that the team visited big cities in Colombia, like Bogota and Cartagena, and small towns like Barichara, Salento-Salento, and Palenque. They also visited some of Colombia’s natural landmarks like the Cocora Valley. And each location exhibited a Colombian vibe all its own. 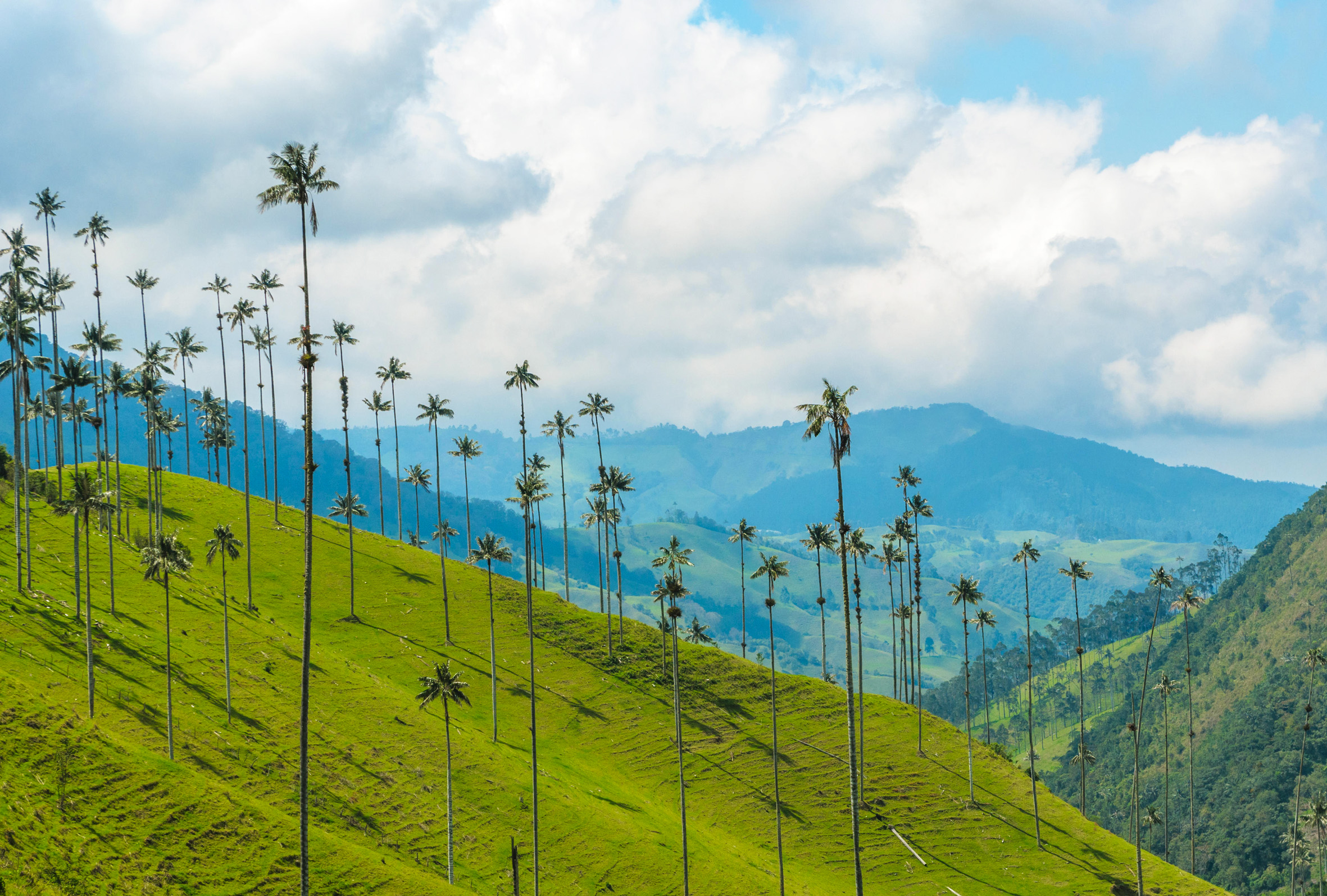 “We love that people from these different areas celebrate those specifics of their personalities,” he said. “And we looked in any way we could to try to get that into the family.”

Howard says that’s why characters in the story of Encanto each bring their own vibe to the Madrigal family. This is seen in the film as a Pasteno, Mauro Castillo, plays the voice of Felix (Pepita’s husband and Mirabel’s uncle by marriage). And Augustin, Julieta’s husband and Mirabel’s father, is a man from Bogota, Colombia. Howard says when making the film, they wanted to bring as much of Colombia into the Madrigal family as possible. The team chose to show a contrast between individual members of the Madrigal family, which lends itself beautifully to that end. “[Encantos] are all over Latin America, usually in areas of natural wonder,” Byron Howard explained further. “Our friends in Colombia told us that magic happens in these places and always has.”

But Howard says the magic that happens in Colombia doesn’t involve things like magic wands, potions, wizards, and the like. Rather, the magic experienced by the people of Colombia in these Encantos is tied to emotion and is an important part of Colombian tradition, called “magical realism.” 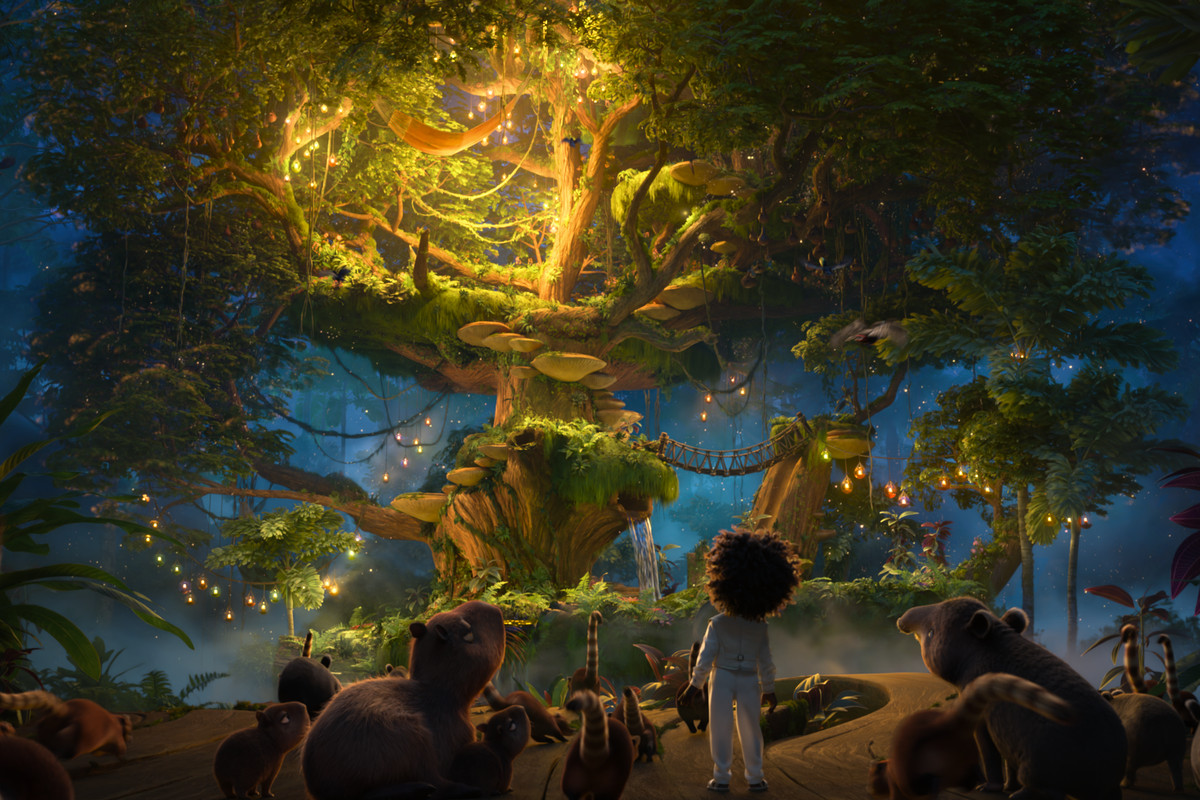 Director Jared Bush says that the team was able to experience the magic of Colombia for themselves, as well as some of the other amazing perks of Colombia, all of which themselves to the amazing final cut of a little project called Encanto.

“There is no shortage of good food or beautiful, warm and welcoming places,” Bush said.

We welcome you to see Encanto if you haven’t yet (or see it again if you’ve already watched it)! That “magical realism” does what it sounds like it does; it makes the magic very real indeed.