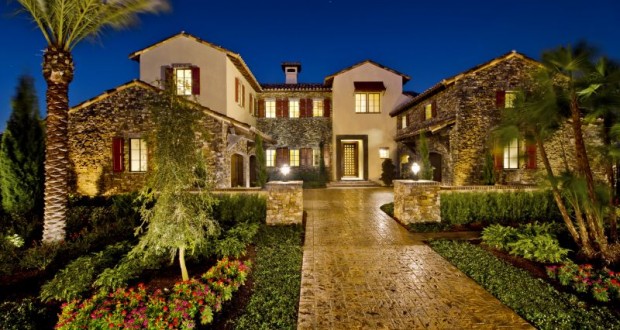 8 Things To Know About Golden Oak: A Dream Disney Neighborhood

The residential neighborhood of Golden Oak is situated just southeast of Walt Disney World’s Magic Kingdom.  The homes here were completed between 2010 and 2011, and the community was designed by Walt Disney Imagineering – it doesn’t get much better than that!  Living at Walt Disney World doesn’t come cheap, however.  Properties start at $2,000,000, and these multi-million dollar homes definitely target families who enjoy a certain level of prosperity.  The community features lovely architectural details, not to mention some impressive amenities and perks.  Plus, there are several lakes here – and a small river – so you can even find a lake-front home right in WDW!

We wouldn’t say no to any of the magnificent homes at Golden Oak.  But prospective buys have a choice of several different neighborhoods in this dream Disney community, each with different architecture and a different name.  Kimball Trace features gorgeous Tuscan architecture, while Marceline is named after the hometown of none other than Walt Disney himself, and boasts two parks. Carolwood contains the largest houses of any neighborhood in Golden Oak, and used to be part of a golf course; its name comes directly from Walt Disney’s private railroad.  Kingswell’s initial home sites feature homes on half-acre lots, with homes reaching 7,000 square feet.  Silverbrook’s homes are just as huge, from 5,000 – 7,000 square feet, while the whimsical Symphony Grove boasts smaller homes that were inspired by Walt’s animated short film classics “Silly Symphonies”.

While there’s no shortage of things to do at Golden Oaks, the simplest pleasure might just be the best!  Enjoy a relaxing stroll around the grounds of the neighborhood, where you’ll see lushly landscaped gardens and parks.  You can wander along the paths and picturesque footbridges between neighborhoods, chill out at a lake or water feature, or seek out sculptures of your favorite Disney characters.  There are classic Disney touches everywhere in Golden Oak!

The best way to end a magical day at Walt Disney World is, of course, by watching one of the fireworks shows at the theme parks.  All theme parks on site have evening shows that include fireworks, except for Walt Disney World’s Animal Kingdom (because the noise would disturb the animals).  While the best place to see the fireworks is of course within the parks, great views can also be had at nearby resorts.  And the great news about Golden Oak?  The evening fireworks at Disney’s Magic Kingdom can not only be heard from this dream neighborhood – they can also be seen, from every single home!  Just imagine ending every day with a Disney fireworks display!

All residents of Golden Oak have free access to the community’s private clubhouse, Summerhouse.  Designed to look like a Tuscan villa, Summerhouse is your headquarters for fun at Golden Oak!  There’s a heated pool that is beautifully lit at night, and a 24-hour fitness facility that includes an outdoor exercise lawn and a private training studio.  There’s also a games room where residents of all ages can play games, watch tv or just hang out with friends.  Summerhouse also hosts lots of community events throughout the year, and even has scents pumped in through the ventilation system – just like your favorite Disney resorts!

In addition to being close to all of the amazing dining options at Disney resorts and theme parks, Golden Oak has its own dining experiences right on site at Summerhouse.  Bolton’s is a great restaurant for relaxing over cocktails or sampling a culinary creation cooked in the wood oven.  Markham’s offers al fresco as well as indoor dining featuring local and sustainable cuisine, and Tyler’s is Summerhouse’s lounge, where you can cozy up to the bar and grab a bite or a specialty drink.

Summerhouse is also the home of Golden Oak’s Club Member Services, which means residents have access to Disney’s unparalleled customer service as part of their everyday lives.  Cast members at Club Member Services can truly make magic happen!  There’s a dizzying array of benefits, events, services and experiences available here.  You can book Disney park tickets, make dining, spa or golf reservations, arrange private transportation within WDW, and so much more. You can even create your own one-of-a-kind theme park experience, such as a New Year’s party at Epcot or a private evening at The Twilight Zone Tower of Terror.  The sky’s the limit!

Residents of Golden Oak have access to a diverse roster of special events held throughout the year within the neighborhood and at various spots around Walt Disney World.  There are holiday-themed meals and events, culinary demonstrations, social mixers, and beverage seminars and tastings.  You can enjoy guest speakers, book signings and presentations on a variety of subjects.  There are group fitness classes including spin classes, yoga and pilates, as well as various lessons and workshops.  Of course, there’s plenty of specialty programming for kids and teenagers, too!  One thing’s for sure: you’ll never be bored as a resident of Golden Oak!