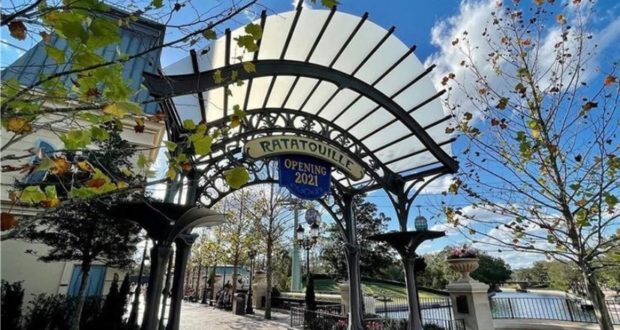 EPCOT stands for Experimental Prototype Community of Tomorrow. Many people look at EPCOT as the “educational park”, but just because there are many things that you can learn doesn’t mean it’s not fun. Walt Disney wanted it to be a living and working community. It may not look exactly like what Walt had pictured, but we think he would be proud to see what it became. Here are ten questions and answers that you may or may not know about EPCOT.

EPCOT is approximately 300 acres. It is a 1.2 mile walk around World Showcase alone. If you add Future World into the mix it is a three mile walk. EPCOT is twice the size of the Magic Kingdom. You definitely will not have a problem getting those steps in at EPCOT. Wear your sunscreen, because much of the park isn’t shaded.

8. Are There Any Good Thrill Rides at EPCOT?

This may not be the park for extreme roller coaster enthusiasts, but there are definitely some rides and attractions that will give you an adrenaline rush. Test Track is great for people who like to go fast but aren’t huge fans of the drops on roller coasters. If you are brave enough and don’t get motion sick, you’ll want to try out Mission Space. If you’re questioning if you can handle it you may want to try the Green Level first. It is much less intense than Orange.

7. Has It Always Been Called EPCOT?

Some of the Disney parks have seen name changes, and EPCOT would be one of them. When it opened in 1982 it was known as EPCOT Center. In 1994 the “Center” was dropped, and the spelling was changed to Epcot. In 2020 there was another change, although this time it was a minor one. The name returned to EPCOT (all caps) to fall in line with the park’s transformation. If you’re having a hard time typing all capitals, don’t worry. There are still spots on the Walt Disney World website that say Epcot.

6. How Tall Is The Eiffel Tower Replica in France?

As soon as you arrive in the parking lot you will see the giant “golf ball”. That is Spaceship Earth. The entire attraction is 15,520,000 pounds. Spaceship Earth is one of the most classic rides at Walt Disney World, it is great for all ages. Who said something educational can’t be fun? Spaceship Earth was scheduled to close for a lengthy refurbishment, but the plans were put on hold when Walt Disney World shut down in 2020.

4. Are There Any Good Full Service Dining Options?

There are lots of delicious and unique options available for dining at EPCOT. Coral Reef Restaurant is a one-of-a-kind dining experience where you are surrounded by a living coral reef. Garden Grill Restaurant is a must do if you love character dining. Le Cellier Steakhouse is a great option if you are looking for fine dining. There are too many full service restaurants to list them all, many of them are located in World Showcase. Disney is amazing when it comes to allergies and special dietary restrictions, so everyone will be able to find something that they will love. Make sure to get a reservation in advance to guarantee yourself a table. There are also plenty of quick service options if there are no reservations available.

3. How Much Did It Cost to Build EPCOT?

If you think about everything that goes into building a theme park, you will realize that it is not cheap. Remember as well that Disney will only create the best of the best. The total cost to complete EPCOT was between $800 million to $1.4 billion in 1982. Just pocket change, right? Disney will not release this information, so this is an estimate.

2. How Much Food and Wine Is Used for the Epcot International Food & Wine Festival?

There are four festivals held each year at EPCOT. One of the most popular is the EPCOT International Food & Wine Festival, which takes place each fall. The festival allows you to purchase food and drinks from all over the world, and there’s no need for an airplane ticket or passport. Ever wonder how much food and drink are used each year? More than 33,000 bottles of champagne and wine are opened. 1.2 million plates are served. For those who have a sweet tooth, 100,000 desserts are presented and served. Are you getting hungry just thinking about it?

1. Are There Any New Rides Coming to EPCOT?

Are there any “Guardians of the Galaxy” fans out there? If so, you will love Guardians of the Galaxy: Cosmic Rewind. The new roller coaster is being built where Universe of Energy used to be. It will be a family coaster so more people can enjoy it. A new family ride dedicated to “Ratatouille” will be opening soon. It will be called Remy’s Ratatouille Adventure. While it’s not a ride, a brand new firework show called Harmonious will be lighting up the sky in the future. These are all reasons to plan another trip if it’s been a while. Opening dates for Cosmic Rewind and Harmonious have not been announced. Remy’s Ratatouille Adventure will open on October 1, in honor of EPCOT’s and Walt Disney World’s Anniversary.