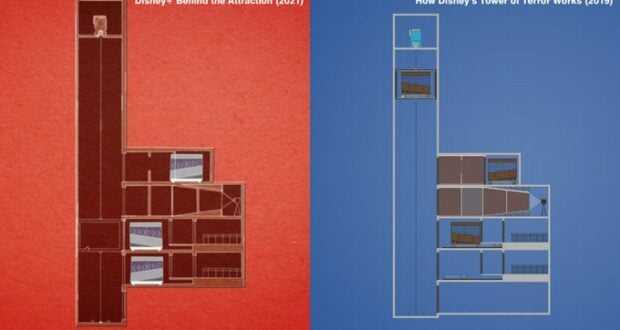 There’s a new series on Disney+ called Behind the Attraction. And it’s phenomenal.

The series is a five-course meal of Disney Parks history, Imagineering prowess, Disneyana and vintage videography and photography, served with childhood magic for dessert and a bubbly glass of Walt Disney. It is absolutely delicious, and I’ll have two plates, please and thank you. 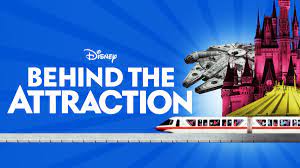 But this week, a YouTuber with a knack for engineering and an enthusiasm for theme parks has accused Disney of sampling some of his work in the new Disney+ series that specifically looks at the Tower of Terror attraction, but without permission or compensation.

St. Onge says he had already created his drawings of the inner workings of the Tower of Terror attraction–as long as two years ago. 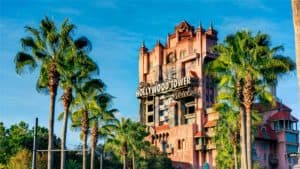 He says that he didn’t use any information from Disney, such as building plans, etc., to create his drawings, but that people kept telling him that Disney’s renderings looked eerily similar to his, so he had to take a look.

I did not reference any building plans when I produced my video. All the drawings are my own artistic representation of the attraction, so it would have to be quite a coincidence for every line to match up perfectly, right down to the individual stars in the 5th dimension. pic.twitter.com/OEKJe4T77V

When I first heard about Mr. St. Onge and his grievances against Disney for allegedly copying his renderings for use in the Behind the Attraction series, I could immediately hear comments in the back of my mind: things like, “‘Disney’ and ‘copying,’ a likely combo,” and “Hmm, Disney must have grown wearing of copying its own stuff and presenting it as new,” representing fans’ growing frustration over the entertainment giant’s greater draw (pardon that pun again) toward revisiting and “remaking” its classic over reaching toward fresh, newly-imagined content.

But in this scenario, if it’s true that drawings from the series are copied and not original artwork, that’s an infringement of copyright. If it’s true, it’s not a situation of Disney copying Disney. 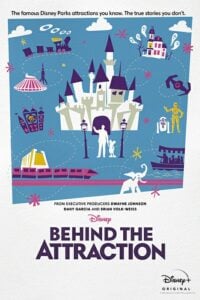 In one of his tweets, Mr. St. Onge says that though he feels the work is copied from his own, it was done so with less than precision. He says it’s “pathetic,” that he would expect it from a “kid on YouTube,” but not from a group working on a Disney production project.

Mr. St. Onge points out the inaccuracies of the series’ claims about the Tower of Terror attraction. For one thing, the series states that the ride has only one elevator shaft, when, in truth, there are three of them at Tower of Terror.

He also points out an error in the series’ script that proposes a design that isn’t only inaccurate; it’s also impossible in this particular attraction, according to St. Onge.

Normally I wouldn't be so nitpicky, but if you're going to produce a documentary for Disney just to copy someone else's work and still get it wrong, then that's kind of pathetic. I'd expect that from a kid on YouTube who doesn't know better, not a film company working for Disney.

When two artists are drawing something that already exists, you’d expect there to be lots of similarities in the drawing itself. After all, Tower of Terror looks like Tower of Terror.

But the suspicion comes in when St. Onge’s renderings are compared to those from the Behind the Attraction series, and you notice that it’s not the design similarities that are concerning; it’s the unique style in which they were drawn that is almost identical. 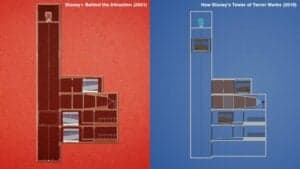 “The image on the left looks like it has been traced,” he immediately responded, “most likely in a vector art program, such as Adobe Illustrator and not in PhotoShop, as PhotoShop doesn’t do vectors.”

What are your thoughts? Do the images seem copied to you? Who do you think completed the renderings first–Disney or St. Onge?

2021-09-18
+Becky Burkett
Previous: JUST IN: Check out these perks for Guests staying at a Disney hotel as the 50th Anniversary Celebration kicks off!
Next: JUST IN: Showtimes for Animal Kingdom’s new ‘KiteTails’ show have been announced