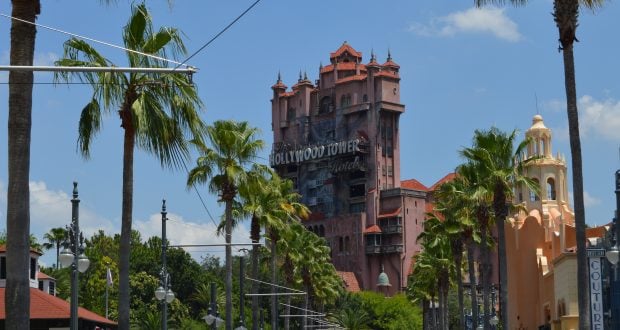 The Tower of Terror is one of the tallest rides at Walt Disney World, at 199 feet.  In fact, only Expedition Everest is taller, by half a foot!  The attraction is so tall that according to FAA regulations, it would need a red flashing beacon on it if it were just a foot taller.  Because of its height, you can actually see the back of Tower of Terror at Epcot’s Morocco Pavilion; it’s been decorated to make sure that it blends in with the architecture in the Moroccan Pavilion, but if you know what you’re looking for, it’s unmistakeable.

Part of the appeal of Tower of Terror is the perfectly creepy abandoned look the lobby has.  Everything in the lobby is dusty and covered in cobwebs, and it looks like the Tower Hotel has just been left to fall into disrepair.  But this is a carefully calculated look.  Disney Imagineers determined just how dusty and cobweb-y specific items and areas in the pre-show area should be, and cleaning staff have their work cut out for them following their instructions and making sure Tower of Terror is clean – but not TOO clean!

When you approach the Tower of Tower, listen for the lilting sounds of various 1930s songs, including “We’ll Meet Again” by Vera Lynn.  The music, which can even be heard beyond the garden walls, certainly sets the tone for the ride.  Guests will also hear songs by Glen Miller and Duke Ellington, among other 1930s favorites.  The soundtrack for the ride includes music featured in classic episodes of The Twilight Zone (if you can hear it beyond the screams from the elevators!).

Hidden Mickey hunters will have a blast at Tower of Terror.  Look for one on the antique lamp on the concierge desk in the lobby.  There’s another Hidden Mickey formed by the grating of the first boiler in the basement.  Watch for the doll the little girl holds in scenes throughout the attraction – it’s a Mickey doll from the 1930s.  Finally, in the library, look for a copy of sheet music of a real song from the 1930s, “No Mickey Mouse?  What Kind of Party is This?”

Guests with sharp eyes may recognize the effect used in Tower of Terror’s corridor ghost scene, as it is the same effect used to bring the waltzing ghosts to life in the ballroom in Haunted Masion.  It is called the Pepper’s ghost trick, an amusement park effect invented in the 1800s that involves images projected by a mirror onto glass, creating ghostly characters.

Surprisingly enough, during those death-defying drops that have you screaming in delicious terror, you are NOT freefalling.  Tower of Terror uses cables and massive motors to move the ride platforms up and down – at speeds that are greater than you’d achieve with gravity.  In other words, you’re plummeting at a faster speed than if you were freefalling – 39 miles per hour, to be exact!  To test this, you can put a penny in your palm during the ride, and watch it float above your hand when you drop.

In true Disney fashion, Imagineers creating Tower of Terror watched every single episode of the classic tv show The Twilight Zone to prepare an authentic experience for guests.  There are many nods to the show, include various props from specific episodes that appear throughout the ride.  There is actual footage (from the episode “It’s a Good Life”) with Rod Serling during the pre-show, and Serling says the opening lines from the show; but the rest of the pre-show video is narrated by an impersonator named Mark Silverman, who was picked by Imagineers and by Rod Serling’s widow.

Perhaps not surprising given the level of attention given to authenticity throughout the attraction, Disney spared no expense with the costumes for Tower of Terror’s cast members.  The costumes are modelled after 1930s-era bellhop costumes, and each uniform costs over $1000, making it the most expensive costume for any ride in Walt Disney World.

2017-05-23
Jason Dick
Previous: 10 Essential Experiences You Must Have At Walt Disney World
Next: Passholder Preview for Pandora – The World of Avatar