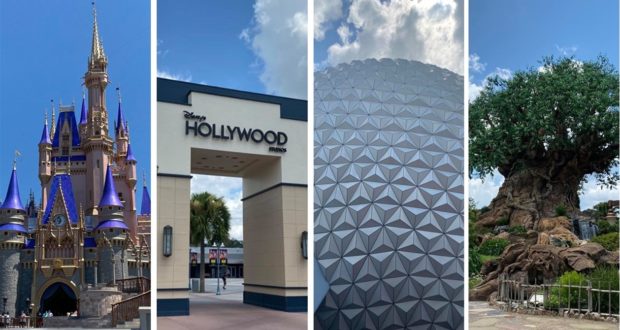 What To Know About Walt Disney World’s Modified Park Hopping

Disney fans rejoiced recently when it was announced that Park Hopping will soon return to Walt Disney World. Since the parks reopened back in July we have only been able to visit one park per day. That will soon change, allowing you to make the most of your day at Walt Disney World. Here is what you need to know about the modified version of Park Hopper, and a few questions that we have.

2. The Basics of the Modified Version

The first date that Park Hopping will return is January 1, 2021. That means if you’re visiting during the Holiday Season you will miss out. Here is how it will work. You will need a Disney Park Pass reservation for the first park that you plan to visit. You will also need to enter that park before you will be able to visit a different one.

Each afternoon at 2:00, the My Disney Experience App and DisneyWorld.com/ParkHours will be updated to tell you which parks are available for Park Hopping. The 2:00 time could change, but that is what is expected as the program is rolled out. There will still be capacity limits, so one or more parks may not be available. You will not need a second reservation, but if the park reaches capacity you will not be allowed to enter. This could change and reservations for the second park might eventually be required.

5. Star Wars: Rise of the Resistance

Those who choose to visit Disney’s Hollywood Studios for the second park will not be able to ride Star Wars: Rise of the Resistance. Right now there are two times each day when you can try for a spot in a Boarding Group. You need a Disney Park Pass Reservation in order to try when the first timeslot opens at 7:00 each morning. The second slot is at 2:00, and you need to be in the park. Since the information on Park Hopping will not be released until 2:00 each day, you won’t make it in time. This could change if Disney releases the Park Hopping availability earlier in the day, but as things stand right now only those who have a reservation for Disney’s Hollywood Studios will have a chance to ride.

Even though Disney has given us a lot of information on what to expect with the modified version of Park Hopper, there are still plenty of concerns that have not been addressed. It is possible that Disney is taking a wait-and-see approach, since we are living in unprecedented times. The Walt Disney World website does state that there could be modifications to the service once it has rolled out.

One of the main series of questions that we have about Park Hopping has to do with capacity. Walt Disney World has stated that there will still be capacity limits. How will people know if capacity has been reached? It will be disheartening to be on a bus from the Magic Kingdom to Disney’s Animal Kingdom, only to have capacity reached right as the bus enters the parking lot. If capacity is reached at 2:05, will more spots open as people leave? Will Disney increase capacity for the latter part of the day, assuming that some people will be gone?

Another question is about the first park of the day. Disney will allow people into a second park after 2:00, depending on the current capacity. What if someone with a Disney Park Pass reservation has not yet entered that park? Will that mean that they will lose their reservation? Many local Annual Passholders don’t stop by until later in the day. Hitting a park the evening that they arrive is also something that many guests love to do. If your flight isn’t until a bit later in the day and you can’t make it to the park until after 2:00, is your reservation no longer valid? Disney has yet to address this issue.

What if we visit our first park, head to a second, and then want to go back to the first? Is that going to be allowed, or will you lose your spot the moment you scan into a second park? Currently you can come and go as many times as you please, as long as you have a Disney Park Pass reservation. It is not clear if your reservation will remain in place after you leave.

8. Is the Four Park Challenge Possible?

Finally, many people wonder if they will be able to visit all four theme parks in one day. We don’t yet know if we will be able to use Park Hopper only for one extra park. The Four Park Challenge is something that many people like to attempt on their Walt Disney World vacations, and we don’t know if that will be possible under the modified version.

Even though Park Hopping will look different, we are excited that it is returning. We know that things might change as Walt Disney World tweaks the system to see what works and what doesn’t. Still, it’s one more step towards feeling “normal”. We look forward to seeing how the new version of Park Hopper works!