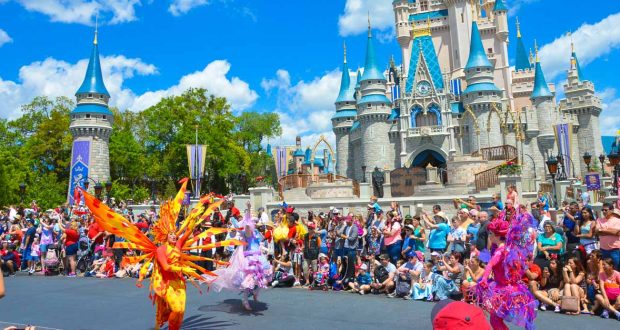 While thinking about the title of this article, I knew that there were different paths that I could take. I could write about the amount of Hidden Mickeys, the tunnels under the Magic Kingdom, or how to score as many points as possible on Buzz Lightyear. Instead, I decided to take a different spin. I’m a Florida resident, and I spend a lot of time in the parks. I decided to share here what I tell my out of town friends when they ask me for Disney secrets. I hope that my experiences and suggestions will help you to get more out of every second while you’re in the parks.

If you’re driving to a park, consider skipping the tram. This can be a huge time waster, especially at the beginning of the day when the trams are packed. The parking lots can be a little bit confusing, so write down where you parked and follow the others who are also skipping the tram. Once it’s time for bag check the lines are usually shorter on the outside than in the middle of the crowd. The same will often hold true at the turnstiles. People tend to get in line at the middle, so you’ll usually save time if you head to an end. Depending on the park and the time of year, you could save several minutes.

The Festival of Fantasy Parade is the best way to see as many characters as possible. While FastPass+ is available for reserved viewing, the spots go quickly. With only three advance selections available per day, you also might not want to use one for a parade. The crowd lines up early along Main Street, U.S.A. It is often much less crowded along Frontierland near the end of the parade. Send one person in your party to buy snacks for your group, and then enjoy them while you wait for the parade to begin. Don’t hold multiple spots for your family, that’s not fair to the guests who are waiting around you.

In a strange way, FastPass+ has made it easier to hit everything without waiting too long at Disney’s Hollywood Studios, but only if you arrive before the park opens. Both Toy Story Mania and Rock ‘n’ Roller Coaster are Tier One attractions. Make your FP+ reservation for one, and run to the other the moment that the park opens. There’s no longer a need to choose between starting the day with Aerosmith, or heading to Tower of Terror, because you should use another FastPass+ for the 13 story drop. (Tower of Terror is on Tier Two.) Your third selection is up to you. If you don’t ride Star Tours early, hold off until the end of the day. The line can be long midday, but it usually dies down a couple of hours before closing.

Some rides will break into two lines once you get close to boarding. If you can’t clearly see that one line is longer than the other, head to the left. Most people will choose the right line instead of the left one, probably because the majority of people are right handed. The left line might not always be shorter, but rarely is it longer. You may only save a minute or two, but every minute of your Disney vacation is important.

One of the biggest complaints about FastPass+ is that you can only get three a day. Many guests don’t know that it is possible to obtain a fourth FP+ on the day of your visit plus more. Book all three of your regular selections as early in the day as possible. Make sure that you use all three or let them time out. After your third ride is over go onto My Disney Experience app to make another selection. Cast Member’s can help you if you have any questions or problems. While it’s true that the best rides will be gone, you still should be able to find something fun to do. The fourth FastPass+ is especially nice at the Magic Kingdom, because there are so many selections. You can shoot for more after this but booking more than four in one day if you’d like… up until park closing!