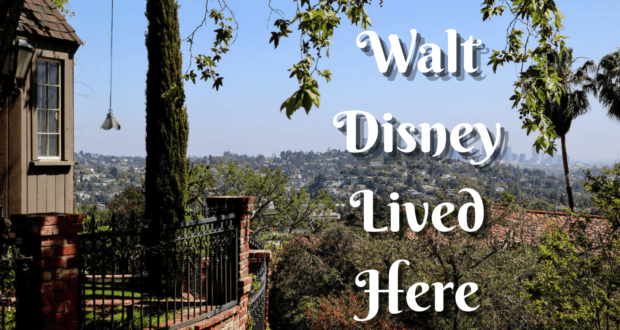 From the street, visitors to the area in Los Angeles only see a gate and a really steep driveway. But something very special sits upon a small area of land at the top of that driveway–a mansion that at first glance seems unassuming and not entirely different from other structures visitors see in the neighborhood on Woking Way, a tiny street that lies between Los Feliz Boulevard and Griffith Park. 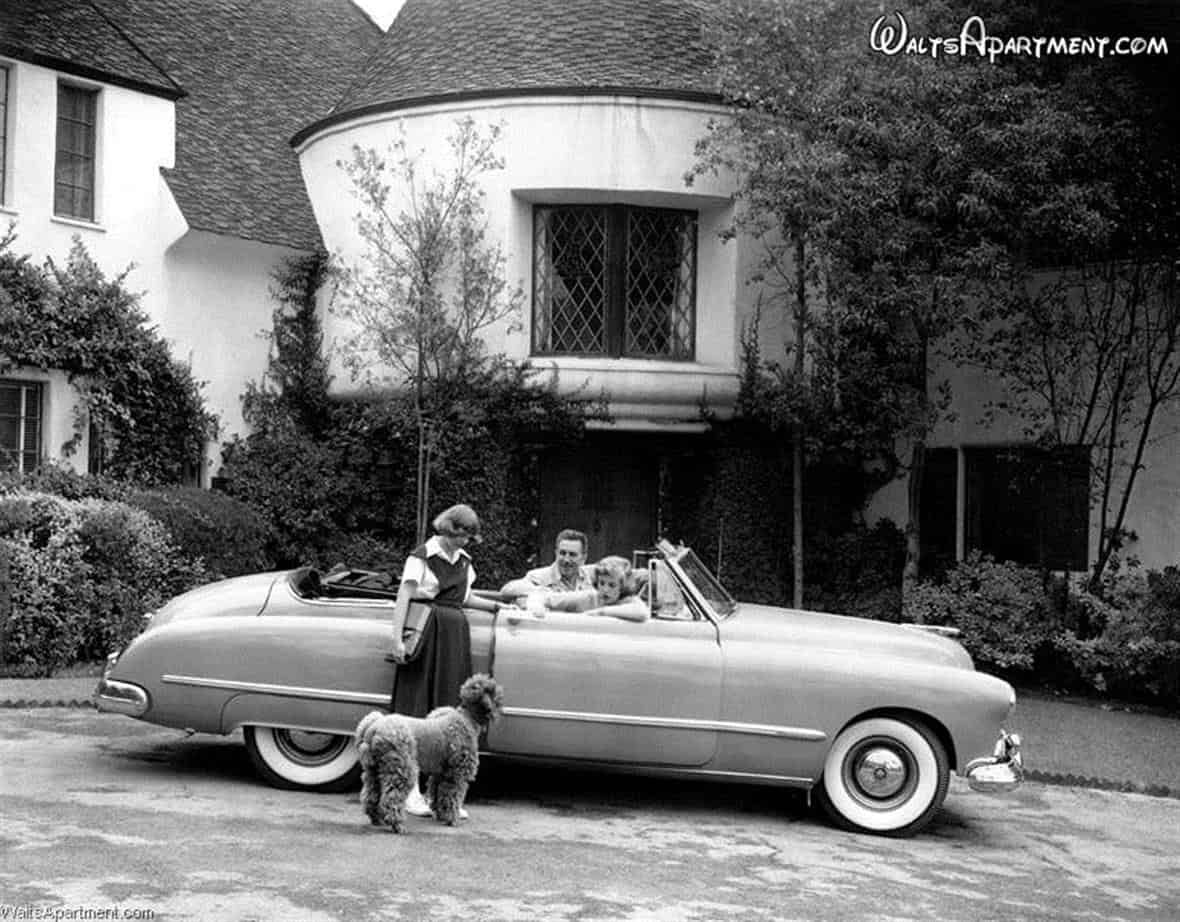 But atop that steep driveway is a place where real magic was born, real magic happened, and real magic was relived over and over again. It is, after all, Walt Disney’s Storybook mansion. 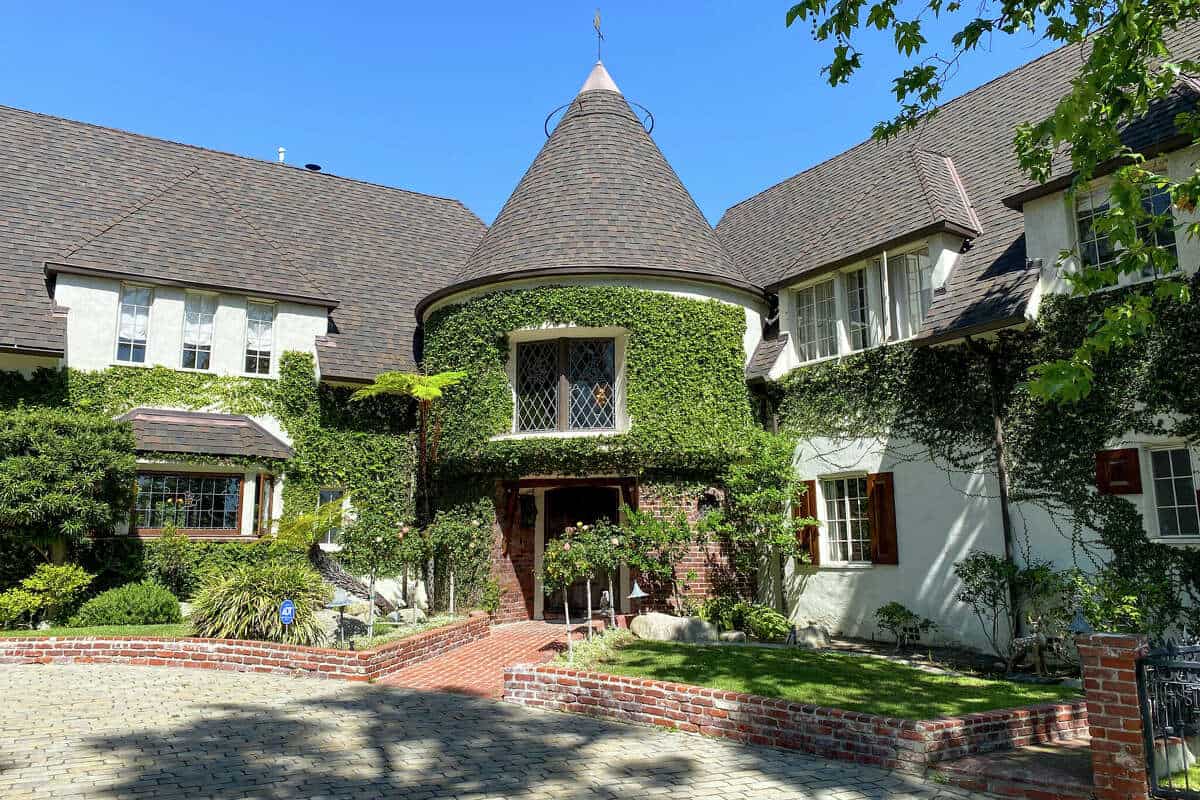 Known as Walt Disney’s “Storybook Mansion,” the home is a private residence that opens up for tours once a month. The home is one part luxury mansion, one part storybook cottage. And it’s 100% fairytale magic.

“There is something special about the house,” says Dusty Sage, who gives the once-a-month tours of the home formerly owned and lived in by Walt and his wife Lillian Disney. “I always like to think I’m feeling the spirit of Walt Disney when I’m in here. Whether that’s just me thinking that way or if it’s actually his spirit, I don’t know. But I get goosebumps in this house. No matter how many times I’m here, I feel the vibe of this place and it speaks to me.” 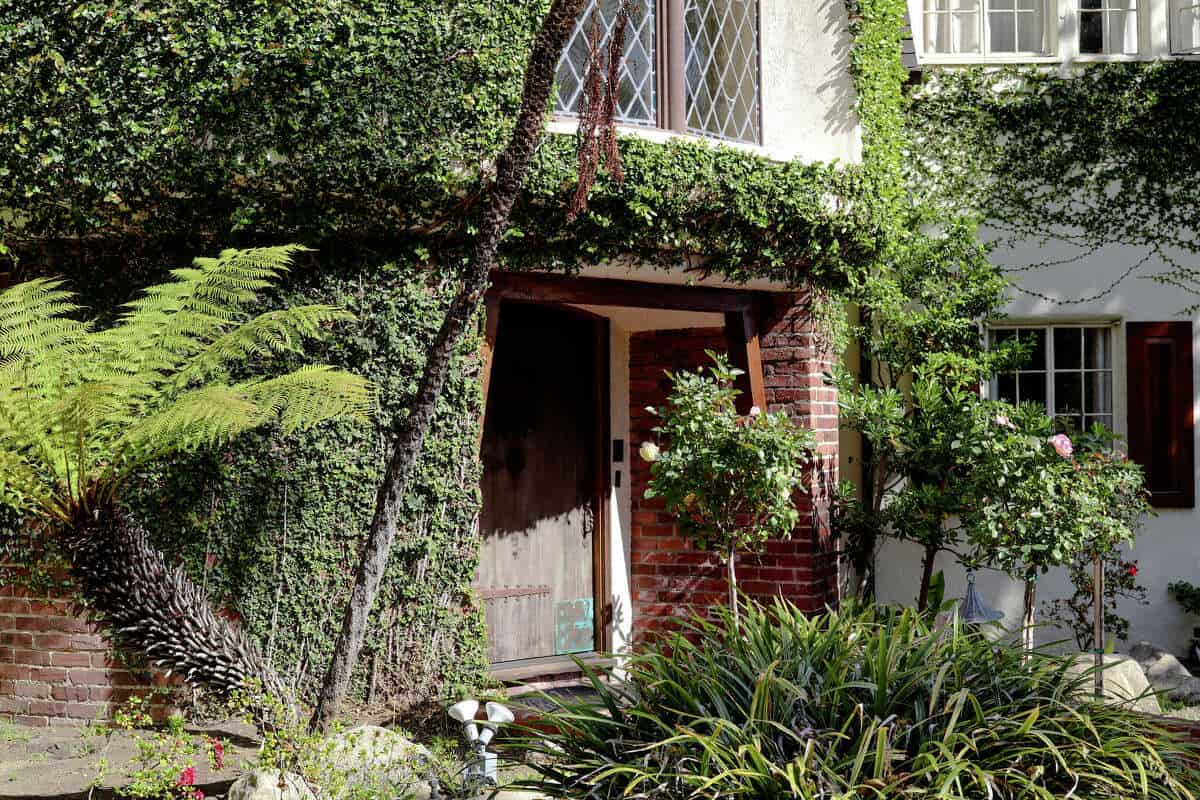 The mansion features white plaster and deep red brick. Dark wood shingles line the roof of the structure, and stained glass adorns the windows to the outside world. Within a tower topped with a classic weather vane lies the front door to the Storybook Mansion where Walt once lived, and if you’re ever lucky enough to tour the home, the walk up to the house will inspire you with rose bushes bearing two colors of roses lining both sides of the walk: yellow for Walt and pink for Lillian.

The year was 1932. Walt Disney hadn’t yet created and released what would be the first-ever feature-length animated film, Snow White and the Seven Dwarfs. The film wouldn’t debut at the Carthay Circle Theater for five more years. That year, Walt and Lillian had their new home built at 4053 Woking Way in Los Angeles.

Over the next 18 years, the Disney couple would welcome two daughters, Diane and Sharon, Walt Disney Studios would release Snow White and the Seven Dwarfs, Fantasia, Pinocchio, Dumbo, Bambi, Victory Through Air Power, Make Mine Music, Fun & Fancy-Free, Melody Time, The Adventures of Ichabod and Mr. Toad, and Cinderella, and Walt would begin plans for his first theme park, Disneyland, in Anaheim, California, some 32 miles southeast of his Storybook Mansion. The mansion encompasses more than 6,300 square feet and originally sat upon 1.5 acres of prime Los Angeles real estate. It’s not the same house in many respects as it has seen changes over 72 years that have passed since Walt and Lillian lived in it. 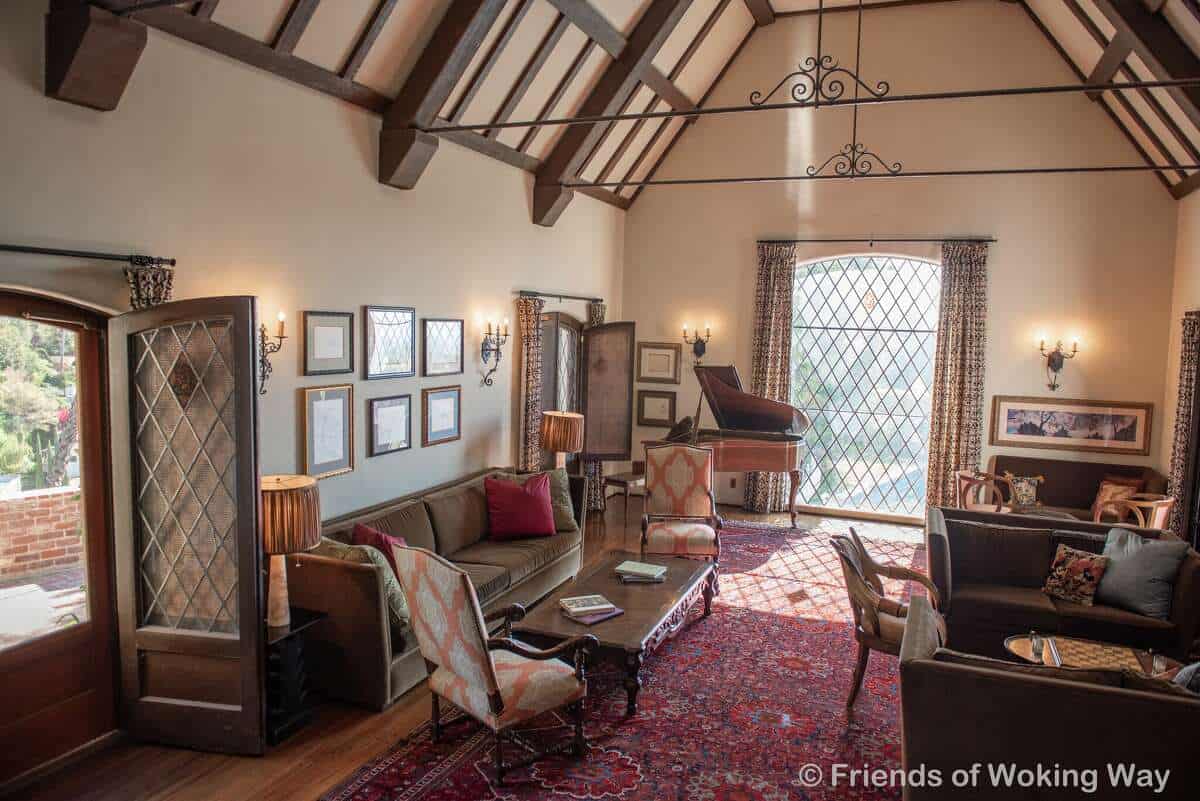 Part of the land on which the Disneys had their house built has been sold. The house has undergone some renovations and refurbishments as well. Walt’s workout room was first converted to a nursery and then to a billiards room.

While Walt and Lillian lived there, Walt had one of the bedrooms turned into a screening room. There, he could work with footage that was recently shot for the live-action projects on which Walt Disney Studios was working. 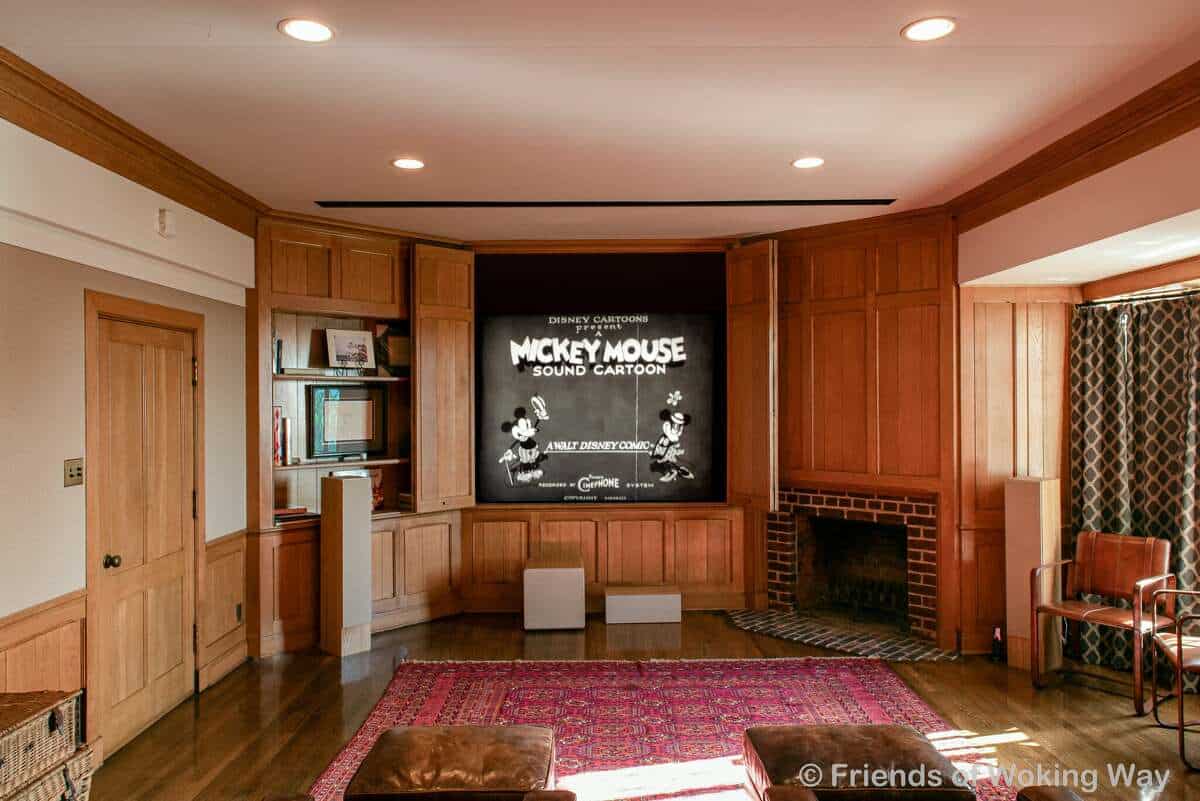 Just inside the mansion is a large rotunda, and the home still features the original colored-leaded glass. Other features inside Walt’s Storybook Mansion include painted vaulted ceiling beams, a “Juliet” balcony, a library, a sleeping porch, a breakfast nook, and two bars. There are also four bedrooms and five bathrooms. Just like Walt’s Carolwood estate, to which the family moved in 1950, the Storybook Mansion made beautiful use of plants native to California and rock terraces.

Upon the start of the Second World War, the country began to take strikes in supporting the effort, and Americans started to contribute metals to that end. Walt Disney himself donated two metal deer sculptures from his home on Woking Way.

This photo from the Los Angeles Times, dated August 14, 1942, shows Walt Disney with his sledgehammer as he prepares to break up the metal sculptures into pieces. 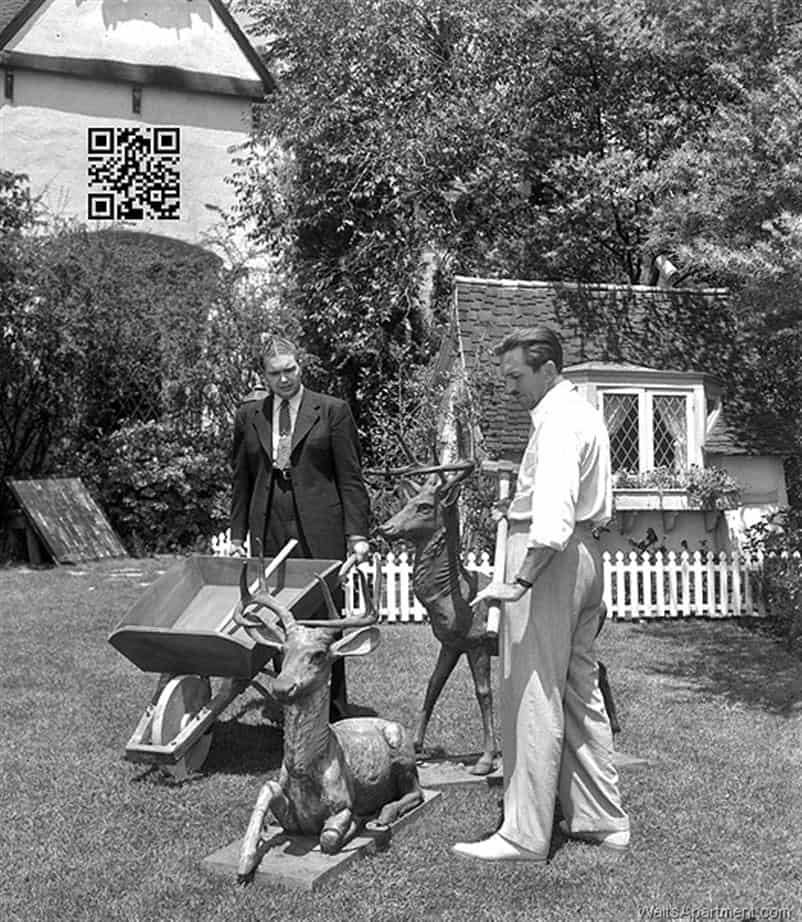 The home still has a little cottage where Walt’s daughters Diane and Sharon used to play outside. Since the Disneys moved, a swimming pool has been installed on the property, but the tiny cottage is still on the property as it was when Walt and Lillian lived on Woking Way. 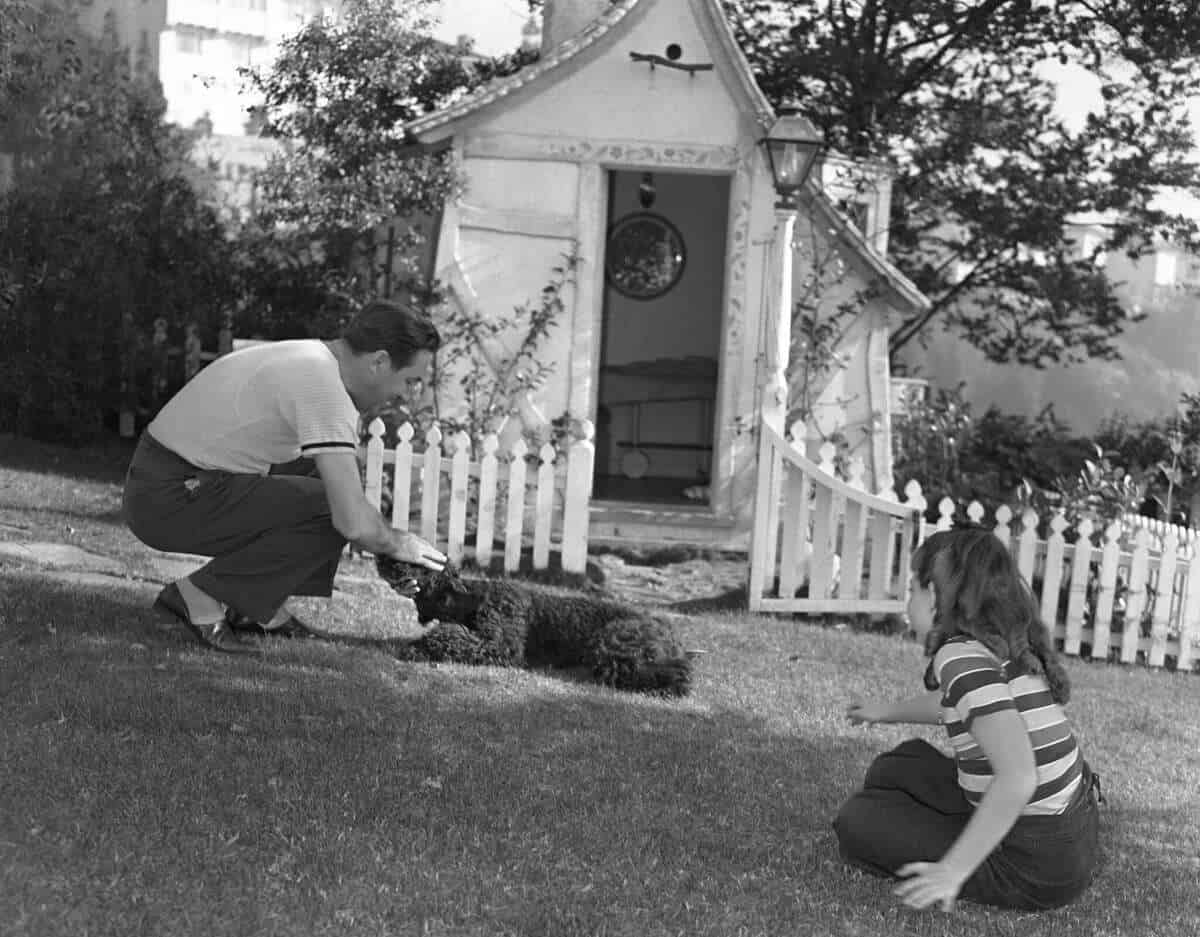 Walt Disney with his daughters and their play cottage/Credit: SFGate 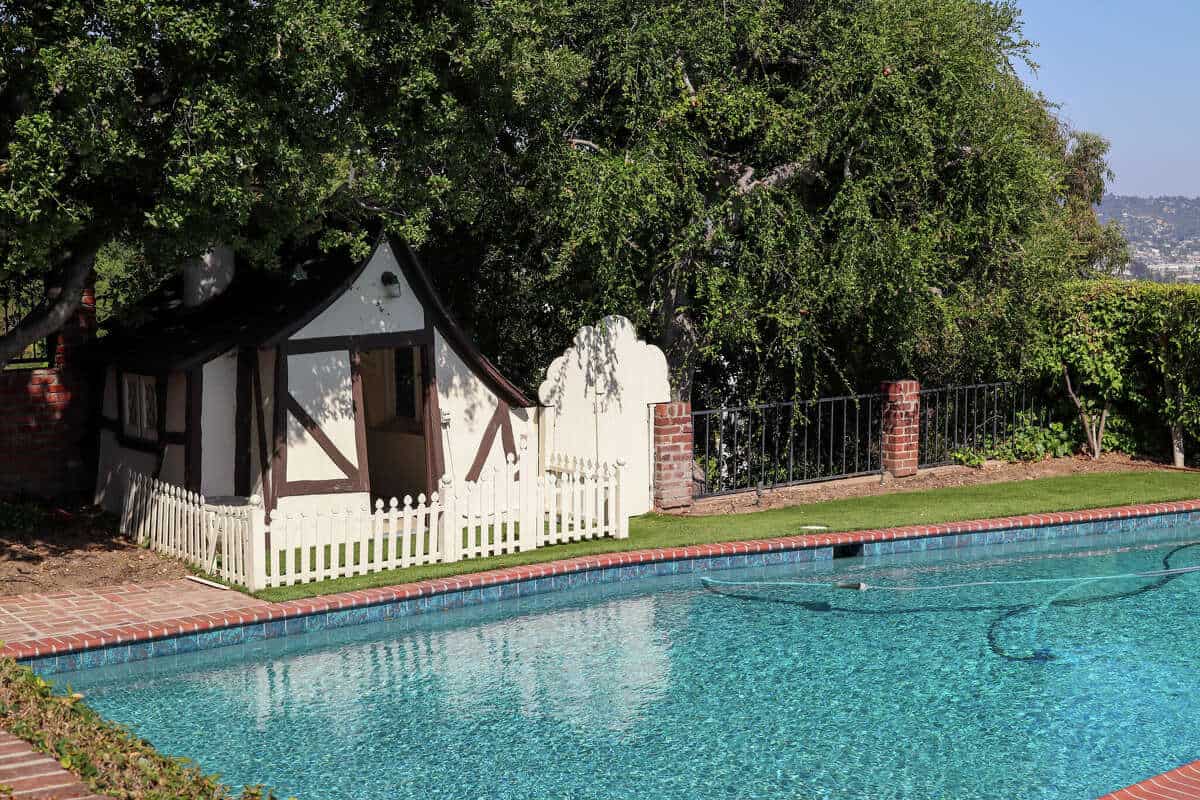 2022-05-23
+Becky Burkett
Previous: It’s not “Pirates” but Johnny Depp does appear in a “sequel” this week. He might even get a third installment
Next: Unique Entertainment & Delicious Food – Dining at The Edison