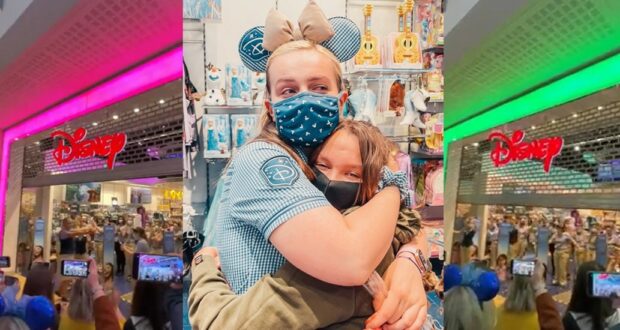 We previously shared the sad news that Disney has stated they will be closing 20% of their Disney Store locations before the end of the year to shift focus to online shopping. Consumer behavior with online shopping trend is one that seems to be the cause for the Disney Store closures as shopDisney is booming and new pop-up Disney merchandise are landing at Target locations around the globe. Even though we understand there is a bottom-line cost saving to the Disney Store closures, it’s hard to see physical stores go! There’s just something special about visiting a Disney Store… like having a slice of Disney close to home. Now, a video of one Disney Store location closing for its final time in a mall in Cardiff, Wales is going viral as the Cast Members say their goodbyes.

RELATED: The First-Ever Disney Store Is Closing After 34 Years

A Disney fan, @expeditiondisn1 took to Twitter to share the following video with: “Such a sad night at the Disney store Cardiff as it closed its shutters for the final time. #disney #shopdisney #disneystore #cardiff @shopDisney”.

RELATED: Is COVID to Blame for Disney Stores closing in North America?

In another tweet, @expeditiondisn1 shares the touching photo below with the note “Livvy has really made a friend with this fabulous Cast Member @elizaashford. She always makes time for her even when she’s busy in-store, it’s such a shame that the store has now closed and we won’t be able to pop in and visit her, but she’s always welcome for Mickey waffles.”

@expeditiondisn1 continues with: “I’m so proud of the way these guys worked their magic on the last day at the Disney store in Cardiff. It really makes you appreciate how amazing these people are. After all the hugs and tears they still managed to smile and make other people smile. #disney #disneyland #disneyworld”

Our hearts break for all the Disney shop Cast Members and Disney fans that have to say goodbye! If you’re curious to see if your local Disney Store is closing, you can check the store locator tool on shopDisney.com. Many of the store closure listings have a notation on when they will close for good. It seems like the vast majority of the shops have a closing date of September 15th, 2021. Thank you to @expeditiondisn1 for sharing the special moment on social media for all of us Disney fans!