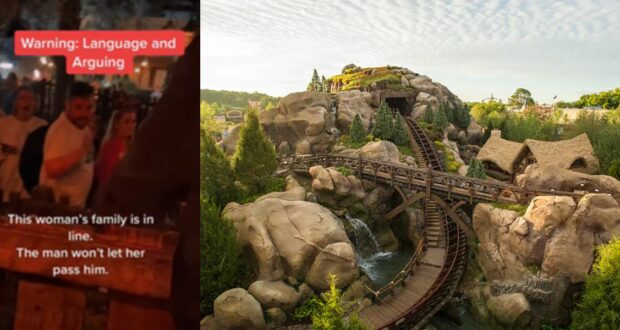 While we prefer to think of everything at Walt Disney World Resort being covered with magical pixie dust, the truth is, when that many people come together, incidents are bound to happen even in a Disney Park. A recent fight erupted at Magic Kingdom Park, leaving Disney fans to debate what the rule should be for holding spots in line.

From physical altercations to verbal fights, we’ve seemingly seen an uptick in the amount of hot-headed Disney Park Guests. Just this past summer, Magic Kingdom made national news as a massive brawl broke out between two parties of Park Guests as a person left an attraction line to retrieve her forgotten phone, then reentered, passing by others that felt she was skipping the line.

EPCOT has had its share of disruptive behavior, with a fight that occurred near the Living With the Land attraction, as well as a fight that broke out at Toy Story Land at Disney’s Hollywood Studios. But Walt Disney World Resort is not alone. We’ve also seen altercations unfold at Disneyland Resort despite it being “The Happiest Place on Earth.”

Guest behavior can be unpredictable… so much so that it wasn’t too long ago that Walt Disney World Resort issued a statement warning Guests to be courteous. Disneyland Resort followed suit and issued a statement soon after. While there are numerous reasons these fights have unfolded in the Disney Parks, many of them point back to potential line cutting while waiting for an attraction.

A new video captures a verbal fight that took place while Guests were in the notoriously long standby line for Seven Dwarfs Mine Train at Magic Kingdom Park.

As you’ll see in the video below (which contains some language), an individual attempted to reunite with her family after reportedly leaving the line to go to the restroom. She was stopped by a Park Guest that refused to let her pass. @themeparkettes took to TikTok to share the video, along with the message:

“Note: This is not my normal content. I try to share only helpful and fun theme park content and travel tips. But at every park I’ve been to, at least once a day, the question of “is it saving a spot or is it cutting?” comes up. Every so often, it leads to an argument. This one was louder than most. And because of where it was in line, could not have been handled by a Cast Member, so it was really up to the people in line, the “court of public opinion” to decide. But no one seemed to definitively know if it was against the rules or not. What do YOU think the rule should be?”

So, which side of the Disney debate are you on? Should the man have let the woman reunite with her family, or because she got out of line, should she be considered a line skipper? The comments on the video lean heavily in favor of the Guest attempting to reunite with her family. However, there are some that believe she is line-skipping.

Several comments point out that it really depends on how many people are joining the family that is waiting, such as the note, “1 or 2 people I don’t mind. But I have seen it where it looked like one person and then ended up being a family of 6.” Others show support with statements like, “Ugh people need to chill.”

Some comments lean in favor of the current Guests in line with, “here’s an idea…go to the bathroom before you enter a line?!” and “Only if the person coming back to their spot in line is on their period, if not….you gotta wait like everyone else.”

A self-proclaimed Disney Cast Member adds the best advice, however, noting, “CM here, people do get verbally harassed or physically assaulted over trying to reunite with their parties, so it’s best to talk to a CM while trying.”

Involving a Cast Member is the way to go! Alas, it seems like this debate of holding spots versus line-cutting continues to be a hot topic for Disney fans.