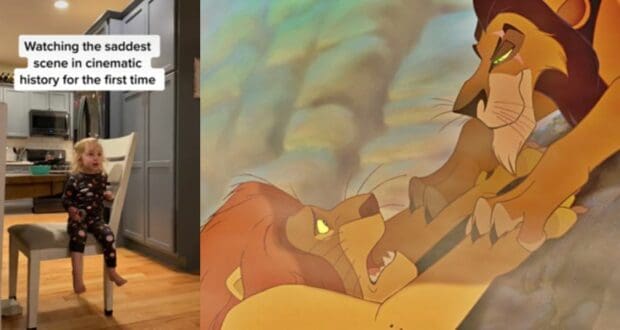 Disney movies have a way of playing on all sorts of emotions! From the moment Snow White awakes to true love’s kiss in Snow White and the Seven Dwarfs (1938) to the devasting loss of Carl’s beloved wife, Ellie, in Up (2009)… having tissues handy while watching Disney films is a must.

But what would you say is the saddest scene in Disney’s cinematic history? Yes, there are several. Immediately, however, our minds go to an iconic scene in Disney’s The Lion King (1994). The moment when Scar throws his brother Mufasa off the cliff and into a wildebeest stampede.

King Mufasa, the lion pride’s leader, dies from the fall and stampede. His son, young Simba, nudges Mufasa… trying to wake his father. Scar blames Simba, and the poor young lion runs off with plans to never return home.

What a traumatizing scene when you really think about it! It hurts the heart, for sure. So, what is an almost 3-year-old’s reaction to seeing The Lion King scene for the first time? One mother captured the moment.

@kristinsanford took to social media to share the now-viral video of her child “watching the saddest scene in cinematic history for the first time.” She notes, “One of the hardest mom moments I’ve ever had to go through.” Check out the video below:

Rory, the almost three-year-old in the video, is so sweet and innocent in her comments and reactions. No wonder this viral video has surmounted almost 19 million views on TikTok. You can see the sweet heartbreak as the scene unfolds.

The mother follows up the video with a little introduction of Rory, “the star of The Lion King reaction,” as shown in the video below:

Stay sweet, Rory! We hope she was able to watch the Disney movie all the way through to see Simba’s grand return to the Pride, and to sing a little “Hakuna Matata” to cheer her up.