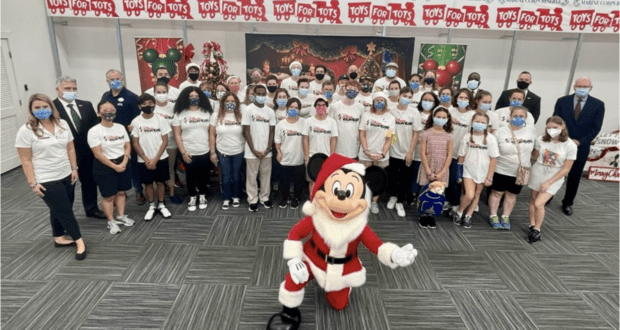 Every holiday season, Guests visiting Disneyland Resort, Walt Disney World, Tokyo Disney, or even taking a Disney Cruise will see familiar white boxes with a red train logo. Those boxes mean that Disney is once again participating in the Toys for Tots toy drive, something they have been doing since the days of Walt Disney himself. Walt was very close with the former Major who founded Toys for Tots and even designed the now familiar red train logo the charity uses. 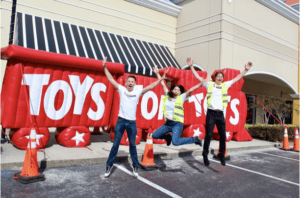 Toys for Tots is one of the biggest charities that Disney is involved with, and the charity not only receives thousands of donations from Guests, but Cast Members also donate toys as well as their time to help sort and hand out toys. This year, as in years past, Disney Cast Members also participated in the Ultimate Toy Drive, where they raised thousands of toys to help those less fortunate this holiday season, with 10,000 toys going to children in the Orlando area alone. The Walt Disney Company also kicked off the toy drive with a $500,000 donation to Toys for Tots. 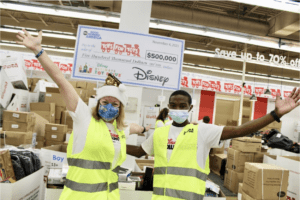 President and CEO of Toys for Tots, retired Lieutenant General Jim Laster, gave a small speech while he was there and said:

“Disney has been our foundation’s longest and most loyal supporter for more than 70 years. Our foundation is built upon the dream of one Marine to make a difference for families in need during the holidays and the unwavering support we received from legends like Walt Disney and the company he founded.” 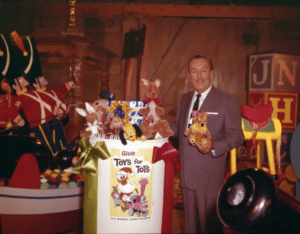 Here is more information from Disney Parks Blog on the special visit and how Cast Members came together to help those in need.

Walt Disney World Resort has supported the 2021 drive in many ways including in-person donation drop-boxes at Disney Springs, in backstage locations and at special cast events throughout the entirety of the drive. Hundreds of Disney VoluntEARS also helped by taking shifts to sort & distribute the donated toys at local Toys for Tots warehouses for the past several weeks, collectively volunteering more than 2,000 hours.

Many of the VoluntEARS working during the Toys for Tots Foundation leadership visit were members of Disney”s SALUTE Veteran affinity group.

“It was a great day, supporting Toys for Tots and helping make this time of year special for everyone in our Central Florida community,” said Lisa Arney, Senior Manager with Disney Signature Experiences Communications and veteran of the U.S. Army Reserves. “I’m glad I could share this experience with my daughters who could see the benefits of volunteering and its positive impact of on our community first hand.” 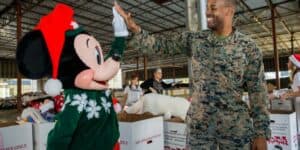 You can also watch a video of the event below.

While the Toys for Tots drive has ended at Disney locations, there may still be time for you to donate a new, unwrapped toy if you would like. You can visit the Toys for Tots website to find drop-off locations in your area and see what locations are still accepting donations. There is even a virtual toy box on the website, and you can donate a toy that way as well.

2021-12-21
Krysten Swensen
Previous: VIDEO Interview: What’s Next for Bob Iger After 47 Years with Disney
Next: Here’s Why You NEED to Try Flame Tree Barbecue at Animal Kingdom