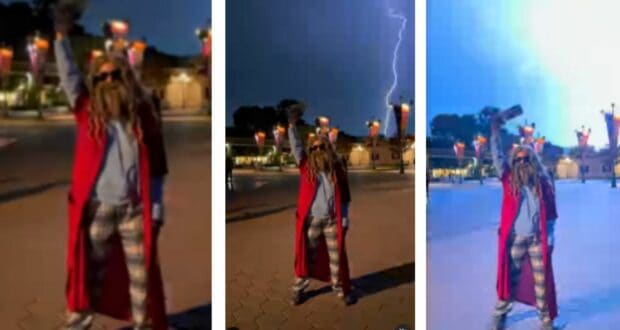 Thor goes viral: Guest at Disney Park goes as ‘Thor’, brings the hammer AND the lightning

“Whosoever holds this hammer, if he be worthy, shall possess the power of Thor.”-Odin

After seeing a new video on Instagram, we’re thinking that if Odin’s statement is true, then Thor might just owe a Disneyland Guest his beloved hammer. Here’s why.

It’s still more than a month until Halloween, but the spooky celebrations start early at Disneyland Resort in California, where every year, barring any COVID-19 issues or closures, thousands of Guests dress up as their favorite Disney, Marvel, Star Wars or PIXAR personas, grab their smartphones and cameras and head to the park for the Oogie Boogie Bash. 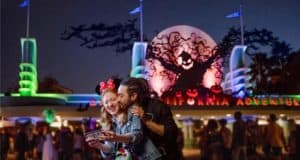 Some Guests wear costumes that merely nod to their favorite characters, and others go all out, like a Guest named Kelly Wilson, who visited Disneyland and attended the Oogie Boogie Bash with her sister just recently.

Kelly went all out for her costume, dressing as “Fat Thor” from Marvel’s Avengers: Endgame. ALL. OUT.

Kelly sported the plaid pants, the bathrobe, the long beard, the unkempt appearance. And she was sure to bring Mjolnir, Thor’s hammer.

But she couldn’t have been prepared for the power that hammer would hold once she got to the Oogie Boogie Bash! Her sister was taking photos of Kelly swirling her version of Mjolnir above her head when suddenly, a streak of lightning tore through the California night sky. 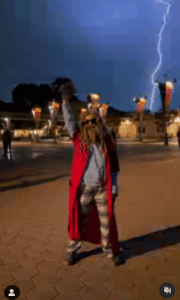 The spectacle was reminiscent of a scene in Avengers: Endgame–lightning and all! Just look at this shot of the lightning behind Kelly. 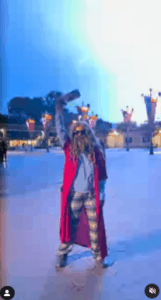 Let’s look at that again! 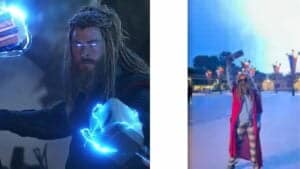 Per her Instagram post, Kelly’s sister @debbiewilsonn says the two didn’t realize there was lightning in the area until they were leaving the park. They both thought the “lightning” was part of Disney’s special effects for the Oogie Boogie Bash.

Yes, it might just be time for Thor to hand over Mjolnir; we think Kelly has earned it; she’s clearly got a knack for wielding its power!