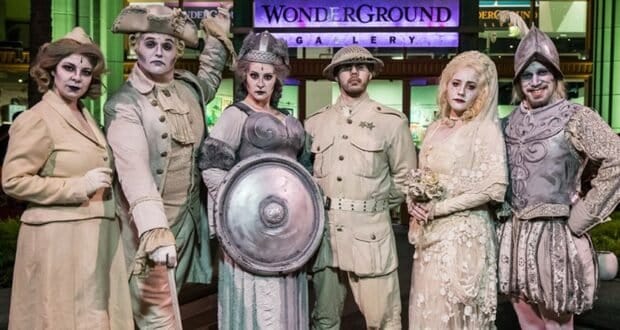 Not The Cadaver Dans, But Another Disney A Capella Group Has Materialized

All things spooktacular are well underway at the Disney Parks! At Walt Disney World Resort, Guests enjoy the Halloween decor, treats, and the special-ticketed Disney After Hours Boo Bash. Over at Disneyland Resort, Guests are getting all sorts of spooks as the Haunted Mansion is transformed into the Haunted Mansion Holiday for Halloween and the special-ticketed Oogie Boogie Bash. But Disneyland isn’t stopping there! The Downtown Disney District (similar to Walt Disney World’s Disney Springs) is a bubbling cauldron of exciting seasonal things to do, sights to see, shopping to explore, and Halloween treats to discover! The excitement includes a dose of entertainment from a frightfully fun a capella group… and no, we’re not talking about the Cadaver Dans.

RELATED: The Dapper Dans Make a Harmonious Return to Disneyland

When most Disney fans think of a Disney a capella group, their minds tend to go to the Dapper Dans. Dapper Dans are a talented Barber Shop quartet that entertains Guests on Main Street, U.S.A. at both Walt Disney World and Disneyland Theme Parks. During the Halloween season, however, the “Cadaver” Dans come out to sing a few fantastic spooks. Four dead (hence “Cadaver”) cowboys come out to Frontierland at Magic Kingdom and Disneyland during special ticketed events. There is also a Haunted Mansion variant that performs near Haunted Mansion with sunken eyes, tail-suits, and all things 19th century. But, they aren’t the only Disney a cappella group! Check out a video of the Frontierland Magic Kingdom Cadaver Dans here!

Often overlooked, are the Disney SCAREolers that have been entertaining Guests for a few years now! Disney announces the addition of this eerie entertainment performing once again this year by sharing: “As six of the 999 Happy Haunts, The SCAREolers will delight you with frightfully fun a cappella music. This ghostly glee club sings your favorite Halloween songs from “I Put a Spell On You” to tributes to your favorite Disney Villains! Be sure to see them perform, Friday through Sunday evenings through October 31, 2021, before they return to their crypt!”

RELATED: Dapper Dans Sing ‘A Dream Is a Wish Your Heart Makes’ from ‘Cinderella’

Anyone else wish Disney would bring the SCAREolers to Disney Springs at Walt Disney World? Of course, we still feel like nothing can top the Magic Kingdom and Disneyland performances of the beloved Cadaver Dans! If you haven’t had a chance to hear the SCAREolers perform, check out the YouTube video below of one of their sets at Downtown Disney District:

2021-09-14
Jamie Sylvester
Previous: Cast Members Say Goodbye to ‘Finding Nemo: The Musical’ at Disney’s Animal Kingdom
Next: Finding Nemo: the Musical to get an all-new revamp for 2022