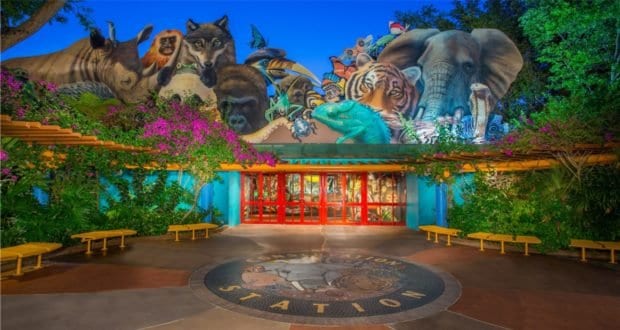 Things You May Have Missed at Disney’s Animal Kingdom

Have you visited Walt Disney World enough to know your way around? Think you’re an expert on all things Animal Kingdom?  Maybe you missed your calling as a cast member? Let’s test that theory! Here are ten things that the average WDW guest may not have stumbled upon in Animal Kingdom. How many of these have you missed? Not to worry, you can always add them to your list for next time!

It’s hard to miss the Tree of Life – it’s at the heart of Animal Kingdom, and it’s 145 feet tall!  But you may have missed the “hidden” trail that allows you to come face to face with some of the splendid carvings covering the tree (you may even be able to reach out and touch them at points).  It’s one of two trails that make up the Discovery Island Trails, called the Tree of Life Garden Trail.  Look for the elaborately carved sign by the Otter Grotto, and explore the Tree of Life as you’ve never seen it before.

If you’re yearning to get even closer to Animal Kingdom’s icon, why not take a break from the Orlando heat and chill out inside the Tree of Life?  That’s right, you can walk right inside the base of the tree and enjoy the 3D show “It’s Tough to be a Bug”, while seeing some fabulous carvings that you can’t see any other way.  Of course, the film itself is pretty cool too, featuring audio-animatronics and some fun 4D effects.

Ever wonder what it’s like to be a vet at Disney’s Animal Kingdom?  Or maybe you’re curious about what the park’s animals eat?  Hop on the Wildlife Express Train and check out the Conservation Station at Rafiki’s Planet Watch.  Here, you’ll be able to see where sick and injured animals are treated (you may even catch a procedure happening before your eyes), learn how meals are prepared for the animals throughout the park, and even see some insects, spiders, amphibians and reptiles you won’t see anywhere else in the park.

If you have a paleontology fan in your party, you definitely shouldn’t miss the Cretaceous Trail in DinoLand USA – but because it’s much less obvious than other larger trails in the park, there’s a chance you have.  It won’t take you too long to stroll down this short trail, where you’ll encounter lush prehistoric-looking vegetation and several dinosaur statues that are perfect for photo ops (don’t forget to look in the bushes, too, where you might find a dino or two hiding!).

Budding anthropologists and primatologists, take note: Jane Goodall visited Animal Kingdom, and left her mark!  She was given a tour of the park as it was being built, and when she mentioned there were no chimpanzees on the Tree of Life, Imagineers rectified the situation.  They carved a huge chimpanzee to resemble David Greybeard, one of the chimps she had studied, right into the roots of the tree.

One of my absolute favorite snacks in all of Walt Disney World is the cinnamon-glazed pecans and almonds, sold piping hot at select snack carts on property (they’re delicious cold, too!).  They can be a little difficult to find, as not every snack cart sells them.  So you may have missed them at the teensy Dino Diner, adorably made to look like a dinosaur RV, in the carnival game area of DinoLand USA.  Be sure to check out the other yummy snacks here too!

Did you know you can visit one of the biggest bats in the world at Animal Kingdom?  Check out the Malayan flying foxes hanging around (literally) in their enclosure on the Maharajah Jungle Trek.  These massive, fascinating mammals have wingspans of almost 6 feet, which explains why they’re actually called “megabats”!  And don’t worry, these gentle giants won’t drink your blood – they’re fruit bats, and you may even get to watch them chowing down on some fruit.

Even if you’re a frequent visitor to Pandora – World of Avatar at Disney’s Animal Kingdom, there are still a few things you may have missed.  The next time you’re leaving Avatar Flight of Passage, look for three red handprints on the wall, accompanied by initials (JC, JR, JL).  These are the handprints and initials of James Cameron, who directed Avatar; Joe Rohde, lead Imagineer of Pandora; and Jon Landau, the producer of the film.

We all love Hidden Mickeys!  This one, a grinning graffiti-esque Mickey located on a wall in the Harambe Market, isn’t exactly hidden, as it’s pretty easy to spot.  But it does boast a hidden message, the meaning of which most guests may have missed.  Under Mickey are the words “Fichwa! Fellow”; in Swahili, “Fichwa” means “hidden”.

Did you know that originally, there was an area of mythical animals (think unicorns, sea serpents, and dragons) planned for Animal Kingdom?  It was to be called “Beastly Kingdom”, and while it was never built, you can still see remnants of the park-that-never-was, if you look in the right place.  Check out the dragon silhouette on Animal Kingdom’s logo, griffins and unicorns on the park’s garbage bins and lamp posts, mythical beast carvings at the park’s entrance, and the “unicorn” parking lot section.  It’s Animal Kingdom’s very own lost world!

2021-06-25
Stacy Milford
Previous: Planning a Resort Day at Disney’s Old Key West
Next: Why You Need To Plan A Trip To Disneyland Right Now