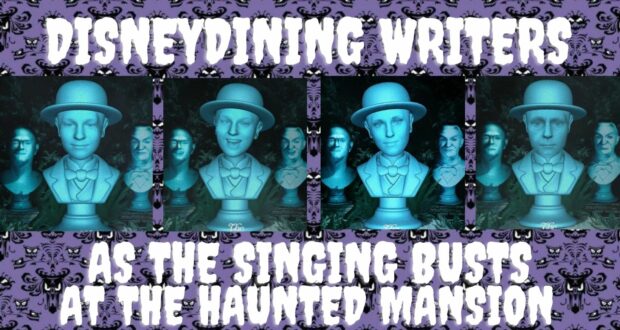 The DisneyDining writers became Happy Haunts for Halloween, and you can too!

The DisneyDining writers joined the Happy Haunts and became the singing busts at the Haunted Mansion, and you can too!

I mean, why not? They’ve invited us every single time we’ve visited the mansion:

“Our library is well-stocked with priceless first editions — only ghost stories, of course — and marble busts of the greatest ghostwriters the literary world has ever known. They have all retired here, to the Haunted Mansion.

Welcome, foolish mortals, to the day before Halloween! As with every “special” day on the calendar, Disney goes all out with the celebrations. From special events, festive decorations, activities, and merchandise in the parks to online activities and magical videos on Disney Parks’ official YouTube channel, the Mouse knows how to have a great time with any celebration on any day!

And that’s exactly what Disney Parks has done during the spookiest season of the year on Instagram with a new AR (Augmented Reality) tool that lets fans become a Happy Haunt!

Just login to your Instagram account on your smartphone, and search “Walt Disney World,” which takes you to their official Instagram page. From there, click on the three little stars to the lower right of your screen. 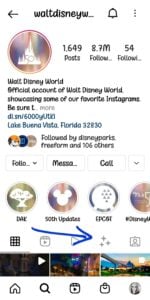 When you click the three stars, just under them, you’ll see 4 squares with different AR options from which to choose. Click on the top left square that reads, “Haunted Mansion AR.” This will take you to the next screen where you’ll see a tab that reads, “Try It.” 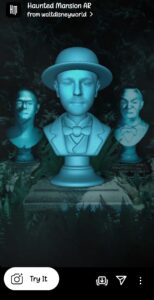 Click the “Try It” tab and watch as you are transformed into one of the singing busts from the graveyard scene inside the Haunted Mansion attraction! There are two options: a male and a female singing bust. When it came to the DisneyDining writers, none of us really gelled with the lady singer; she gave us extra double chins, so we passed. 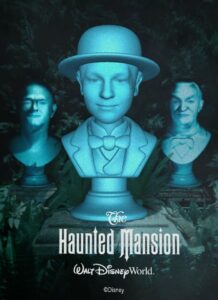 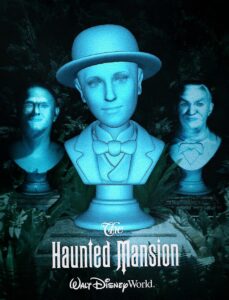 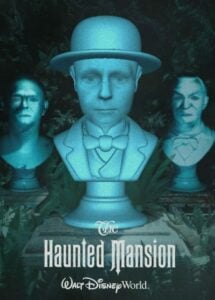 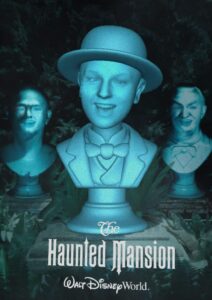 Here we are: Caitlin, Becky, Paula, and Krysten. Krysten was already singing when the camera flashed!

Every fixture and character within the Haunted Mansion attraction has a fandom to it. We are just obsessed with the attraction! And the singing busts are no different! The Graveyard Jamboree is even featured in Muppets Haunted Mansion, which debuted on Disney+ on October 8. It’s the only time in the movie when the song “Grim Grinning Ghosts” is sung. Can you name all 5 celebrity cameos?

That’s Skai Jackson from Disney Channel’s Jessie, Pat Sajak from the long-standing game show Wheel of Fortune, Geoff Keighley from The Game Awards, Justina Machado from Elena of Avalor, and Craig Robinson from The Office. RELATED: There’s an actual cemetery at The Haunted Mansion. No, not that one.

Now it’s your turn! Join us in the Graveyard Jamboree, and be sure to share your screenshots in the comments!