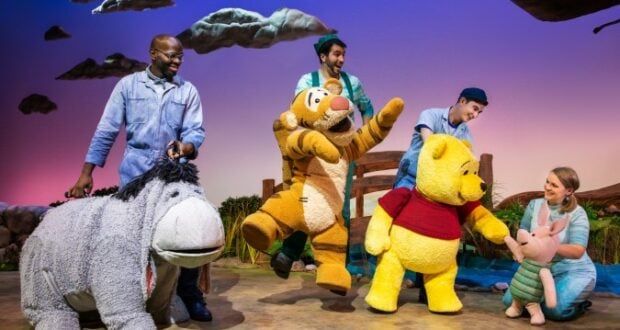 Winnie the Pooh has always lived in the Hundred Acre Wood, under the name of Sanders. (Both Disney and A. A. Milne say so.) 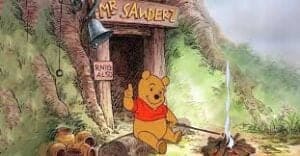 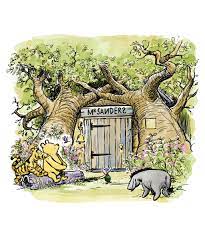 But Pooh Bear has packed up and temporarily moved to New York City, specifically to Time Square’s Theatre Row, where he and all his Hundred Acre Wood pals are starring in Winnie the Pooh: The New Musical Adaptation, set for its official opening on November 4, with first performances beginning yesterday.

In fact, the theater, which was previously called the Acorn Theatre, was just renamed this week ahead of next month’s opening. It’s now called the Hundred Acre Wood Theater!

Winnie the Pooh, Piglet, Christopher Robin, Eeyore, Kanga, Roo, Rabbit, Owl, and Tigger are all onsite for the brand-new musical, which was developed and is being presented by Jonathan Rockefeller. His company, Rockefeller Productions was the brains behind the creation of The Very Hungry Caterpillar Show and Paddington Gets in a Jam, both of which–like Pooh Bear’s musical–feature life-size puppets.

RELATED: Stay in Pooh Bear’s treehouse–under the name of Sanders–with this ‘BearBNB’

The adaptation is exactly that–a new story, but with music from the iconic Sherman Brothers, such as the happy tune “The Wonderful Thing About Tiggers” and “A Rather Blustery Day.”

RELATED: The music of Disney attractions

The cast includes Jake Bazel as Winnie the Pooh, Chris Palmieri as Tigger, Kirsty Moon as Piglet and Roo,  Emmanuel Elpenord as Eeyore, Rabbit, and Owl, and Kristina Dizon as Kanga and Owl.

Some performance dates are already sold out. Tickets range from $42 per person to over $180 per person. To learn more about the show or to purchase tickets, you can visit winniethepoohshow.com.