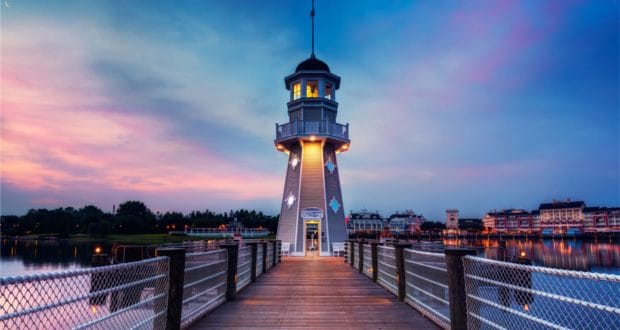 Last week I was fortunate enough to enjoy a one night stay at Disney’s Grand Floridian Resort & Spa. On October 23, my daughter and I were hosted for a one night stay at Disney’s Yacht Club Resort. The timing was great, because the other stay was fresh in my mind. At first I thought that I could compare the two places, but I’ve since realized that there is nothing to compare. They are both incredible in their own special ways.

I can’t begin to describe how excited I was to stay at Disney’s Yacht Club. I’m a huge fan of Crescent Lake, it’s my favorite place to walk in at Walt Disney World. I’m a local Passholder, and before COVID-19 you would have found my family and me in the area, taking a walk and then enjoying the street performers at Disney’s BoardWalk. I’ve spent a fair amount of time at Yacht Club, but I had never spent a night there before. It won’t be the last time.

We decided to hit the resort as if we were tourists, not locals. We were dropped off at the resort on Friday morning, so we didn’t have a car. I had put down a check-in time of 8:30am, knowing that it would never happen. My idea was that we would leave our luggage, then walk over to Disney’s Hollywood Studios. I was shocked when I received a text at 8:11 that our room was ready! I know that there is no guarantee that your room will be available before 3:00, but Disney will try to make it happen if you give an earlier check-in time.

We got our MagicBands from the front desk, then headed to our room. We had a Standard View room. The space was big enough for five, with two queen beds and a sofa sleeper. The nautical theme of the resort continued into the room. At Grand Floridian we had a view of the monorail, our view here wasn’t quite as glorious. We were on the third floor, and the roof for the covered walkway to Stormalong Bay was directly below us. There was a large tree in front of that. Still, we could see Disney’s BoardWalk to the right, and the top of the Eiffel Tower at Epcot on the left. The balcony was still the perfect place for my coffee in the morning.

I was once again pleased with the safety precautions. There was plenty of hand sanitizer in the lobby, and disinfecting wipes by the elevator on the main floor. The room was spotless. The TV remote was in a sealed bag marked “clean”. There was a card next to it that stated the cleaning procedures. I have no doubt that the room was as clean as possible.

We walked to Disney’s Hollywood Studios, and were there for a good part of the day. We then walked back to the resort, eager to enjoy one of the main draws of Disney’s Yacht Club. I’m of course talking about Stormalong Bay, which many people consider to be the best pool complex at Walt Disney World.

For years I’ve walked past Stormalong Bay, but I had never been able to go in before. I was especially excited to try the shipwreck slide. It’s one of the most creative water slides that I’ve ever seen, and I’ve wished that I could try it for years. We chatted for a couple of minutes with the friendly lifeguard at the top. The slide was so much fun! When we rode for a second time he welcomed us back and asked us what we thought. We stayed at Stormalong Bay for a long time. I especially enjoyed the lazy river. It felt strange to not wear a mask in public, but it was easy to keep a safe distance from others. I agree, I think that Stormalong Bay is the best pool complex at Walt Disney World. The size is perfect, and there is something for everyone.

There was a problem with my daughter’s MagicBand, it wasn’t connected to the room, so we needed to stop by the front desk to fix that. The Cast Member was very apologetic that there was an issue, and he took care of it right away. The quality of service was excellent all around, everyone was helpful throughout the stay.

We had a reservation at Ale & Compass Restaurant for dinner. We’ve dined there many times in the past, but it was always for breakfast or lunch. (Lunch is not currently available.) I have always liked this restaurant, and I thought that it could be the perfect place to unwind for dinner. Unfortunately, I was wrong. The restaurant is open until 9:00, and our reservation was for 8:10. We checked-in, and I left my number so that they could text me when our table was ready. I received the text a couple of minutes later, but everything fell apart. Temperature checks are required to dine at the resorts, and there was no one there to take our temperatures. We waited and waited, and then someone asked us what we were doing (I think she assumed that we weren’t supposed to be there). I explained what was going on, but we still could not be seated until the temperature check was done. Eventually a manager came over and took care of it, but in total it took about 15 minutes from the time I received the text until we were seated.

After we had our table we waited some more. I’m fairly sure that they forgot that we were there. When our server finally came over, the rest of the meal went smoothly. Our server was pleasant and had a good sense of humor. Food-wise, it was my least favorite meal that I’ve had at the Ale & Compass, but I do understand that most places have a limited menu right now. I don’t think that I’ll return until the menu expands, or they offer lunch again.

That was really the only rough spot of the stay. I was expecting to have a $25 parking charge on my bill. I was ready to say something, since we didn’t have a car, but they already knew so there was no parking fee. Since we had Disney Park Pass Reservations for Epcot, we were able to stay in the room fairly late. As I already mentioned, Keurig coffee on the balcony was a great way to start the day. The view wasn’t as nice as the one we had at Grand Floridian, but we grew to appreciate it.

Once we checked out, we left our bags with bell services. They gave us a card that we needed to turn in when we picked up our stuff. We then walked over to Epcot. When we were done there we walked back to the Yacht Club, gave the card to someone, and then we received our things. It was an easy and safe way to store our bags. We waited for our ride home in the lobby (I love the smell of that lobby!), sad that our short stay at Disney’s Yacht Club Resort was over. I knew that it was going to be special, but it was even better than I hoped that it would be.

Once again, I’d like to thank the people at Magical Vacation Planner who made this possible for us. They truly are the MVPs when it comes to making the most of your time at Walt Disney World. We enjoyed our stay immensely. I’d also like to thank Walt Disney World for taking the extra precautions to keep people safe. Things are different right now, but it’s still possible to have a magical time.