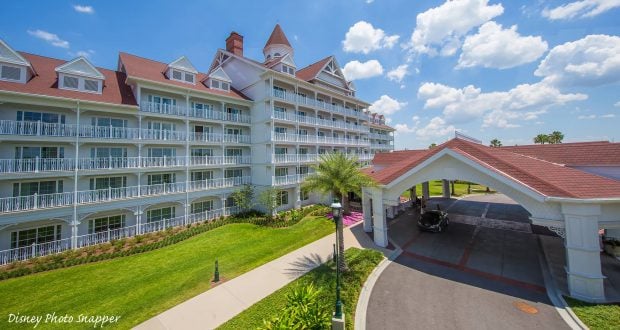 On October 16 I enjoyed a one-night hosted stay at Disney’s Grand Floridian Resort. I’m a local Annual Passholder, so I don’t often stay on Walt Disney World property. I’ve visited the resort countless times, but I had never stayed there before. As she often is, my daughter was my companion. We had an incredible staycation.

I checked in using the My Disney Experience App a few days in advance. The app can be wonderful and it can be a headache, I’m happy to say that this was fast and easy. Even though check-in starts at 3:00, I decided to try for a couple of hours earlier. We arrived at the resort at 12:40, and I full well expected to have to wait for our room. Much to my surprise, right after we went through the security booth I received a text that our room was ready, and I was told the room number. I also received a notification on the My Disney Experience App.

We parked and went into the lobby. We were immediately greeted by a Cast Member who was ready to help. He explained that the first digit of our room number was the building number and the second digit was the floor. He also gave us simple directions to the correct building.

It was a short walk to our building. Since our room was on the fourth floor, we knew we’d be taking the elevator. There were hand sanitizer and a dispenser with disinfecting wipes outside of the elevator on the first floor. That was good to see, since elevators are high-touch areas.

The safety measures continued once we entered our room. It smelled so clean! The TV remote was in a bag that showed that it had been disinfected, and there was a placard that explained the enhanced cleaning procedures. I do believe that the staff is doing all that they can to ensure that the rooms are free from not only COVID-19, but other viruses as well.

Our room was an Outer Building Garden View room. We had two queen beds, a sofa, and the other furniture that you expect to find in any hotel room. There was a fully stocked Keurig (I think I squealed with delight when I saw this, I’m a coffee drinker) and a refrigerator. The room was a decent size, but it was not huge. We had plenty of space.

My favorite part of the room was the view from the balcony. I could have stayed out there all day! We were on the marina, and we could see the monorails come and go. If we looked way to the right, we could see Cinderella Castle. There were two chairs and a table on the balcony, and they got a lot of use during our one-night stay.

The last two resorts that I stayed at were Disney’s Riviera Resort and Gran Destino Tower at Disney’s Coronado Springs Resort. Because these were both brand new, I think that our room at Disney’s Grand Floridian felt a little bit dated. That is not a complaint, it was still gorgeous, but it did have an older feel. I liked the small Disney touches, such as the black and white picture of Alice and the Mad Hatter having tea. The resort didn’t scream “Disney”, but there were whispers.

We decided to take advantage of the jogging trail and go for a walk. That leads over to Disney’s Polynesian Village Resort. Since we only had a few hours, we didn’t go in one of the pools. The children’s play area was closed, but the two pools were both open.

After we explored a little while we headed back to the room for a few minutes. We had Disney Park Pass Reservations for the Magic Kingdom. We took the monorail there. Since it was the middle of the afternoon there was no wait. When we returned, we took the ferry because the resort monorail line was long. There was a wait, but it wasn’t too bad. There were seats marked off for social distancing. It was obvious that Disney made sure that they could fit as many guests as safely possible on the ferry, while keeping everyone safe.

We used Mobile Ordering for a late dinner from Gasparilla Island Grill. This took a while. Like the other restaurants where you Mobile Order, we had to wait outside. We weren’t the only ones who grew a bit impatient. The food was in a to-go bag, and it included condiments. We both enjoyed our meals.

Originally the plan was to enjoy our dinner on the balcony, but we decided to instead stay inside. That was because Happily Ever After is shown on channel 74 each night from 6:00-10:00. While we were watching it, I imagined what it would be like to watch the show live from the balcony. We wouldn’t have been able to see the whole thing, but it still would have been magnificent.

One more quick thing about the Walt Disney World resort television offerings. If Must-Do Disney is part of your tradition, it has been moved. You can now watch Stacey on channel 73. The show has not been updated, she still talks about FastPass+ and Disney’s Festival of Fantasy Parade. The section on the water parks is there as well. I had heard several people say that Walt Disney World had removed the continuous show from their line-up, but that isn’t the case. The channel guide had not been updated.

The beds at Disney’s Grand Floridian are soft and comfortable! My daughter and I were both sound asleep within minutes. In the morning, there was a lot of noise outside. They were doing something to another building, and the machine that they used made quite a racket. They started well before 8:00, and it was loud enough to wake up light sleepers.

Besides the view from our balcony, I had two favorite parts of my short stay at Disney’s Grand Floridian Resort. The first was the lobby. Most of my visits have been to see the Gingerbread House (which sadly won’t be there this year), so it was nice to just take it in the way that it’s seen most months of the year. I think that the lobby of Disney’s Grand Floridian Resort is one of the most magnificent buildings in the area. Gorgeous does not describe it.

My other favorite part was the people. The Cast Members were all helpful and friendly. If I had a question, someone was always right there with the answer. When we got turned around walking back to our room, someone appeared to point out the path that we needed to take. I had a brief chat with a housekeeper, and she had such a sweet personality! These people work hard, and I hope that they know that they are appreciated.

I’d like to thank the people at Magical Vacation Planner who made this possible for us. They truly are the MVPs when it comes to making the most of your time at Walt Disney World. We enjoyed our stay immensely. I’d also like to thank Walt Disney World for taking the extra precautions to keep people safe. Things are different right now, but it’s still possible to have a magical time.