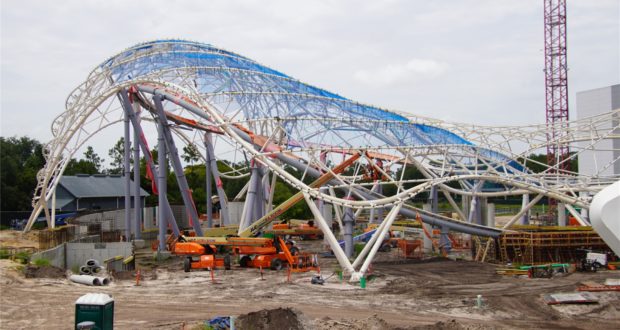 When the project was announced at the D23 Expo in 2017, its completion date was intended to coincide with the start of WDW’s 50th anniversary festivities. But, much like EPCOT’s Guardians of the Galaxy: Cosmic Rewind, visitors are left waiting. While Disney has yet to announce an opening date, rumors have the new projected opening date sometime in 2022.

The ride is actually a clone of the Shanghai Disneyland TRON Lightcycle Power Run ride, which opened in the summer of 2016. The picture below provides us with an idea of what we can expect Magic Kingdom’s finished TRON project to look like:

Bioreconstruct took to Twitter to share two new photos of the current construction progress of TRON at Magic Kingdom. With the first photo below, @bioreconstruct shares: “Current blue netting at Tron canopy.”

@bioreconstruct continues with the second photo below stating: “Scaffolding rising to the portal at top of the Tron show or gravity building where track enters. Arrow at bottom where trains launch into the outdoor swoop of track. Curved steel at right to be guest entrance. Likely a temporary doorway there.”