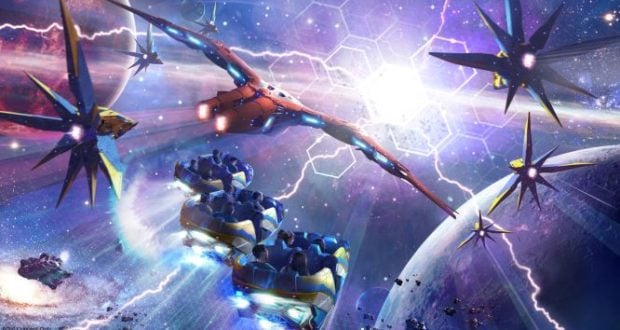 What We Know So Far About Disney’s Guardians of the Galaxy: Cosmic Rewind

When Guardians of the Galaxy took cinemas by storm in the summer of 2014, audiences could’ve never imagined that there would someday be a Disney attraction centered on this lovable “bunch of a-holes”, and not just because Universal has thus far held a monopoly on Marvel-related theme park attractions. An underdog team comprised of a foul-mouthed raccoon, a redemption-seeking assassin, and their wisecracking ringleader doesn’t exactly scream Disney, which is what probably made the announcement of Guardians of the Galaxy: Cosmic Rewind such welcome news to park-goers yearning for an experience with the potential for a bit more edge. While the content will undoubtedly remain family-friendly, the ride’s out-of-this-world thrills will have the potential to breathe new life into an underutilized section of Epcot. Here’s what we know so far about this Cosmic Rewind.

This indoor roller coaster is based on the hit Marvel film series and will be Walt Disney World’s first attraction centered around one of the comic titan’s iconic properties. Retrofit into the former Universe of Energy building, the ride will feature all the components we come to expect from a theme park attraction, including an elaborately-themed queue and pre-show that set the stage for the adventure its riders will embark on as they engage in all manner of intergalactic hijinks while accompanied by this merry band of otherworldly outcasts. The journey begins in the “Galaxarium”, which has been described as a planetarium-like exhibit that highlights the parallels of our world and Xandar, home of the Nova Corps. When Rocket Raccoon, Groot and the rest of the gang arrive on the scene, guests are hurtled into space on a mission that transports them “back to the Big Bang”. The exact details of this odyssey through the cosmos are being kept under wraps, though it will surely be jam-packed with the action, humor and heart we’ve come to expect from this ragtag bunch.

Unlike traditional roller coasters, Cosmic Rewind is being billed as a “storytelling coaster”, featuring an OmniCoaster ride system with the ability to pivot ride vehicles — based on the Guardians’ Milano starship — 360 degrees. This allows for the opportunity to not only send riders forwards, backwards and… um, sidewards (?), but also keeps them from missing out on any of the story elements as they blast past otherworldly scenery while presumably evading all manner of alien encounters. When combined with a rockin’ sound system that will no doubt feature classic songs straight off one of Star-Lord’s mix tapes, this one-of-a-kind ride becomes a real feast for the senses while also laying claim to being one of the longest enclosed roller coasters on this planet, if not others.

After years of a rumored Guardians-themed attraction coming to WDW, crews finally broke ground on Cosmic Rewind in August of 2017. This massive undertaking has already seen 960 truckloads of cement poured on site to construct the foundation of the “gravity” building (which houses the coaster itself), and that’s not even counting what went into transforming Future World East into what will become known as World Discovery. The show building — where the ride queue and Galaxarium are located — has already been completed, though the original targeted opening date of the project has been cast into serious doubt after work stoppages caused by the COVID-19 pandemic. Construction was scheduled to be completed in the fall of 2021 so that the ride’s debut would coincide with the kickoff of WDW’s 50th anniversary celebration, but a 2022 opening seems more likely at this point.

As previously mentioned, Cosmic Rewind is set to be the centerpiece of this re-imagined area of Epcot, also home to such popular attractions as Mission: SPACE and Test Track. World Discovery aims to expand upon the park’s original mission statement of celebrating technological innovation and world culture by further embracing intergalactic exploration with not only the Guardians-themed attraction but also the Space 220 restaurant. Here guests will enjoy views of earth from a simulated space station 220 miles above our stratosphere while dining on modern American cuisine that can be paired with 1000 different wines or an extensive selection of craft beers. Meanwhile, the PLAY! Pavilion will allow visitors to mingle with some of their favorite characters in an interactive city that is said to be “beyond anything [Disney has] ever created”.