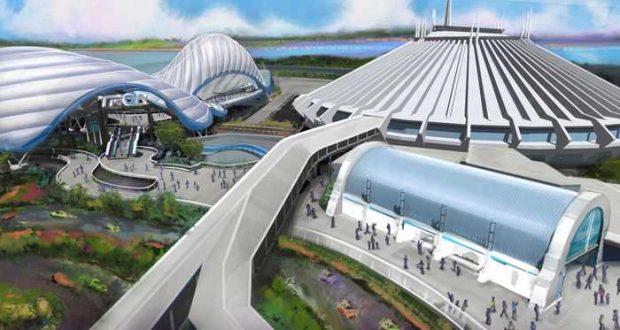 When TRON — a movie about a computer hacker who ends up being sucked into a digital world — was released, it was a film that could be considered to be ahead of its time. Its global box office haul (just over $33 million) seems quaint by today’s standards, though it remained Disney’s highest-grossing non-animated film for five years. Nearly four decades after its release it has grown to become a cult classic, spawning a fiercely loyal fan base and, eventually, a sequel. This quirky little sci-fi adventure just doesn’t seem to know when to quit, and now it’s headed to the Magic Kingdom in the form of a roller coaster dubbed TRON Lightcycle Power Run. Here’s what we know about this upcoming addition to Walt Disney World.

Based on the classic 1982 film and its 2010 followup, the attraction begins with “Users” entering this virtual universe through a portal where they ditch the real world in favor of a digital transformation that allows them to challenge the intimidating “Programs” in a competition to secure eight energy gates. Each entrant becomes a main character as they’re thrust into a high tech, blue-tinged digital world where they race around the Power Run on light cycles at blazing speeds in order to not only try to earn their escape, but merely attempt to survive.

In reality, the plot of the ride is, of course, nothing more than an excuse for riders to board light cycles and zoom through the glowing labyrinth known as “The Grid”, where they’ll be surrounded by strobing neon lights and projections set to a futuristic soundtrack featuring music from Daft Punk while they try to earn the victory for Team Blue.

This attraction shares some similarities to both Test Track and Space Mountain, the classic roller coaster located adjacent to Tron’s new home in Tomorrowland. Much of the ride takes place inside a darkened building (like Space Mountain), before hurtling riders into the light (a la Test Track) as the light cylces carry their passengers outside where they’re greeted by the central Florida humidity before snaking back into the building to continue their journey back to reality. At top speed, the ride can reach upwards of 60 mph, making it the fastest roller coaster at WDW.

However, speed isn’t the only novelty of this attraction, which puts riders aboard uniquely-designed individual ride vehicles that have guests lean forward and hold on tight as they power ahead like competitive speed cyclists while a pad secures them in place by gently cradling their lower back. It may not be for everyone, but it will surely offer a different perspective to riders more accustomed to traditional roller coasters.

No, it wasn’t created in a lab by some mad scientist. But the ride is a clone of the Shanghai Disneyland TRON Lightcycle Power Run ride, which opened in the summer of 2016. As such, there will be minimal differences between the two attractions, with most of the changes being made due to spatial constraints or cultural differences. Another attraction that was cloned from an overseas park is the upcoming Remy’s Ratatouille Adventure, which makes its way to Epcot via Disneyland Paris and is set to open October 1st, 2021.

As we mentioned previously, the attraction will be located between Space Mountain and the Tomorrowland Speedway in (where else?) the Tomorrowland section of the park. It is being constructed on a portion of property that was originally intended to be the home of a Matterhorn Bobsled ride that would never end up being erected at WDW. With its glowing lights and streamlined futuristic architecture, this attraction will no doubt become a centerpiece of Tomorrowland, and will hopefully enhance the aesthetic of Space Mountain rather than overshadow it.

When the project was announced at the D23 Expo in 2017, its completion date was intended to coincide with the start of WDW’s 50th anniversary festivities. But, much like Epcot’s Guardians of the Galaxy: Cosmic Rewind, visitors will likely have to wait a little bit longer to visit The Grid due to delays caused by the global coronavirus pandemic. Rumors have the new projected opening date sometime in 2022.

2021-06-01
Mike Riccardini
Previous: What We Know So Far About Disney’s Guardians of the Galaxy: Cosmic Rewind
Next: 10 Questions & Answers About Disney Springs