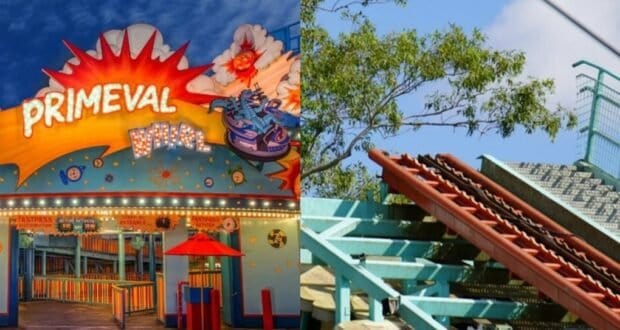 Back in July 2020, several sources shared the news that a memo went out to Walt Disney World Resort Cast Members stating Primeval Whirl at Disney’s Animal Kingdom, Rivers of Light at Animal Kingdom, and Stitch’s Great Escape at Magic Kingdom would be permanently closing. Since the removal of Rivers of Light at Disney’s Animal Kingdom, we have seen a replacement with daytime entertainment called “Disney KiteTails“. While there isn’t much discussion about what’s to come into the location of Stitch’s Great Escape at Magic Kingdom, rumors are flurrying a Wreck-It-Ralph attraction would be a fun addition. That leaves us with Primeval Whirl. While the ride has sat deserted for well over a year, we’re now seeing the demolition begin.

A photo from within Disney’s Animal Kingdom notes: “Fence at demolition of the Primeval Whirl entrance”:

@bioreconstruct continues with “Demolition of Primeval Whirl seen through a tall scrim.”

The following three photos were taken on October 2 and noted with “Areas of cut roller coaster track at the demolition of Primeval Whirl.”

RELATED: Finding Nemo: The Musical to get an all-new revamp for 2022

Were you a fan of Disney’s Animal Kingdom Primeval Whirl? The attraction opened in March 2002 and was located in the Dinoland U.S.A. portion of the Disney Park. The steel roller coaster would have theme Park riders spinning with sudden dips and twirls while clinging on for dear life in their ride vehicle! It closed in March 2020 with the pandemic and never reopened with Disney’s phased reopening. We personally will miss the coaster ride experience, but are sure Disney has big plans of how to use the space! We’ll keep you posted as we learn what’s to come in this area behind the construction walls of Disney’s Animal Kingdom.