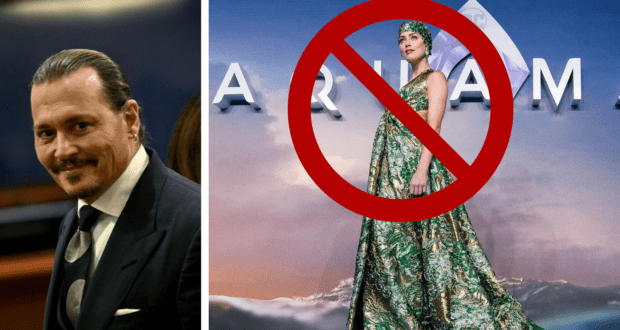 A petition online to have Johnny Depp’s ex-wife Amber Heard removed from her role in an upcoming Warner Bros. film has amassed more than 3 million signatures as of today, nearly 700,000 of which were garnered over the weekend.

A petition at Change.org that was begun in 2020 has been picking up signatures rapidly since the defamation trial between Johnny Depp and Amber Heard first began on April 11. The petition at Change.org, called “Remove Amber Heard from Aquaman 2,” reads, in part, as follows:

Amber Heard has been exposed as a domestic abuser by Johnny Depp. In his $50 million lawsuit, Johnny Depp describes many incidents of domestic abuse that he suffered at the hands of his (then) wife Amber Heard, including one incident where she punched him twice in the face and another where she shattered his finger with a vodka bottle, and his finger had to be surgically reattached. He will bear the scar from that for the rest of his life.

Since Heard’s divorce from Johnny Depp, she has systematically crusaded to ruin Depp in Hollywood, repeating multiple accounts of fake incidents in which she had actually abused Johnny Depp, but lied and created false accounts of him being the abuser. About the incident during which she shattered the bones in Johnny Depp‘s finger and nearly severed it, causing Depp to require surgery to reattach and repair it, Heard presented a false story claiming that he cut off his finger himself, dipped it in paint and scrawled obscenities all over the walls.

Likewise, Heard recounts fabricated incidents of Johnny Depp hitting her in the face when she had, in fact, punched him. Though staff and neighbors in the building where she lived reported seeing no marks on her face in the hours and days after she says Johnny Depp hit her, yet she appeared in court six (6) days later with bruises on her face, asking for a temporary restraining order, which was granted. Photos of Heard from the very next day show her full face, without makeup, and not a single bruise.

As Amber Heard is a known and proven domestic abuser, Warner Brothers and DC Entertainment should and must remove Heard from their Aquaman 2 film project. They must not ignore the suffering of Heard’s victims, and must not glamorize a domestic abuser.”

The creator of the petition, Jeanne Larson, implores readers to “do the right thing” and “remove Amber Heard from Aquaman 2.” The New York Post states that “fans also undoubtedly view the petition as reparations for Depp being dropped by Disney in his role as Captain Jack Sparrow in the fifth Pirates of the Caribbean movie after Heard accused him of abuse.”

On first hearing of the petition, Amber Heard, who plays Princess Mera in the upcoming Aquaman 2 film, dismissed it. According to Heard, “rumors and paid campaigns on social media don’t dictate [casting decisions] because they have no basis in reality.”

2022-05-02
+Becky Burkett
Previous: Bob Chapek: Disney’s Lack of liquid assets are to blame for the absence of EPCOT’s “Mary Poppins”-themed attraction
Next: May the 4th Be With You As You Enjoy These Limited-Time Disney World Treats!