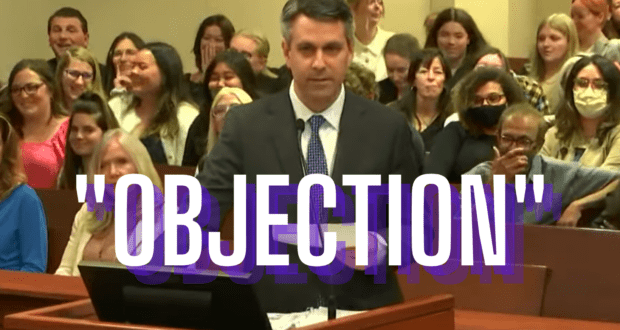 “Jack Sparrow on a Plank” drinking “Vodka for Breakfast”: Amber Heard attorney outdoes himself with sustained objections and even objects to his own question

During the defense’s cross-examination of Johnny Depp on the actor’s fourth day of testimony in his defamation trial against ex-wife Amber Heard, an attorney for Ms. Heard resorted to not playing by the rules. 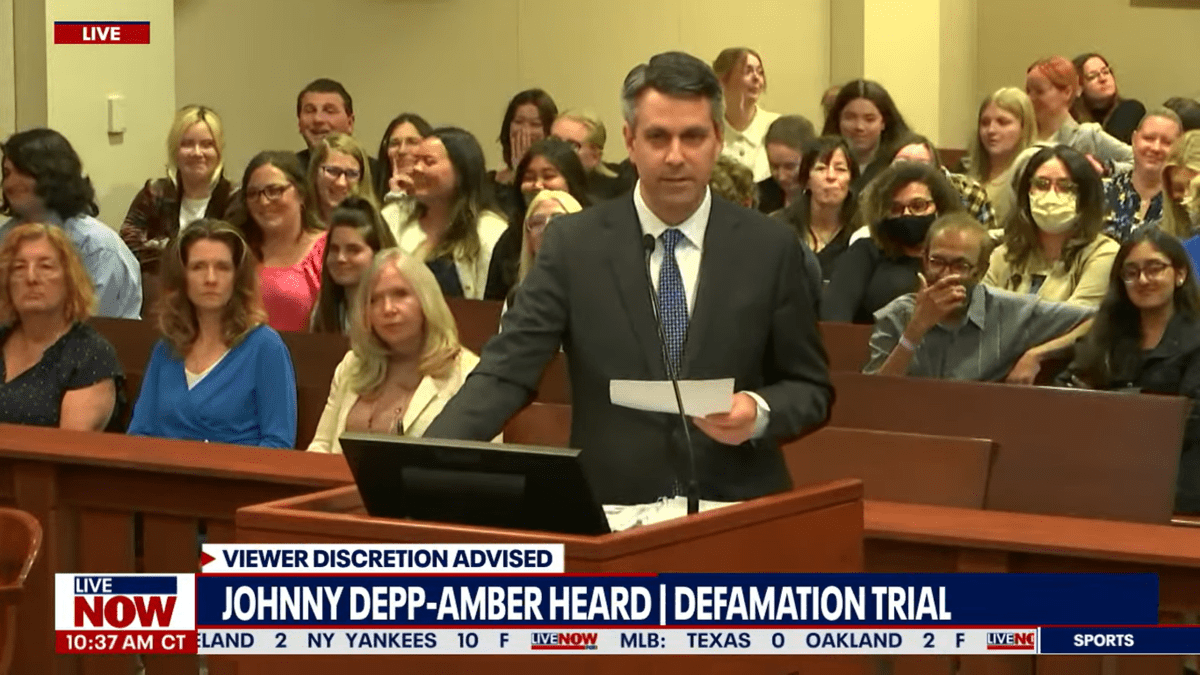 “Mr. Depp, if you could please take a look at the stack of articles in front of you,” attorney J. Benjamin Rottenborn said to Johnny Depp, referring to a stack of pages in front of him on the witness stand.

“Yes, it’s a stack of hit pieces . . . ” Johnny Depp responded before being cut off by Mr. Rottenborn.

“Mr. Depp, we’re going to try to get through this as quickly as possible,” Rottenborn interjected.

The attorney for Amber Heard then began to read through the stack of papers, each one bearing a different headline from posts and articles written about Johnny Depp from various tabloids and other publications, including Vanity Fair, The Daily Mail, Rolling Stone, The Hollywood Reporter, and others.

The first article referenced by Mr. Rottenborn was published in The Guardian. He mentioned the article to Johnny Depp, reading aloud the title from an article posted on November 15, 2014.

“May 7, 2016, ‘Johnny Depp: Friends and Family Seriously Concerned about him; Here’s why,” Rottenborn read aloud.

“Yes,” Johnny Depp answered. “How did they know?” he asked in response to Mr. Rottenborn. 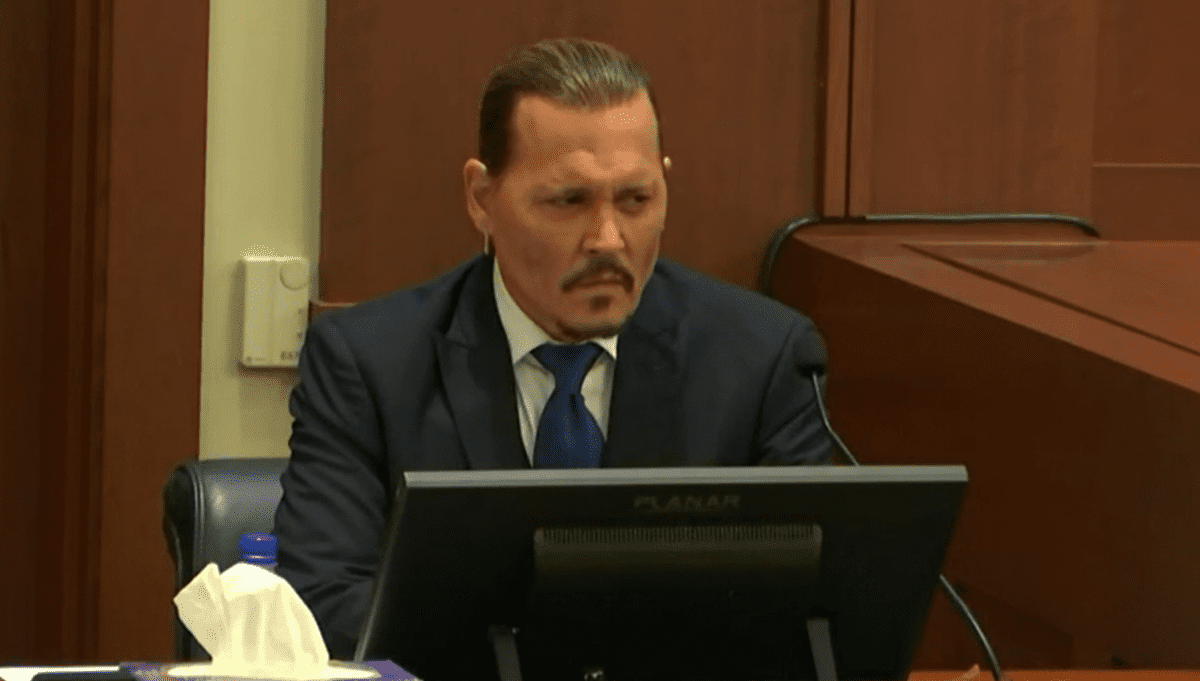 “The next article,” Rottenborn began again, “from May 1, 2017, before Ms. Heard filed for a restraining order. The headline is ‘Johnny Depp Has a Clear and Epic Sense of Entitlement, Ex-Managers Say’.”

Mr. Rottenborn continued reading headlines from various publications, including titles that had phrases like “Jack Sparrow on a Plank” and “Vodka for Breakfast” in them.

Rottenborn then proceeded to ask Depp a series of questions, many of which were clearly out of line with judicial procedures and processes, as evidenced by the sustained objections he received over the course of an approximately seven-minute-long series of questioning.

According to WomensLaw.com, there are 10 common reasons for objections in a courtroom setting. Of those noted on the website, four were cited during the Johnny Depp v. Amber Heard defamation trial on Monday. They were relevance, calls for speculation, asked and answered, and compound. An additional objection for “calls for legal” was also used in the trial on Monday. According to the website, the following reasons for objections are defined as follows:

“Relevance
You can object to the relevance of evidence if you think a piece of evidence or something a witness is saying has nothing to do with the case or it is not important in determining who should win in court.

Asked and answered
Sometimes during cross-examination, the person asking questions might ask the same question over and over again, perhaps in slightly different ways, or re-ask a question s/he had asked earlier in the testimony. What’s unique about this objection is that it could come up in two different scenarios, First, opposing counsel could repeatedly ask you or your witness the same question, hoping that contradicting answers will be given. Second, opposing counsel could repeatedly ask his/her own client the same question in slightly different ways, hoping that the client will give a better answer than one given before. Either way, a question can only be asked once, and after it has been answered, any further attempts to ask the question are objectionable.

Speculation
The speculation objection can be used in two different situations. First, if a witness does not know a fact to be true or not, but testifies about it anyway, this testimony would be objectionable as speculation. A witness must have personal knowledge of a fact to testify about that fact and put it into the court record.”

Over the course of a series of questions lasting less than 10 minutes on Monday, J. Benjamin Rottenborn, the lead attorney for Amber Heard, asked questions of Johnny Depp that violated courtroom procedures not once, not twice, but almost 20 times.

But none of Monday’s objections caught the eye of reporters like an objection on Tuesday during the trial. During another round of questions put forth by Mr. Rottenborn for a witness on the stand, the trial attorney objected to his own question.

A user named Chels Murphy posted, “I was watching live and I absolutely could not believe what I was seeing. Imagine using headlines of click-bait tabloid/gossip mags written by people who don’t even know the defendant personally as “evidence” to a person’s credibility. Meanwhile, everyone in his life past and present is more than happy to testify his true character, THAT says more than any hit piece article could ever write about him. Also, notice how no one from Ambers camp past or present has come forward with anything supportive to say about her, it’s all been negative. Which I’m not surprised since she is the TRUE ABUSER.”