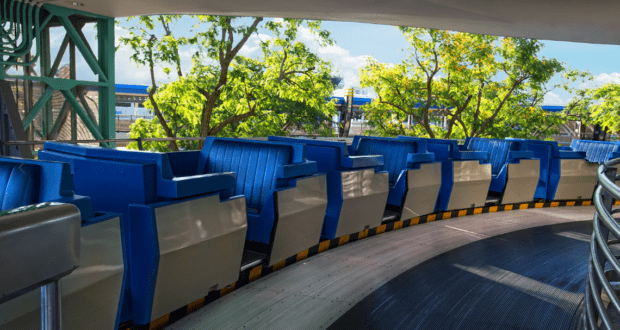 Do you ever feel like you need a vacation from your vacation after visiting the Walt Disney World Parks? There is so much to love about these four wonderful theme parks, but they can be quite exhausting if you don’t give yourself time to rest. We all know that this is easier said than done. There are plenty of places to relax and take a breather around the entire property (in fact, I think we wrote something about that once…) but we want to focus solely on the Parks. Disney Imagineers knew that families can’t go, go, go for their entire vacation, so they built in some amazing ways to let the family breathe throughout the day. Take a look at some of our favorites!

The PeopleMover ride in Magic Kingdom is notorious for several things: stopping 17 million times in the middle of the ride and being a nice, relaxing way to pass the time. The PeopleMover has been lulling people to sleep for years and years, originating in Disneyland. This ride is great because you can pay as much or as little attention as you’d like. It gives amazing views of the Magic Kingdom and cool behind-the-scenes facts. But it also goes inside Space Mountain, which gives riders about 3 and a half minutes of total darkness to relax. 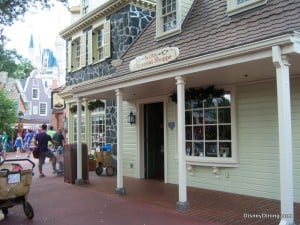 We admit, this one might sound a little strange. But it is weirdly one of the best places to just sit down and take a breather in all of Magic Kingdom. At the entrance to Liberty Square is the cutest little Christmas Shop. Ye Olde Christmas Shoppe has fun ornaments and decorations all year long. But behind this quaint store is large empty space with places to sit, drink at the water fountain, or just stretch. This area often hosts caricaturists and sometimes a Mary Poppins meet and greet. But more often than not, it’s a quiet, empty place to relax. 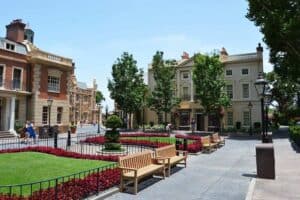 The Garden in the UK Pavilion in EPCOT

The garden behind the UK pavilion in EPCOT may be one of our favorite spots on property. It’s huge! We’re honestly surprised Disney hasn’t done something more with it, but we’re really grateful they haven’t! This back area is sometimes where the British Revolution band plays. This tribute band plays all of your favorite British songs! But when it’s not a rock concert, the gardens are quiet and peaceful, with gorgeous flowers and decor to admire. This is a great spot to let the kids run around and to take a breather yourself!

Much like the PeopleMover, Spaceship Earth is known for breaking down quite a bit. Yet, everyone still loves it! This ride gives guests a 20 minute (and sometimes longer) breather. You get to sit down in the air conditioning and either shut your eyes or your brain. The whole ride is dark and slow-moving, perfect for unwinding from the long day at EPCOT. Wait times for Spaceship Earth usually aren’t absurd, and since the ride constantly moves, the lines move pretty quickly, so you can get to your breather! 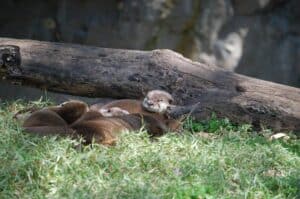 The Otter Habitat in Animal Kingdom

Even though Animal Kingdom is the biggest park, we would argue that it is also inherently the most relaxing. There are so many spots to pull off to the side and relax in this Park. But one of our absolute favorite animal habitats to visit is the Otter Habitat! This is one of the first animal areas you come across heading into Africa, and we just love to watch these silly creatures play. This habitat has several areas to sit down and watch the frolicking through the glass walls. It can get pretty crowded in there, but if you catch it at a good time, this area is such a fun haven.

The Bridge Connecting Pandora to Africa in Animal Kingdom

One of our favorite spots in all of Animal Kingdom is the bridge that connects Pandora to Africa. You can find it by going past the Harambe Theatre and continuing walking. To be honest, there is nothing special about this bridge. There isn’t even a place to sit down. But this bridge feels entirely separate from the rest of the park — like it’s a behind-the-scenes spot. The views from the bridge are stunning and it is so tranquil next to the small pond. This is a great spot to just take a quick breather before continuing your adventure! 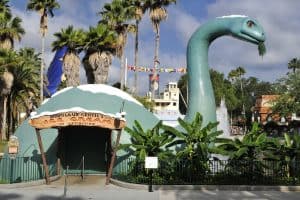 A Table by Gertie in Hollywood Studios

We’ll admit, there aren’t a ton of places to just relax in Hollywood Studios anymore. There are too many exciting things happening! But sometimes you just need that breather in order to enjoy the rest of the day. We totally get it! It’s hard to miss Gertie the Dinosaur in Echo Lake, but it is easy to walk right past it to get to the rest of the park. We love this spot as a great place to take a breather in your day. There are plenty of tables and chairs to unload your stuff and take a rest. Plus, you can grab some ice cream or snacks while you’re there! Any Spot to Sit on Hollywood Boulevard

Hollywood Boulevard has always felt so special and magical to us. Back when the street performers used to come out, we would sit and relax there for hours sometimes! Even with things so different lately, we still love to enjoy the unique ambiance of this great street. There are also tons of food options on Hollywood Boulevard, from Starbucks to pizza, you’ll never be hungry. So grab a slice and a coffee, and enjoy 1940’s Hollywood!

What places do you like to take a breather in Walt Disney World? Tell us in the comments!