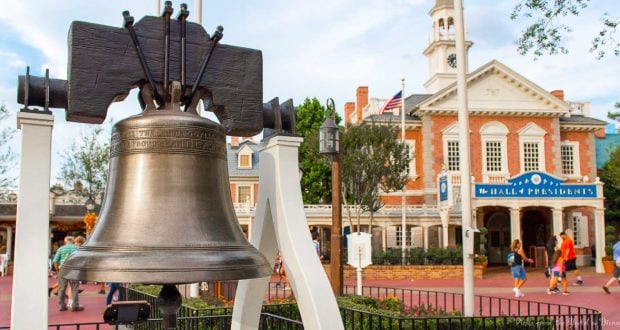 Six unique lands make up the Magic Kingdom at the Walt Disney World Resort in Florida. Clockwise, they are Main Street U.S.A., Adventureland, Frontierland, Liberty Square, Fantasyland and Tomorrowland. Each one has several things that make it different from its five counterparts. But Liberty Square stands out as altogether different from the other lands because it’s the only one that focuses specifically on an era in history—Colonial America. And because it’s Disney World, there are no boring history lessons here. On the contrary, our country’s history comes alive at Liberty Square! There’s so much to love about this land. Here are a few of the things we love!

9. The Hall of Presidents

Walt Disney World is unique in many ways—one being that it is home to several educational attractions that attract large crowds. Walt Disney himself was a patriot and a fan of knowledge and progress. There is no better sense of this at Magic Kingdom than at the Hall of Presidents attraction. The attraction is home to an audio-animatronic robot likeness of every man who has served as President of our great country since its birth. There’s a film-type presentation given that details very pivotal times in our nation’s history. The film also looks at the office of President. Toward the end of the presentation, each President is introduced by name in order of his administration from 1776 to the present day. The audio-animatronic robots look just like the men they were created to honor. Thanks to the work of Disney sculptor Blaine Gibson, the likenesses are almost eerie! Gibson also sculpted hundreds of faces for other attractions at Disney, like Haunted Mansion and Pirates of the Caribbean, making him the perfect person for the job. The Hall of Presidents production is offered to Guests several times throughout the day at Liberty Square. The theater in which it is shown is large enough to hold hundreds of Guests, so you’ll never have a long wait to experience the attraction. The Liberty Tree Tavern is a table-service restaurant in Liberty Square that boasts Colonial-style architecture and New England-inspired food. You are seated with your dining party in one of six historically-themed rooms. Each room honors a prominent historical figure in our country’s birth and growth. Lunch is an all-you-care-to-enjoy feast that includes Declaration Salad and the Patriot’s Platter—roast turkey, pot roast, roasted pork, mashed potatoes, vegetables, herb stuffing and house-made macaroni and cheese. Dessert is not to be missed—the Ooey Gooey Toffee Cake is one of the best at Disney! The lunch menu also includes an a la carte menu with appetizers, fish and chips, burgers and other entrees. Dinner is only the all-you-care-to-enjoy option, which is served family style at your table. To make a dining reservation, call (407) WDW-DINE or access the My Disney Experience app.

The Haunted Mansion is one of the most loved and most popular Disney World attractions of all time! You begin by entering a room called the Portrait Chamber that has you wondering whether the walls are stretching upward or if you’re sinking into the ground. After you leave the chamber, you’ll board a “Doom” buggy that takes you through 15 different rooms—each one more spooky than the last—fifteen rooms full of ghosts, apparitions, unexplainable sightings and lots of things that go bump in the night. There are 999 “happy haunts” at Haunted Mansion, but they’ve got room for one more. Be careful—toward the latter part of the ride, Guests “fall” out of a window! FastPass+ service is available for this attraction, and if you’re visiting during peak seasons, you’ll definitely want to have a FastPass+ time reserved before you get to Magic Kingdom. Don’t miss this experience—if you dare! Once upon a time, Disney’s Imagineers had to find a tree that would serve as Disney World’s Liberty Tree at Liberty Square. It would have been easy for them to simply purchase a tree and have it delivered. But Imagineers don’t cut corners. The enormous tree at Liberty Square is the largest living thing at Magic Kingdom, and the story behind it is big too! Imagineers decided that only a tree worthy of the title “Liberty Tree” would work, so they began to search Disney’s property for a tree. The Southern Live Oak tree that now stands at Liberty Square was found on the east side of Disney property—seven miles away from Liberty Square! When it was first chosen, the tree was about 60 feet tall and weighed over 35 tons. On June 11, 1970, the huge tree was loaded and began its 7-mile journey to its forever home at Liberty Square. The tree was planted and installed March 6, 1971—before the park opened in October of that year. Today, the Liberty Tree is about 150 years old and just keeps thriving! Be sure to take a good look at it when you visit Liberty Square—it’s a very impressive tree!

If, while you’re exploring Liberty Square, you find yourself with the munchies or an insatiable hankering for chicken and waffles, funnel cakes, ice cream and cookie sandwiches or waffles with Nutella and fresh berries, Sleepy Hollow Refreshments is the place to visit. This window-service eatery serves all these goodies and more! Columbia Harbour House is a popular quick-service restaurant inside Liberty Square. The menu includes chicken, shrimp, fish, salads and sandwiches, and it’s also a Guest favorite because of its second-floor seating with little windows that look down onto the main thoroughfare from the center of Liberty Square to the Haunted Mansion. Columbia Harbour House offers Guests a relaxing break from the crowds and heat—especially during the summer at Magic Kingdom. Sit back, have lunch, cool down and take a load off before beginning the second half of your day at Magic Kingdom.

At Liberty Square, you can board a gorgeous 3-tiered, Colonial America-inspired steam-powered paddler wheeler and journey slowly around Tom Sawyer Island Disney’s Rivers of America. Disney’s “Liberty Belle” measures 47 feet tall, and aboard the Liberty Belle, you’ll see an early American settlement, a Native American village, deer and even Splash Mountain, Big Thunder Mountain and Haunted Mansion. The riverboat is currently undergoing a refurbishment, and when it returns, it’ll be more glorious than ever! Don’t skip this experience when it reopens. It’s a 17-minute tour, and there’s not ever a long wait to climb aboard!