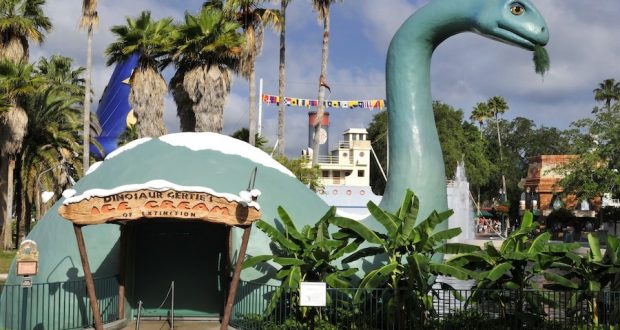 We love Hollywood Studios and the fun little facts and secrets that go along with it. This park has plenty of fun facts to share with friends and family next time you visit. Here are 10 facts and secrets about this super fun Disney theme park.

1. It Was Nearly Something Else Entirely

When the concept of Hollywood Studios first came about, it was only going to be a pavilion in Epcot’s Future World. This pavilion would have focused on the making of movies, and it would have fit right in, but definitely would have been an entirely different experience than what you see today. Luckily, Universal Studios announced the opening of their Orlando park, and Disney felt the need to compete. This lead to the expanding of their concept pavilion into a full park and thus, Disney-MGM Studios (later renamed Hollywood Studios) was born. Just like any other Disney park, Hollywood Studios is full of fun little Easter eggs. One of our favorites is found on the gas pumps right inside of the entrance, over on the right-hand side. One of these pumps displays numbers which represent the park’s opening date: May 1st, 1989.

The giant green dinosaur that stands so proud and tall in the middle of the park is actually a long forgotten character with an entire story. Her name is Gertie and she was the star of the very first animated film ever to be shown in theaters. This film was titled Gertie the Dinosaur and hit the big screen way back in 1914. The dinosaur ice cream stand was erected in honor of this incredible milestone in animation history. If you’ve ever ridden Rock ‘n’ Roller Coaster, you know that it is completely indoors and even mostly in the dark. What most people don’t know is that this thrilling ride wasn’t always indoors. The ride was first built outside in the open before the attraction building was created around it.

When watching “Fantasmic!”, most people assume the waters surrounding Mickey are fairly deep. This couldn’t be farther from the truth. While the show does use an enormous amount of water for its fountains and water projections, the pool around the stage area is really only about 18 inches deep at its shallowest point, with the deepest point being only about 6 feet deep.

When walking through the “Walt Disney Presents” museum-like exhibit all about Walt Disney’s life and upcoming Disney movies and attractions, keep an eye out for a clock. You’ll notice the clock is stuck at 9:30 and no longer ticking. This is a lovely silent tribute to Walt himself, who passed away at 9:30am on December 15th, 1966.

7. Tickled Pink and the Perfect Height

The pink color of Tower of Terror may seem like an odd choice, but it was actually very carefully calculated. You see, this tower can actually be seen from Epcot. It was painted pink in order to blend into the background of the Morocco Pavilion there. Not only was the color carefully chosen, the height was at well. The building is exactly 199 feet tall. Had it been 1 foot taller, it would be required to sport red airplane warning lights, something that would have taken away from the theming. Another crazy fact about Tower of Terror is that it was struck by lightning during the construction phase. This is a bit eerie considering the backstory of the ride. Since then, lightning rods have been added in order to avoid future lightning strikes. There are videos out there of these rods being struck by lightning.

When you walk into Toy Story Land, you shrink down to the size of a toy. In this land, Andy’s footprint is about 25 feet long, and it would take a green army man about 12 steps to travel the length of one of these footprints. Be sure to pay attention to the details of this land because they truly are amazing, and the theming actually makes you believe you’ve shrunk to toy size. We mentioned a hidden date earlier. This seems to be a running theme as far as Disney Park Easter eggs go, and more hidden dates can be found in Toy Story Land. The first is in the queue for Toy Story Mania. Watch for a board game with a barcode. Take a close look at the barcode, and you will see the date 12.15.2006. This is the date plans for this attraction were first announced. Another hidden date can be spotted in the line for Slinky Dog Dash. If you look up as you’re approaching the loading area you’ll see Rex’s original packaging. Look for the orange price tag and you’ll notice the date: 11.22. Look a bit further down and you’ll notice the price: $19.95. Together, these number makes the date November 22nd, 1995—the date Toy Story first opened in theaters.