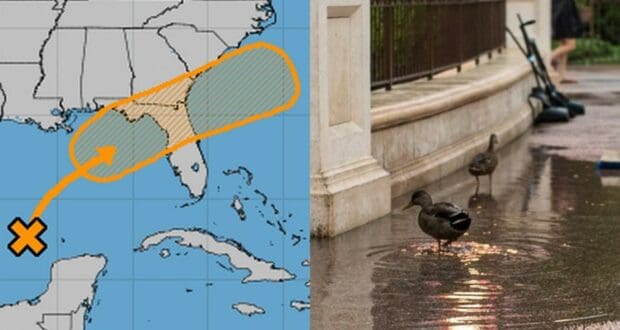 Odds Increase For Tropical System To Pass Over Florida

If you’re in or around Walt Disney World Resort over the next couple of days, grab those ponchos and keep an eye on the skies! We are in the midst of Atlantic hurricane season which means you just never know when a tropical system will be making an appearance. Recently we have seen Florida deal with Hurricane Elsa (then turned Tropical Storm Elsa) and Tropical Storm Fred – both of which weakened before making landfall. Now, local Florida stations are reporting a tropical disturbance is increasing in odds to pass over Florida, bringing heavy rain and winds.

As reported by Orlando Sentinel: “An area of disturbance, forecast to pass over Florida Wednesday night or Thursday morning, has 50/50 odds of becoming the next tropical depression before landfall, according to the National Hurricane Center. As of 8 a.m., a surface area trough associated with thunderstorms and showers over the Gulf of Mexico has a 50% chance of developing in the next 48 hours but stands a decent chance of forming in the Gulf later today with more favorable conditions, the NHC said.”

If the tropical system decides to develop into a tropical storm it will take on the name “Mindy” and be the 13th named storm of the year for the hurricane season. If you’re in or around the Walt Disney World Resort area, forecasters say you can expect showers to be most significant during the day on Wednesday at 60% and falling to 20% in the evening. Thursday’s shower odds will also be at 60% throughout the day. The rain will likely spread into parts of Georgia and South Carolina.

We’d recommend keeping an eye on the reports coming from the National Hurricane Center while visiting the Disney Park. We suspect this tropical system will be easily manageable for Florida residents and visitors as heavy rainfall is the norm in Central Florida. We are thankful that Hurricane Ida kept away from the most magical place on earth, however, our thoughts are with all those that were impacted by the storm. Stay safe, Disney fans!