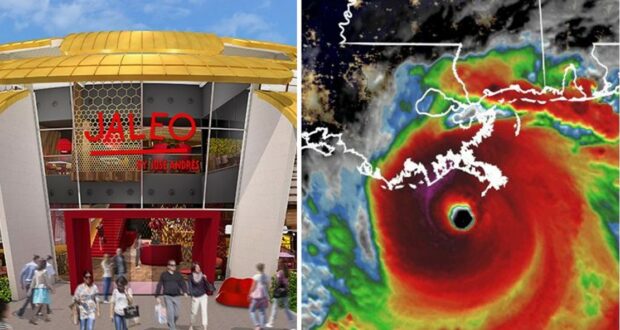 It has been a rough few days for millions of Gulf Coast residents that have been in the wake of Category 4 Hurricane Ida. Ida made landfall in Louisiana on Sunday, August 29, and millions have been without power since bringing back memories of the devastating Hurricane Katrina that made a direct hit of that area 16 years ago. Several rescue teams went out once daylight broke to assist those in need. Unfortunately, without power for many – including the entire city of New Orleans – a cooked meal is hard to come by. Here enters Celebrity Chef Jose Andres… the fantastic Chef that runs the popular JALEO restaurant located at Disney Springs West Side.

If you haven’t dined at JALEO by José Andrés yet, you’re missing out. The massive restaurant isn’t only a stunning piece of art on the outside, but the inside venue is simply wonderful. If you think the atmosphere is right – just wait until you try the delicious Spanish cuisine imagined through the creative lens of Chef José Andrés and his team. Chef José Andrés shouldn’t only be praised for knowing how to dish out one-of-a-kind bites at Disney Springs – but his heart is in his food.

Humanitarian Jose Andres is also the Chef and Founder of World Central Kitchen (WCK), a not-for-profit non-governmental organization devoted to providing meals in the wake of natural disasters. Founded in 2010 by celebrity chef José Andrés, the organization prepared food in Haiti following its devastating earthquake. Not only is the WCK team still in Hati helping with the recent devastation there, but Chef Andrés is currently feeding the hungry and powerless people of New Orleans and surrounding areas by providing a warm meal to those in need.

Before the Hurricane even made landfall, Chef Jose Andres was prepared for the natural disaster as shared in the tweet below on August 29 by stating, “Tomorrow morning as soon as it is safe our teams will go out & start making meals and & delivering to the different places that will be in need to do that … We need to be planning ahead not only for the days but for weeks.” Check out the video in the Tweet below:

Another Tweet from Chef Andrés on August 30th states, “Found 20,000 pieces of fresh fruit for @WCKitchen meals! Reporting from our friends AJ’s Produce in New Orleans…no electricity but they jumped in to support! WCK team has been cooking non-stop because no power means no food or shops…We’ve seen many people desperate for a meal…”

On August 31, Chef provided an update: “UPDATE from Houma south of New Orleans, which was directly hit by the eye of #Ida! Major damage all around…We’ve been serving @WCKitchen meals along the way as people lost everything. They wouldn’t let us in the shelter so we set up outside & everyone came anyway.”

Chef notes the locations for the people of New Orleans to go to receive a hot meal:

RELATED: Restaurants with the Best Chefs at Walt Disney World

If you’re visiting Walt Disney World Resort, we highly recommend you stop by JALEO for one of the best of the best meals founds on property. Curious to learn more about the relief effort, WCK’s relief team, and how you can help with their efforts for Hurricane Ida and Hati? Check out all the details here. Stay safe to all the Disney fans in New Orleans and surrounding areas!