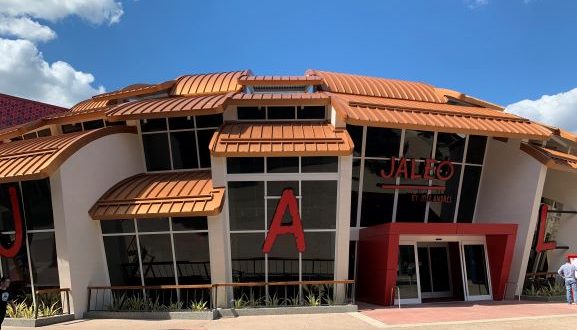 I was lucky enough to go to the grand opening of Jaleo by Chef José Andrés in Disney Springs. My immediate reaction to the restaurant was: “Hey, this place is a party!” That is still true. Dining at Jaleo is truly an experience to behold. Check out these reasons you’ll love it:

Like I said – a total party, minus the balloons. Jaleo is colorful, loud, bustling, and energetic. With its Spanish-influenced décor and unique modern design, the interior is anything but boring. This is not the restaurant I would recommend for a quiet, romantic night out. But it is the one I’d advise for a fun, delicious experience. You’ll love the vibe. My favorite aspect of the atmosphere at Jaleo is when the chefs in the exposed kitchen bang on their pots and pans and shout when the paella is ready! Chef José Andrés is from Spain, so he’s bringing in completely true and authentic flavors. I loved taste testing the small plates at Jaleo because each one was loaded with these cool flavors that I’d never tried before. The depth of flavors in the paella dishes is out of this world. There are layers upon layers in these creations. There are also combinations you wouldn’t necessarily except, like endives with goat cheese and oranges. Sounds weird, I know, but the marriage of these flavors was out of this world. Jaleo is all about small plates – what they call ‘tapas.’ One of the things I appreciate most about this restaurant is that with these tapas, you can try a huge variety of dishes without completely stuffing yourself. You can get big plates too, and they’ll be just as delicious, but I like the fact that there are options.

Oh my gosh, the ham. Jaleo’s imported foods are unbelievably good. The imported ham, or jamon, is unlike anything you’ve ever tasted. For tableside, these options are a bit pricey, but I’d argue it’s worth the splurge. These hams are cured 24-48 months in Spain and sent here to be enjoyed at Jaleo. Most of Jaleo’s incredible cheese options are also imported. Not to mention the wines….wow!

Chef José Andrés is an amazing chef, entrepreneur, and humanitarian. His legacy makes the restaurant even more special. He came to America 25 years ago with dreams to open beautiful, authentic Spanish restaurants and to share his culture. He has done that brilliantly. Chef José Andrés now has two Michelin stars, has been named one of Time Magazine’s “100 Most Influential People” twice, countless awards, and was recently nominated for a Nobel Peace Prize for his outreach in Puerto Rico after Hurricane Maria. He’s awesome, which makes his restaurants awesome too.

Most of the time when you go to a restaurant, Disney or otherwise, the kids’ menu includes basically the same things: chicken tenders, mac and cheese, cheeseburger, etc. Not at Jaleo! The kids’ menu at Jaleo offers a smaller selection of all the wonderful flavors on the adult version. They don’t shy away from good taste for the sake of a younger palate. I love this about them. But don’t worry…there are still “chicken fritters” just in case!

Jaleo offers five different types of paella, a traditional Spanish dish of rice and various meats or vegetables. It’s a Spanish ultimate comfort meal. Jaleo has taken that principle and turned it up a notch, with deep flavors like saffron and garlic aioli. Every night they serve two of the five types of paella. But if you have a paella that you prefer, you can call up to 24 hours in advance to place a special order.

Jaleo is a sit-down, fine/signature dining restaurant – and a brilliant one at that. But if you’re running late, or simply don’t have the time to indulge in a big meal, Pepe might be for you. Right next to Jaleo in Disney Springs West Side, sits Pepe, a casual dining option from Chef José Andrés. Pepe has some of the same great tastes and flavors of Jaleo, while being a bit less expensive and formal (although, to be fair, Jaleo isn’t really that formal). This menu offers mostly sandwiches, but also salads and sangria!