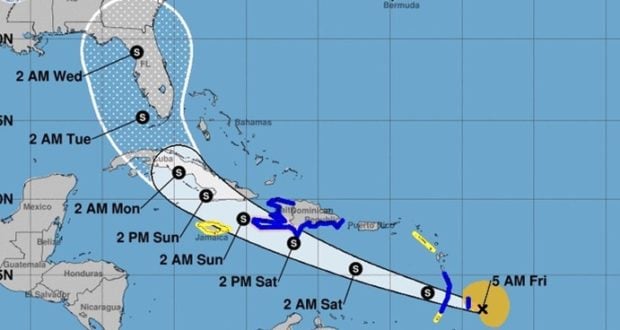 Elsa Becomes a Hurricane & Florida Is On Projected Path

If you’re headed to Walt Disney World early next week, you’ll want to take note as the previously announced Tropical Storm Elsa has turned into Hurricane Elsa… the first hurricane of the year. Florida is on Elsa’s projected path. You’ll want to keep close watch as Elsa figures out where she is headed and how strong she will be when she makes landfall. And yes, we know all those Disney fans out there appreciate the National Hurricane Center naming the storm Elsa!

As shared via OrlandoSentinel: “Elsa strengthened into the first hurricane of the 2021 season Friday morning, according to the National Hurricane Center’s 8 a.m. update. Its five-day projection continues to include a projected landfall in Florida on Tuesday morning.” “As of the 5 a.m. update, Central Florida is still part of Elsa’s cone of uncertainty. The storm is expected to slow down after some land interaction in Caribbean, and is projected to reach South Florida by Tuesday morning. Elsa’s eye is predicted to be passing over Central Florida by early Wednesday, according to the NHC.”

While we hope Hurricane Elsa doesn’t ruin your plans to visit Walt Disney World, keep watch as even the National Hurricane Center has noted this is a hard one to track. Stay safe, Disney fans!

2021-07-02
Jamie Sylvester
Previous: New Red Bull Cocktails Arrive at Disney Springs
Next: Happily Ever After Is Back! Our Experience On Opening Day