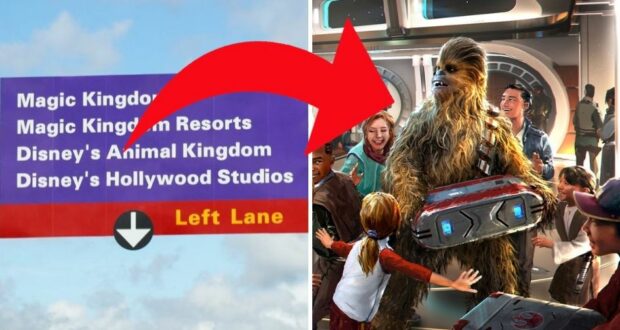 Disney fans tend to notice sign and wall changes! Just recently we have seen the Walt Disney World welcome sign change its color scheme as well as the introduction of the new Lightning Lane signs above attractions within the Disney Parks.

Remember the old clown slide at Disney’s Boardwalk Inn? Well, that has now changed to a new Mickey and friends wall. We’ve also said goodbye to Disney’s Magical Express signs with that complimentary service no longer being available to Disney Resort Guests.

It looks like Disney is preparing for its new Resort Guests and new traffic sign color scheme all at the same time. Both signs show off the new color scheme, removing the former bright purple look with a more subtle almost royal blue tint.

@MillennialMainStreet took to TikTok to show off the new signs as she drove in with the note, “Raise your hand if you’re ‘gets excited over new street signs’ level of Disney fan.” We are right there with you @MillennialMainStreet! Check out the brief video below:

How about you? Are you one of these “gets excited over new street signs” types of Disney fans? Let us know in the comments!

2022-01-27
Jamie Sylvester
Previous: Disney Park Extends Closure Due to COVID
Next: “You bring honor”: The internet is in TEARS over this Video of a Little Girl’s special Disney Park moment with her heroes