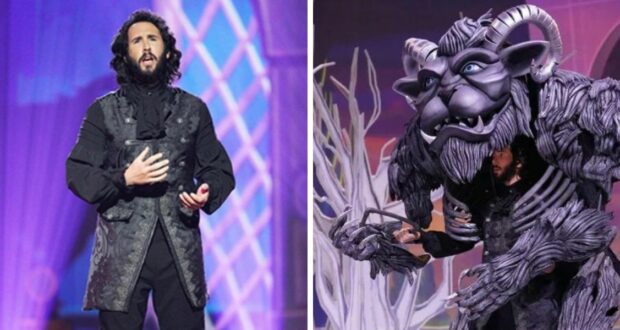 On December 16, ABC will air a special 30th Anniversary celebration of Disney’s classic animated tale, Beauty and the Beast. The special will be an incredible show that combines Disney animation with outstanding live performances. Beauty and the Beast: A 30th Celebration will star music sensation H.E.R. as Belle, Josh Groban as the Beast, Martin Short as Lumiere, David Alan Grier as Cogsworth, Shania Twain as Mrs. Potts, Joshua Henry as Gaston, and Leo Abelo Perry as Chip. The legendary Rita Moreno will serve as the narrator. Earlier this week, ABC gave us a look at some of the incredible costumes that would be in the show, but we did not get a real look at Josh Groban’s Beast character — until now. Groban shared a clip on Instagram that gives us a look at the massive and impressive costume.

Beast mode!! 👹 It was driving me nuts not to share this WORK OF ART costume by @marinatoybina and her team. This costume was a privilege (and challenge) to wear and immerse myself in. She designed it so that the power and size of the beast would be evident but also that I could be seen as Prince Adam “trapped” inside by the prison of the curse. A unique and beautiful take on something seen so many other ways. Here’s a sneak peek at the process and costume for the first time, and I really hope you enjoy the hard work this cast and crew put into this #beautyandthebeast 30th Celebration tomorrow night on @abc!! 🥀

Beauty and the Beast: A 30th Celebration is directed by Hamish Hamilton and executive produced by Jon M. Chu, who has said that he can’t wait for audiences to see what they have accomplished. Chu has also said that Paige O’Hara — who voiced Belle in the original animated film — will make a special appearance. It was also revealed that there will be a special nod to Angela Lansbury — who voiced Mrs. Potts — who passed away earlier this year.

Beauty and the Beast: A 30th Celebration will air on ABC at 8 p.m. ET and will be available on Disney+ the next day.