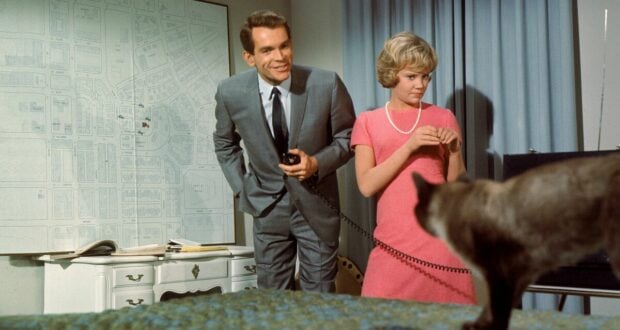 In recent years, Disney has brought some awesome new live-action films to the big screen. Beauty and the Beast, Lion King, Maleficent, and Aladdin among others were all awesome live-action films we love. But fans know this is nothing new, Disney was doing excellent live-action decades ago. This article is all about classic Disney live-action movies from yesteryear that we love. With so many Disney movie classics that range from films like Mary Poppins and Treasure Island to Escape to Witch Mountain and Call It Courage – we may have to release a part two to this classic live-action Disney films we love list.

The Three Lives of Thomasina

A film set in a fictional Scottish village, the film The Three Lives of Thomasina focuses on a beautiful cat and her little girl, Mary. The story takes a sad turn when Thomasina is involved in an accident and dies. Not to worry- cats have nine lives! We watch as Mary’s beloved Thomasina passes from one life to another, walking through ancient Egyptian temples as she transitions into her second life. After entering her second life, Thomasina returns to her owner, seemingly through the skills of a local woman named Lori who nurses her back to health.

A lesser-known Disney film, Thomasina is a beautiful story of the way pets bring people together, as Thomasina ultimately helps heal a troubled relationship between Mary and her harsh father. This classic Disney film was one of my favorites as a child and, as an adult, provides a lot for viewers to unpack while enjoying the film.

Darby O’Gill and the Little People

Darby O’Gill is known around the village pub and has a reputation for telling tall tales. This well-meaning old-timer has a bit of an obsession with capturing King Brian, the ruler of the leprechauns, and frequently recounts his latest close calls and conversations with the leprechauns over a pint with other villagers.

A struggle between suitors for Darby’s daughter, Katie O’Gill, means that Darby requires the magic of leprechauns more than ever before. As Darby seeks support from the leprechauns, an evil magic rears its head in the form of an Irish Banshee! We bet you’ll want to plan a trip to Ireland after watching this movie.

Related: Disenchanted Pair (Dempsey and Adams) in Ireland For Filming

Make way for the OG survivors – that’s right, I’m talking about the Swiss Family Robinson clan. Inspired by a book written by Johann David Wyss, The Swiss Family Robinson tells the story of a shipwrecked family forced to make a way to live on a rough but beautiful island in the East Indies. Through hard work, innovation, and the support of family, the Robinsons build fortifications to protect them from pirates, cultivate food, build a home and develop a fulfilling and rich life on the island.

A menagerie of exotic animals is collected by youngest son Francis, while the older boys Ernst and Fritz spend days exploring the island and planning for the family’s future. The exotic island backdrop of this film coupled with all the drama and adventure of pirates, a shipwreck, stunning animals, near-death experiences, and competition make this a not-to-be-missed Disney classic.

Not to mention, the Robinson family treehouse is so impressive! If you want to crawl into this story – be sure to visit The Swiss Family Robinson Treehouse walk-through attraction in Adventureland on your next visit to Walt Disney World’s Magic Kingdom.

This next Disney classic film is so satisfying, some may say it’s even better than having steak and ice cream for dinner every night (if you know, you know). Disney’s 1960 classic, Pollyanna, tells the story of an adorable and kind orphan girl who arrives in the town of Harrington to live with her rich, strict, and no-nonsense Aunt Polly Harrington, her namesake.

Little Pollyanna is a breath of fresh air for the town and a joy to everyone she meets. We watch Pollyanna positively impact the people of Harrington as she makes friends and connects neighbors that are isolated, all while reminding everyone that they have plenty to be glad about. From the grouchy (voluntarily) bed exiled Mrs. Snow, to the reclusive and crotchety Mr. Pendergast, Pollyanna’s cheerful and optimistic nature changes hearts and ultimately the trajectory of the town as they band together to make a carnival fundraiser for a new orphanage a success.

Sure, Pollyanna’s fall from the old tree after the carnival is gut-wrenching, but the film ends on a positive enough note as Pollyanna leaves for the train station for medical treatment and the whole town gathers to show their support. This feel-good film is a Disney classic that we love to watch over and over again, it reminds us that we all have something to be glad about.

We can’t talk classic Disney films and not mention the awesome 1961 hit The Parent Trap. This classic follows Sharon and Susan, twins separated at birth by divorced parents. The film chronicles their meeting at summer camp, their hateful antics at camp, the realization they are twins, and a scheme to reunite their parents.

In order to realize their plan, they prepare to switch places at the end of the summer and spend time prepping by learning everything from each other’s habits and lingo to home maps and information about the parents that they’ve never met. Sharon and Susan leave camp and fly to California (Sharon) and Boston (Susan) to put the “parent trap” plan in action.

Hayley Mills put on one heck of a performance in The Parent Trap. Decades later we are still obsessed with the acting, songs, set and of course that incredible California ranch house. The 1998 Lindsay Lohan remake was awesome, but we prefer the original 1961 version of The Parent Trap.

Be honest, you’ve always wondered what curious cats do when they make their neighborhood rounds in the evening. The 1965 Hayley Mills film That Darn Cat! lets us in on what one such cat gets into when he heads out at night.

The film features a beautiful and mischievous blue-eyed Siamese cat named D.C. (short for Darn Cat) that just so happens to walk in on a hostage situation. D.C. pretty much has his run of the neighborhood, spending the evenings checking out nearby houses, snatching food, and exploring the neighborhood.

One evening, D.C. returns home missing his collar and wearing a wristwatch with the word “help” carved into the back panel. D.C.’s owner, teenaged Patti Randall is known for a big imagination and immediately goes to the FBI to loop D.C. the cat in as an FBI informant, as she believes the watch belongs to Margaret Miller, a bank teller that was kidnapped during a bank robbery.

The 1960s wardrobe and vibe of this film coupled with the feline protagonist, cat allergic FBI agent Zeke and the conflict surrounding the robbery and hostage situation make for a fun, funny, and entertaining classic Disney film. From the nosy next-door neighbor who is always judging Patti and her sister, to Zeke and the FBI’s efforts to map D.C.’s nightly neighborhood route without him noticing, this movie is a barrel of laughs.

Listen – we will never not love an Angela Lansbury film. This 1969 live-action and animation mash-up film features Angela Lansbury as witch-in-training Miss Price. Set in 1940 Great Britain, three children are sent to the rural village where Miss Price lives to take shelter in her home during the war.

Miss Price hits some snafus in her witchcraft that ends up leading the children and her into some pretty wild places. Children Charlie, Carrie, and Paul along with Miss Price explore such magical places as Naboombu lagoon, an underwater world, and an island ruled by talking animals.

This underrated Disney film matches gorgeous animation with live-action, taking Miss Price and the children into fictional lands during a tense and dangerous time in history. Who knew that an enchanted bed knob, the original talisman Miss Price casts a spell on, could lead to such a grand adventure?!

2022-03-03
Katie Chapman
Previous: The Best Scallops Dishes in Walt Disney World
Next: Why We Love Aladdin the Broadway Musical 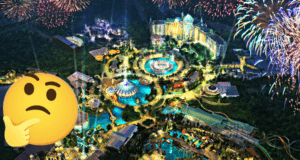