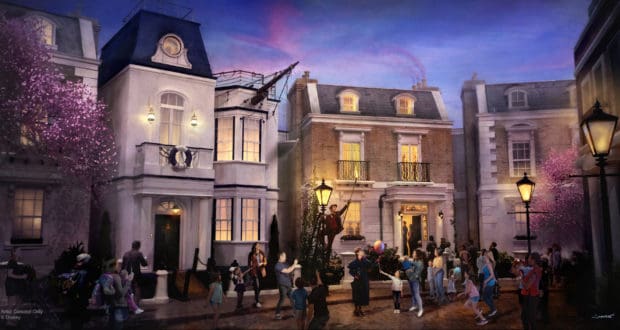 As previously shared, Walt Disney World made the announcement prior to reopening that the remodeling of Spaceship Earth would be put on hold. Now, we’ve learned that Disney has also confirmed that the highly anticipating Mary Poppins-themed attraction is also on hold.

As shared by Spectrum News 13, Disney has postponed the reimagining of Spaceship Earth as well as development on a Mary Poppins-inspired attraction that was set for Epcot’s U.K. pavilion, a Disney World spokesperson confirmed to Spectrum News 13.

The projects, which were announced last year at the D23 Expo, are currently being evaluated, the spokesperson said. No other details were given.

Spaceship Earth was set to temporarily close this summer to make way for a version that would include new narration and new scenes that focused on the “human experience.” Meanwhile, the Mary Poppins attraction was going to include Cherry Tree Lane, giving visitors a chance to enter the home of the Banks family.

A big clue that the status of these projects had been adjusted was their recent exclusion from the Epcot Experience, the walkthrough attraction that gives visitors a preview of what’s next for the park.

The Spaceship Earth refurbishment and the Mary Poppins attraction were part of a larger, multi-year plan to transform Epcot. The overhaul, includes newly-designated “neighborhoods” in the park, a new nighttime spectacular called Harmonious, new pavilions, and a new park entrance.