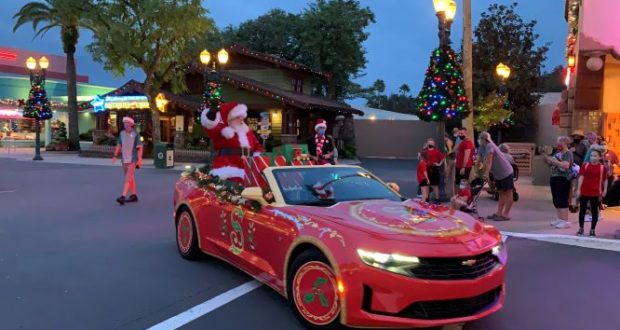 The holidays look different for 2020. There are changes in all four Walt Disney World theme parks, and also at Disney Springs. Possibly the park that looks closest to the 2019 holiday season is Disney’s Hollywood Studios. There are still changes, but they aren’t as drastic as canceling the Candlelight Processional at Epcot or no Holiday Dream Lights on Cinderella Castle.

The Osborne Family Spectacle of Dancing Lights ended on January 6, 2016. It was replaced the following holiday season by Sunset Seasons Greetings. Projections would make the Hollywood Tower Hotel come alive, and there would be light effects and “snow”. The perfect music was the finishing touch. There were several different scenes. Sunset Seasons Greetings became more dramatic every year. The problem was that it would draw crowds, and Disney is trying to avoid that this year. Instead of Sunset Seasons Greetings, for 2020 we have The Hollywood Holiday Tower Hotel. It’s kind of like the lite version of Sunset Seasons Greetings. There are still projections on the Hollywood Tower Hotel, and they are still beautiful. There are no laser lighting effects, there’s no snow, and there is no extra music. It’s still a wonder to watch. There are four scenes, they’re based on “Toy Story”, the Muppets, “Frozen”, and “Mickey’s Christmas Carol”. The scenes aren’t static, there is still movement in each one. A scene will last for five minutes, then it will transform into the next one. It’s fun to watch it change from one scene to the next. Check out a short video of the projection here!

There are no meet and greets with Santa Claus at Walt Disney World this year, but that doesn’t mean that he’s staying at the North Pole! Santa has his own cavalcade at Disney’s Hollywood Studios. He’s joined by some athletic elves. Santa doesn’t need his sleigh (he left that at the Magic Kingdom) because at Disney’s Hollywood Studios he rides in a red convertible! His ride is decked out for the holidays as well. Like the other cavalcades, Santa’s runs at random times throughout the day so that crowds will not gather. Check out Santa’s Cavalcade video here!

As far as holiday decorations are concerned, for the most part it feels like nothing has changed at Disney’s Hollywood Studios. The tree is in Echo Lake, and there are giant Christmas ornaments in the water as well. On the other side of Echo Lake, Dinosaur Gertie has turned into Santa Gertie for the season.

There are other decorations in the front of the park. Garlands line Hollywood Boulevard, and there are other lights and ornaments. You’ll also find everything from reindeer to kids in a teacup. The decorations are all in the front of the park. There doesn’t seem to be any additions to Toy Story Land like in the past, and it doesn’t look like they’re celebrating Life Day in Galaxy’s Edge. If you head towards Rock ‘n’ Roller Coaster you’ll hear Christmas music, but the decorations didn’t make it that far.

Olaf fans will not want to skip For the First Time in Forever: A Frozen Sing-Along Celebration. There is a special seasonal ending that we won’t give away. Since there are so few live shows right now you will want to watch anyway. It’s a great production any time of year, and it’s nice to have a place to sit down and be entertained for a little while.

There aren’t that many character meals at Walt Disney World at the moment, but you’ll find one that is unique at Hollywood & Vine. That is where you can experience Minnie’s Seasonal Dining. Until January 4, 2021, Minnie’s Holiday Dine will take place. The characters are dressed for the holidays, and there are plenty of seasonal touches. Remember, character dining has been modified for the time being. Characters will not come close to your table, but you’ll still be able to see them and get some great pictures.

With the exception of Minnie’s Seasonal Dining, the holidays will run through December 30 at Walt Disney World. There may be no fireworks and no full parades right now, but that doesn’t mean that the holidays aren’t merry and bright at Disney’s Hollywood Studios. One look at Santa Gertie is enough to put a smile on your face; even if no one can see it because of your face covering.

2020-11-12
PaulaK
Previous: This Is The Way To Make An Adorable Treat: Mandalorian-Inspired Recipe
Next: Disney World Park Hours Available Through January 23 with Reduced Hours for Epcot