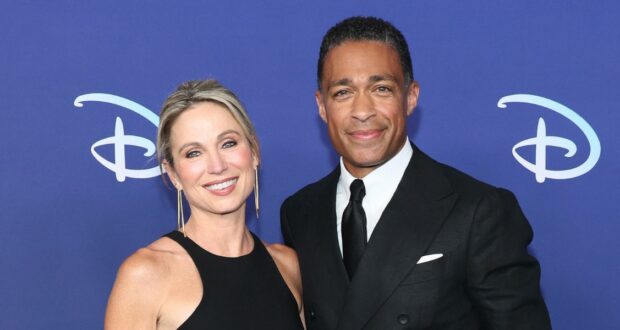 Earlier this month, Good Morning America found itself the subject of numerous headlines, instead of being the ones reporting the headlines. The trouble began when photos of the co-anchors of GMA3 — Amy Robach and T.J. Holmes — holding hands and enjoying an intimate weekend together were shared by Page Six and The Daily Mail. Both reporters were believed to be married. Affair rumors quickly made the rounds, and the reporters wound up becoming the main story. Both came out and said that they had separated from their respective spouses before they started dating. After the story broke, Holmes and Robach continued to host together without acknowledging their relationship. However, their alleged affair continued to dominate the headlines, and now, we are learning that ABC — which is owned by The Walt Disney Company — has placed the pair on paid administrative leave, pending an investigation. The news was shared by ABC President Kim Goodwin on an editorial call, part of which was shared with The Hollywood Reporter:

“I want to say that while the relationship is not a violation of company policy, I really have taken the last few days to think about and work through what I think is best for the ABC News organization,” Godwin said, per a source who was on the call. “These decisions are not easy, they are not knee-jerk, but they are necessary for the brand and for our priority which, you guys know, are all of us — the people here at ABC.”

Godwin added that Gio Benitez and Stephanie Ramos will be anchoring the third hour of Good Morning America for now. She also added that she won’t address the matter on the call again until there is more to be said. 2022-12-06
Krysten Swensen
Previous: Brand New Information About Universal’s Epic Universe Reveals a One of a Kind Park Design
Next: Man Who Committed Suicide at Disneyland Posted a Long Explanation on Facebook Hours Before