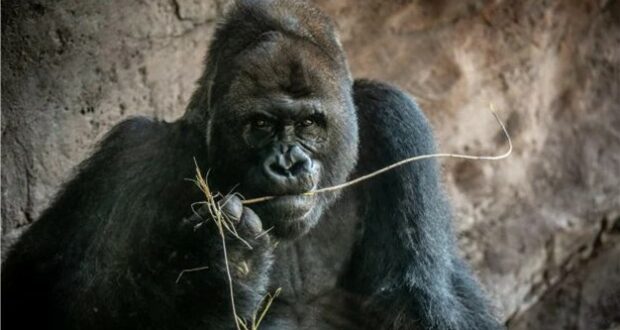 Disney to Hold Birthday Party for Its Oldest Gorilla

Disney’s Animal Kingdom has been home to thousands of animals since it opened 24 years ago. Gino was an opening-day animal at the Park and can be seen when visiting Gorilla Falls Exploration Trail through a large window which he regularly sits near for Guests of all ages to adore.

The 400-pound silverback is a fan favorite for Disney Guests and Cast Members, so it’s no wonder Disney is stepping up to celebrate the big guy’s birthday on December 30, 2021. Gino will be turning 41!

Gino has helped with Disney’s conservation and species survival plan for gorillas around the globe as being one of the first gorillas in the world to allow the animal care team to perform cardiac ultrasounds without anesthesia. Disney notes, “Cardiac disease is one of the leading causes of death in gorillas, and anesthesia can place an extra burden on their heart. Gino’s contribution has paved the way for a more accurate reading of his own heart health, and these methods have been adopted by dozens of zoological facilities who have been able to train these behaviors with other gorillas for procedures without anesthesia.”

Check out one of the two Gino videos below:

Be sure to drop by Disney’s Animal Kingdom on December 30, 2021, to wish Gino and happy birthday and hopefully have a chance to spot him with his birthday cake!

Have you ever spotted Gino at Disney’s Animal Kingdom? Let us know in the comments.