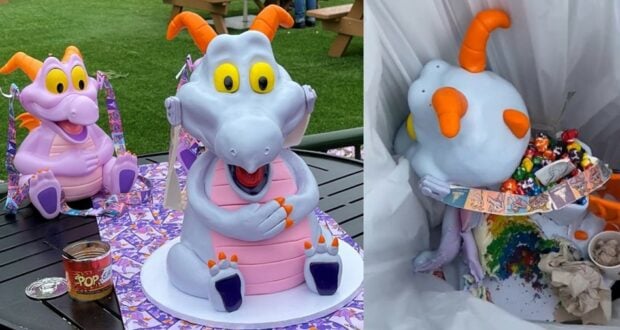 The EPCOT International Festival of the Arts is welcoming Guests to Disney Park. The highly sought-after Figment Popcorn Bucket available at the EPCOT Festival caused LONG lines as Disney fans hoped to snag the beloved popcorn bucket. This Figment fan however worked her magic in creating an incredible Fightment Popcorn Bucket CAKE!

The Figment Popcorn Bucket has been buzzing around Disney social media recently. We’ve seen magical moments where a Disney fan purchased an extra popcorn bucket and gave it to a Figment fan waiting in line. We’ve seen Universal make fun of Disney fans for their love of popcorn. And even resellers are having fun with the bucket by putting it online and hiking up the price.

But, who would have thought to create the popular bucket in cake form? Well, one talented baker took on the challenge and wowed Disney fans. @JillycakesBakes tweeted, “How vivid is your imagination? What do you see in your dreams?” Check out the impressive Figment popcorn bucket cake below!

@ryno1185 took to Twitter to share more photos of the fantastic cake which was brought into EPCOT with, “My incredibly talented friend @JillycakesBakes made a #Figment Popcorn Bucket cake! It had the strap and rainbow popcorn AND it was rainbow cake on the inside!! Just wow!”

But of course, it’s cake after all. Unlike the collectible popcorn bucket lasting forever, the Figment Popcorn Bucket cake met its fate in a Disney trash can. Disney Guests @baiIeybroussard replied to the @MagicbandManiac photo with a video of the cake in the trash, noting “I found this cake in the trash can earlier. They barely even ate it”:

A tragic ending to the perfect cake! We can all agree that while we wish we could have had a bite of this goodness before it ended up in the trash, we are SUPER impressed this talented baker created such a fun Disney cake AND carried it into the Park. Well done, @JillycakesBakes!