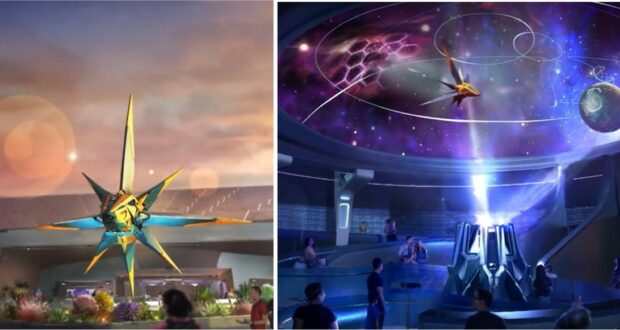 EPCOT’s New Coaster Is In Its “Final Stages”

It’s no secret Walt Disney World Imagineers are hard at work transforming EPCOT’s Future World into a whole new experience. Of course, the buzz lately has been surrounding what’s going on over in EPCOT’s World Showcase portion of the Park including the new Remy’s Ratatouille Adventure attraction and new nighttime spectacular, “Harmonious” – both set to debut on October 1 for Walt Disney World Resort’s 50th Anniversary Celebration. While many Future World classics are staying put, several experiences are getting an upgrade. Club Cool featuring Coca-Cola has been reimagined, along with EPCOT’s new flagship shop called “Creations” – both scheduled to open “soon”. Future World’s newest restaurant, Space 220 is scheduled to open this month with no exact date just yet. We’ve even seen EPCOT’s Spaceship Earth undergo a transformation as it prepares to become a Beacon of Magic. One of the theme Park’s projects that seems to have been placed on the back burner during COVID-19 has resurfaced in discussion as Walt Disney Imagineer, Zach Riddley provides an update for EPCOT’s first-ever coaster in its “final stages”.

While announcing the addition of Rocket and Groot to Disney’s Fab 50 character sculptures, Zach Riddley shared on Instagram the following Guardian’s of the Galaxy: Cosmic Rewind” update: “We are deep in the final stages of preparing our first Other World Showcase pavilion at EPCOT with our Guardians of the Galaxy: Cosmic Rewind attraction! This stunning new addition to EPCOT will feature some firsts for the Park – our first roller coaster attraction, a brand-new storytelling coaster technology, and one of the longest indoor coasters in the world! This is a story and a set of characters that expand EPCOT’s strong legacy of real science brought to life in fantastic ways – discovering the wonders and mysteries of our galaxy and galaxies beyond. We are excited to soon welcome Rocket, Groot, and other members of the Guardians of the Galaxy to EPCOT and to take us on an adventure that’s truly out of this world!! I cannot wait to see this statue in EPCOT for #DisneyWorld50!”

RELATED: What We Know So Far About Disney’s Guardians of the Galaxy: Cosmic Rewind

Construction for the EPCOT coaster was scheduled to be completed in the fall of 2021 so that the ride’s debut would coincide with the kickoff of WDW’s 50th-anniversary celebration. Unfortunately, it’s looking like a 2022 opening seems much more likely at this point. We’re thrilled however to hear the words “final stages”! While we can’t get enough of Rock n Roller Coaster Starring Aerosmith at Disney’s Hollywood Studios or Expedition Everest at Disney’s Animal Kingdom – EPCOT is due for a coaster! Hopefully, we’ll be able to experience the galaxy roller coaster at EPCOT soon enough. In the meantime, we’ll keep you posted with any further Disney Park and Guardians of the Galaxy: Cosmic Rewind news!