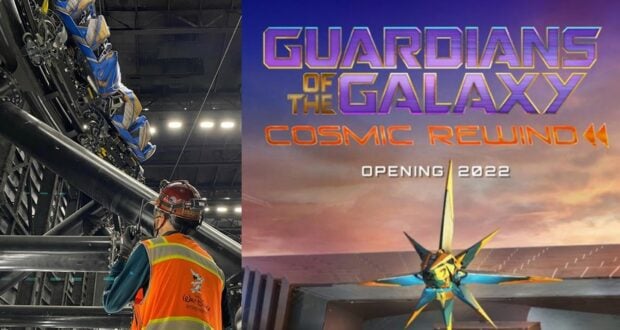 It doesn’t matter if you’re a Disney fan, Marvel’s Guardians of the Galaxy fan, a roller coaster junkie, or all of the above… EPCOT’s Guardians of the Galaxy: Cosmic Rewind is one attraction we’ve all been waiting for! First announced to open in 2021 in time for Walt Disney World Resort’s 50th Anniversary, we’ve been doing our best to wait patiently for the arrival of this attraction. With Disney’s recent announcement that the coaster will officially arrive in 2022, we’re eagerly awaiting a grand opening date. In the meantime, Disney Imagineers are hard at work making Disney history!

RELATED: First Look Inside Guardians of the Galaxy Cosmic Rewind at EPCOT

Currently under construction in the former location of Ellen’s Energy Adventure, Guardians of the Galaxy: Cosmic Rewind is already towering over the new “World Discovery” neighborhood (former Future World) of EPCOT. You can’t miss the massive building as you walk in from the EPCOT parking lot or ride the EPCOT Monorail through the Park. But, did you know that while much of the attraction experience has been top secret, there are so far TWO announced firsts for Disney?

RELATED: What We Know So Far About Disney’s Guardians of the Galaxy: Cosmic Rewind

RELATED: Filming Has Yet To Happen for EPCOT’s Guardians Of The Galaxy Attraction

The first reverse launch on a roller coaster experience in Disney history, PLUS another first for Disney and the world as one of the longest enclosed coasters on Earth! That’s ridiculously impressive, and we simply can’t wait to experience the attraction. In the meantime, you can check out the video below of the ride vehicle and system. The Omnicoaster is a first-of-its-kind programmable roller coaster ride system, where Guests can be rotated along the ride track in any direction while traveling at high speeds. Happy watching!