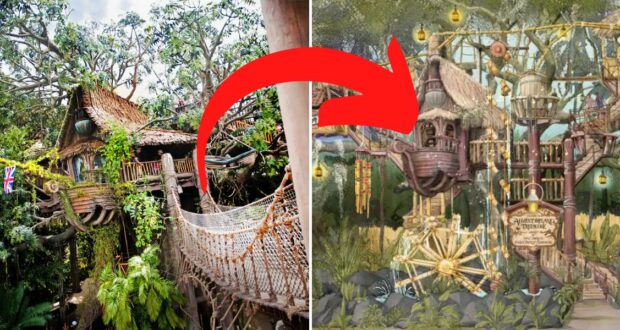 The Disneyland Resort’s beloved treehouse, formerly known as Tarzan’s Treehouse, in Adventureland at Disneyland Park, has been closed for refurbishment since September 2021. While Disney fans have eagerly speculated what may come of the attraction, Disney has finally dropped the new details.

With the closure of Tarzan’s Treehouse, much speculation stirred, with Disney Park fans hoping there could be a touch of the beloved Encanto (2021) film involved in the refurbishment.

Instead, it looks like Disney has decided to go back to its roots. The retheme will feature Swiss Family Treehouse (1962), which the attraction was previously themed as before it became Tarzan’s Treehouse in 1999 after the debut of the Disney film, Tarzan.

@DisneyParks took to social media to share, “We are tree-mendously excited to share new details about the Adventureland Treehouse returning to @Disneyland park in 2023!”

The details from Disney Parks Blog go on to note:

“The Adventureland Treehouse will showcase wonderous new environments created amongst the branches of a giant tree on the shores of the Jungle River, where guests will once again enter by the giant waterwheel and follow the wood rope stairways up, up, up into the boughs.”

RELATED: Part of Iconic Attraction to Be Demolished During Retheme

“Here, you will find fascinating rooms that the family in this new story created for one another. From the mother’s music den (as depicted in the concept art above) and the young sons’ nature room to the teenage daughter’s astronomer’s loft, all things are fashioned from found objects, natural resources, and pure ingenuity.”

“For those who would rather stay on terra firma, the bottom floor will showcase an ingenious kitchen and dining room, along with the father’s art studio, displaying hand-drawn sketches and paintings of each of the rooms.”

The news of the details about the new Adventureland Treehouse coming to Disneyland Park debunks any rumors of the location becoming a future Encanto attraction for the Park.

Instead, Disney seems to have taken a step back in time, bringing the same Swiss Family Robinson Treehouse feel that is currently at Magic Kingdom Park to Disneyland Park.